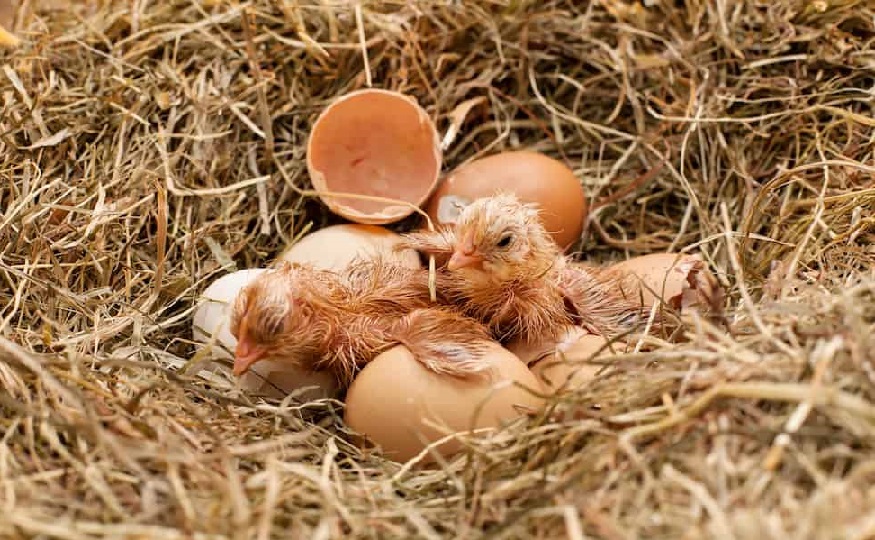 It’s the moment every chick parent dreads. After waiting patiently and carefully tending your eggs for 21 days, they finally begin to hatch—but something’s not right.

Instead of the healthy fuzz balls you anticipated, one (or more) of the chicks have what appears to be their intestines outside of their body.

The condition of intestines presenting externally is referred to as gastroschisis, which, unfortunately, carries with it a poor prognosis. Fortunately, true gastroschisis is rare and frequently confused with other potentially more treatable issues.

If you have a chick hatch with what appears to be its intestines out, it is not necessarily an immediate death sentence. Keep reading to discover how to properly diagnose a true instance of gastroschisis, find out what caused it, how to treat it, and how to prevent it from occurring again with your next hatch.

Although it can be quite alarming to see intestines protruding from your newly hatched chick, it’s important to stay calm and first assess the situation. A proper diagnosis is key to providing your chick with the best chance of survival. There are a few key things about chicks you should know before proceeding with any course of treatment.

Gastroschisis Is Frequently Confused (and Associated) With Other Issues

There are 4 common instances of internal organ exposure:

Although the nature of the protrusion can vary, it is described as looking like a fleshy bulge. This bulge will appear alongside the chick’s navel. Umbilical hernias can arise spontaneously or due to an assisted hatch resulting in trauma to the umbilical cord.

A prolapse most frequently occurs from a chick’s vent. The vent is also called the cloaca. That is the orifice from which waste is expelled, and eggs are passed in adult hens. Organ prolapse from the vent is frequently associated with bacterial infections.

The chick normally absorbs the yolk sac in the last days before hatching, providing fluids and nutrients for the first days of life. However, a variety of conditions can contribute to the chick hatching before the yolk sac is fully absorbed. An unabsorbed yolk sac is also called an “open navel” and frequently leads to an infection called omphalitis.

As mentioned previously, gastroschisis is the condition in which your chick’s intestines are truly spilling out. This is a severe condition, and possible treatments will be outlined in this article. Gastroschisis can be distinguished from the previous conditions in this list by properly identifying the intestines.

How to Differentiate Exposed Intestines from Cloaca

Generally speaking, exposed intestines will be bluish-red in color. Additionally, the intestinal “loops” are a telltale sign that can distinguish them from other organs. After hatching, these loops are relatively obvious and may even be wrapped around your chick’s leg.

Interesting READ  Why Do Chickens Peck Each Others Bottoms

Intestines will also most commonly be exposed alongside the navel instead of the vent (cloaca). The vent is located underneath the chick’s tail feathers, and the navel is above it (depending on which angle you’re viewing) on the belly.

Because the conditions in this list often occur simultaneously, proper identification can be confusing. Being informed is one of the best ways you can help your newly hatched chick.

What To Do If My Chick Hatches With Its Intestines Out

Once you’ve reviewed the information above and you’re confident you’re dealing with exposed intestines, you have a few options. As mentioned previously, gastroschisis in chicks carries with it a poor chance of survival. However, success stories, although rare, are not unheard of.

If you find yourself the unlucky parent of a chick with gastroschisis, you ultimately have 3 options:

Seeking help from a licensed veterinarian is, of course, in your chick’s best interest. The benefits of a veterinarian include not only years of experience but also access to proper instruments and a sterile environment.

However, a vet may not be in the best interest of your bank account, especially if several chicks from your hatch require care. Vet rates vary by location, but a rough estimate of the necessary procedure ranges from $200-$400 per chick.

If you don’t have an extra $200+ to spend to possibly save a chick, you’re not alone. Chicken keeping forums and threads are rife with hobbyists swapping their amateur veterinary techniques to treat this issue.

Although it should be reiterated that a chick’s prognosis is poor even with professional help, it can be worth it to try and save your chick at home. The most commonly referred course of home treatment is as follows:

At this point, there is not much else you can do for your chick. Be sure to place them in a brooder with the appropriate temperature, food, and water. Be sure to keep their conditions as sanitary as possible to reduce further risk of infection.

Although it can be difficult to accept, there are times when culling your chick is the most humane course of action. If the chick is listless, not eating/drinking, or appears to have labored breathing, the best option is to put it out of its misery.

This can be done using a very sharp pair of scissors and snipping off the chick’s head. It can be a disturbing process, but just remember you are putting an end to your chick’s suffering.

Interesting READ  What Time Do Chickens Go to Bed? Explained!

What Causes a Chick to Hatch With Its Intestines Out?

There are a number of reasons your chick may have hatched with its intestines out. As previously stated, intestinal exposure is a complicated issue often compounded with other diagnoses. Even though it can be hard to pinpoint one single cause of gastroschisis, there appears to be a strong correlation between the condition and improper incubation conditions.

A mother hen knows instinctively when to rotate her eggs. When the hen leaves her eggs or is replaced by artificial incubation, this rotation needs to be done manually or automated with a built-in turning function. If eggs are not turned properly, it can cause organs to stick to the side of the shell resulting in deformities like gastroschisis.

Almost all deformities and mortalities that occur during hatching can be attributed to temperature and humidity problems. These include unabsorbed yolk, navel infections, gastroschisis, and overall failure of the chick to thrive.

Although an overwhelming presence of bacteria can result from poor sanitation, it is also a common subset of improper temperature and humidity.

When the temperature and humidity are too high, too low, or too variable, it creates optimal conditions for bacteria to thrive. A heavy bacteria population can easily disrupt and overwhelm the delicate intestinal biota of new chicks.

How Can I Prevent This From Happening Again?

If you’ve recently been through the gamut of diagnosing, treating, and possibly culling a young chick with its intestines out, you’re likely asking yourself how you can avoid this in your future broods.

Invest In A High-Quality Incubator

The next best thing to allowing a mother hen to naturally hatch her eggs is to invest in a high-quality incubator.

While mother nature has fine-tuned the process of rotating and incubating eggs, there are a number of reputable incubators on the market that can perform this function almost as successfully as a hen.

Do Not Interfere With Hatching Process

Ideally, if you have invested in a high-quality incubator and carefully monitored temperature and humidity levels, you and your chicks will have a pleasant hatching experience.

Unfortunately, the laws of nature have a mind of their own, and many times you may still find a chick struggling to hatch.

It may be tempting to rush to your struggling chick’s aid, but it is important not to rush this decision. The hatching process is a fragile one that can easily be disturbed.

Frequently, many of the conditions outlined in this article are caused by mishaps during an assisted hatch. It is never recommended to help your chick hatch unless it appears to have no chance of survival without intervention.

A chick hatched with its intestines out is a dire situation with a slim chance of survival. There are methods that may be used both at home and by a veterinarian that can increase your chick’s likelihood of viability, but their margins of success are narrow. You may need to consider culling or allowing the chick to expire on its own.

If temperature, humidity, rotation, and sanitation are all kept at optimal levels, you have a high likelihood of success in your future broods.

Will a Rooster Kill a Hen? Shocking Truth!