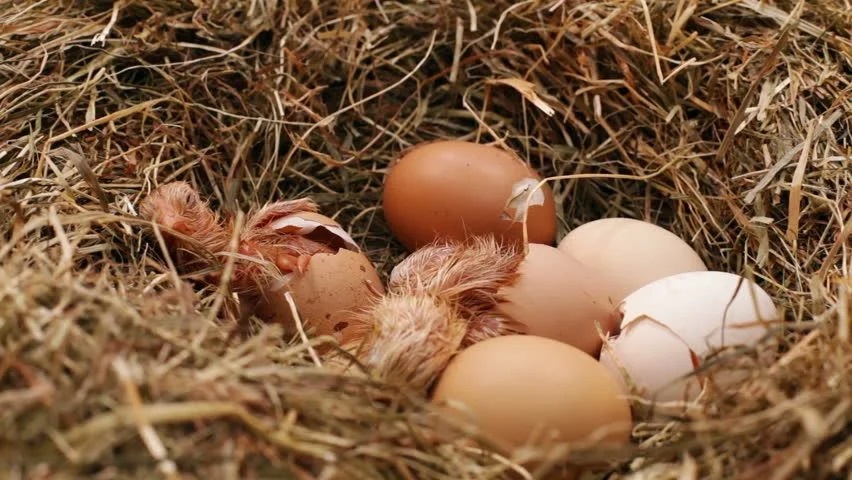 You are ready to add to your chicken flock.  Your rooster is raring to go. Your broody hen is ready to become a mother.  All the conditions seem just right.  But 21 days pass, and no new chicks make an appearance.  What happened?

There are ways to determine if your chicks have died in the egg or are still viable throughout the incubation process.  By keeping an eye on the eggs during this time, most of the guesswork surrounding whether or not you should expect to have new members of your flock within those three weeks should decrease significantly.

There are many reasons chicks die in the egg, and determining the cause of their demise could be helpful in successful future hatches if the reason they failed is preventable.

Contents
How to Tell if an Egg Is Alive or Dead
Why Did My Chick Die in the Egg?
If a Chicken’s Egg Is Cracked, Will it Still Hatch?
Wrapping Up

How to Tell if an Egg Is Alive or Dead

To determine the viability of your eggs, candling them periodically throughout the process will let you know if the chick is still alive or if it has died at some point during incubation.

What Is Candling, and Is it Safe?

Candling is the process of holding the egg to a light source to determine whether or not the egg is still fertile.  You can purchase devices explicitly made for candling, or you can make your own with a few materials and simple steps.

With your device in hand, in a dark room, with the large end up the egg up, the light will shine on the egg, allowing you to get a glimpse of the development taking place inside the shell.

As fertilized eggs are incredibly fragile for the first four to seven days of incubation, it is not recommended to begin candling too early to prevent damaging the embryo.  Even once it is safe to start candling your eggs, you want to be very careful when handling them, and you do not want to candle them too often.

Viable embryos will quickly respond to the light from candling, while embryos that take more than 30 seconds to respond are more than likely sick or dying.  If they are sluggish or do not respond, they should not be returned to the nest.

During this process, you will also be better able to see if an egg is cracked, something you might not notice with the naked eye.  While it is recommended to discard cracked eggs, later, we will look into how you can attempt to repair and save a cracked egg if the embryo is still alive.

As the incubation period progresses, knowing what a healthy embryo should look like at different periods will let you know whether or not your chick has died in the egg.

Again, you do not want to handle an egg before day 4, and it is advisable to wait until at least day 7 to ensure you allow the embryo time to set.

Interesting READ  Where Do Chickens Like To Be Petted?

A viable embryo will have look like a dark spot and have veins spidering out from it.  It should also show movement within seconds of being candled.

There will not be much room left inside the egg at this incubation stage, as the developing chick will have taken up most of the space.  The area not filled by the chick will be an air pocket.

You should also detect movement from the chick inside the egg, which will be a good sign that it is still on track to hatch.

This is the absolute last day you should candle your eggs, as the chicks are now preparing to hatch.  If they are still alive, their necks should be turned up toward the top of the egg so that, on hatching day, they will be able to peck their way out of the shell.

You should also be able to hear a faint peep in addition to seeing movement.

My Egg Does Not Look Like it Should When Candled

If the embryo does not look as suggested and no movement is detected during the incubation period, it has probably died inside the egg.

Your embryo is probably not viable if:

Why Did My Chick Die in the Egg?

There is a myriad of things that could cause a chick to die before it is hatched.  Some of the causes are preventable, while others are simply nature at work.

If you can detect a reason for the embryo’s death, hopefully, you will be able to use that information to prevent future pre-hatching deaths.

If it occurs at the beginning of the process, it can usually be attributed to some sort of deficiency in the embryo.  The most common deficiencies found in early embryonic deaths are:

Because the deaths occur so early on, they are challenging to detect.

Deaths that occur in the later stages of development can often be contributed to:

Recording for the Future

It is suggested that you keep a record of the mortality of your eggs.  If they do not hatch, note the approximate day they died.  Also, through candling or opening the egg after it does not hatch, see if you can determine the cause of the chick’s death.

This process will help you with future hatches.

Another Important Factor to Consider

Interesting READ  How Long Does Shock Last In Chickens?

If any of these factors appear genuine for your rooster or hen, then it is highly suggested that you care for their health before trying for more chicks.  Otherwise, you can expect the same results.

If a Chicken’s Egg Is Cracked, Will it Still Hatch?

When candling your eggs, if you notice they are cracked, but the embryo still appears to be viable, you are now faced with a decision: remove the egg from the nest or try to repair it.

The issue with attempting to hatch a cracked egg is that bacteria will enter the egg VERY quickly, which will ultimately cause the chick to die.  If you believe you have caught the problem in time, you can repair the egg to see if the chick will hatch.

How to Repair a Cracked Hatching Egg

Generally speaking, repairing a cracked egg is not recommended unless you know precisely when the egg became damaged.  As bacterial is introduced into the egg quickly once it is cracked, the odds of the chick living until it is hatched are negligible even if you repair it.

If you decide to go ahead and try to save the egg, there are a few recommendations as to how to reseal the egg, and there does not appear to be one “correct” method.

Most suggest carefully using a mild disinfectant to wipe away any bacteria on the egg’s surface before repairing.

Once cleaned, some of the ways to attempt to reseal the cracked egg include:

After candling the egg in a day or two, allow the chick to try to hatch if the embryo still appears viable.  If the embryo is dead, remove it from the nest.

The process of incubating eggs in the hopes of producing healthy chicks is a delicate process that is mainly left up to chance.  The best odds that your potential chicks have is to ensure that their parents are healthy before the hen lays her brood and do all you can to keep the nest safe during the incubation period.

Candling the chicks at various points during incubation will allow you to determine if the egg is still viable or not.  It can also alert you to cracks in the shell, allowing you to decide whether or not you want to try to save that egg.

Determining when the chick died and the potential cause of the chick’s death can possibly help prevent a high mortality rate in the future.

Do Chickens Get Sad When You Take Their Eggs?