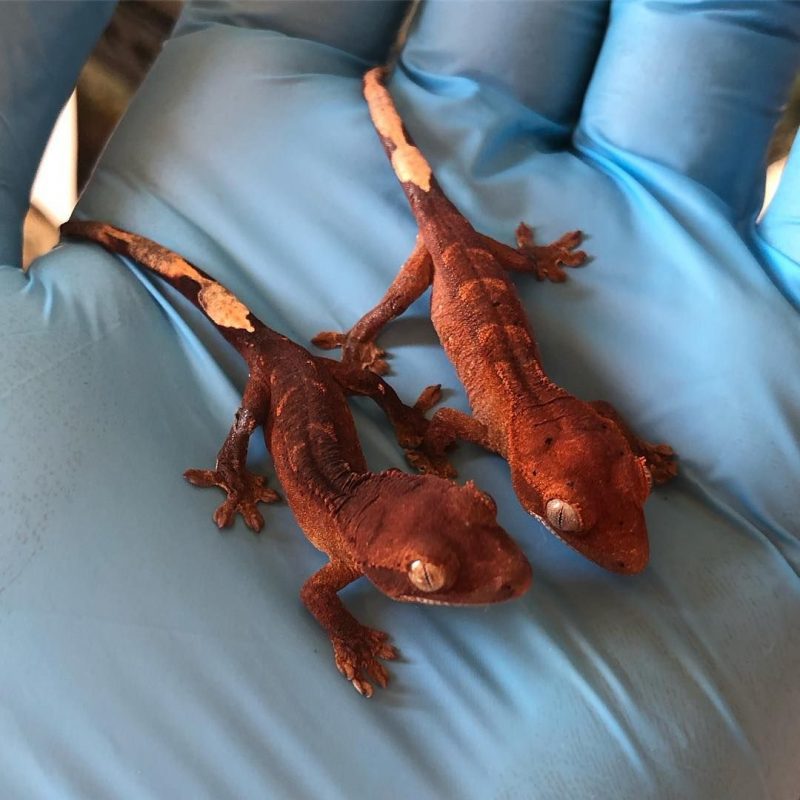 Crested geckos are interesting lizards with very striking, distinctive appearances that make them hard to miss and even harder not to love. These lizards are so fun to keep and offer a lot of entertainment with their sassy personalities.

Can You Put Two Crested Geckos Together?

So, generally, crested geckos can live together as a small group. They regularly do in the wild and are typically fine.

That being said, it is important to keep only one male per enclosure. Male crested geckos are prone to fighting and can potentially seriously injure each other if they are caught up in a battle and neither gecko backs down.

They can even end up killing each other, so this is a social pairing that should not happen with your pet crested geckos.

Females, however, do not fight often. There are outliers that may be more aggressive or territorial but, for the most part, female crested geckos are the more docile gender and will not outright attack or fight with other geckos within the enclosure.

Some of the best pairings are two to three female crested geckos, one male and one female, or one male and two females. With many breeders and hobby keepers, two to three seems to be the magic number for the amount of geckos that can be safely had within an enclosure.

This is because crested geckos do require a lot of food and care and having more than three can make it harder to ensure every gecko gets the care that it needs. Similarly, it can also lead to the geckos being more stressed and prone to fighting, even with females, because there is less space for them to get away from each other when tensions do arise.

If you want to have more than a trio of crested geckos, you need a much larger enclosure with a lot of dense foliage for hiding and tons of climbing areas so they can easily escape one another.

It is important to also note that having male and female crested geckos in one enclosure can result in the production of eggs. Geckos are prone to becoming gravid, which means they will produce eggs and, potentially, baby crested geckos.

If you are unprepared for this type of situation, you likely need to opt to have your enclosure stocked with only female geckos. This will prevent the issue and allow for a simpler experience without any concerns of reproduction.

Appropriate Sizing Of The Pair

One of the biggest things that goes wrong when people attempt to house crested geckos together is one eating the other. This is not common when the geckos are roughly the same size but if you place a baby or juvenile crested gecko in an enclosure with a larger adult, your smaller crested gecko is going to likely become food.

Interesting READ  Can Geckos Swim? What To Beware Of

Crested geckos regularly commit cannibalism in the wild and will eat almost any living thing that can fit in their mouth. This includes baby or smaller crested geckos.

So, if you already have a larger gecko and see a cute little baby one, or vice versa, it is best to leave the situation alone. The last thing you want is your little pet becoming a meal for your larger gecko, which is almost certain to happen, as sometimes crested geckos even commit cannibalism when other food sources are available.

The larger one can also choke on the smaller gecko if it gets stuck in its throat or become impacted and develop a very serious illness as a result of not being able to pass the smaller gecko through its digestive system.

Due to this, it is always advisable to avoid placing smaller geckos with larger ones. It is simply not worth the risk.

If you still want both sizes of crested geckos, you should have two separate enclosures with securely locking tops. It is even recommended to keep the gecko enclosures away from one another because if the larger is particularly aggressive or hungry, it may decide to make a break for it and hop into the smaller gecko tank for a snack if it is able to escape.

Lids, locks, and distance are your friend in these situations if you want to house both sizes in separate tanks safely and without the risk of tragedy striking.

What Size Tank Do I Need For 2 Crested Geckos?

Ideally, your crested geckos will be kept in an enclosure that is made of glass that is long enough to create two different temperature zones, one for basking and one for cooling off. In general, it is recommended that a crested gecko enclosure be at least 29 gallons for three geckos.

If you can find one, a 20 gallon high style tank that is taller in height will do the trick nicely, too, as crested geckos are arboreal and like to be able to climb.

You should also include an escape-proof top to ensure your crested geckos do not make a break for it. They are excellent climbers and, due to this, can escape enclosures that are not secure enough to hold them in.

Things like mesh tops are a good idea, as they allow airflow but can be secured down to help ensure your geckos are not going to get out and risk becoming lost or getting hurt. It is always better to be safe than sorry!

What to Do If Your Crested Geckos Begin Fighting

Sometimes, even with the best care possible, crested geckos will begin to fight. It is just part of their nature that when something is wrong or they feel threatened, they will sometimes fight.

Interesting READ  Why Is My Leopard Gecko So Skinny? How To Fatten It Up?

Some geckos are also just more aggressive than others, even if they are females. When this happens, it can be rather stressful, especially if your geckos become injured.

If geckos have begun to fight, you need to separate them. Geckos are often fine together, until they are not, so if your crested geckos become aggressive, it is best to remove the aggressor and place them into a separate enclosure.

For many people, unfortunately, once fighting begins, it will continue because a dominant gecko complex has been developed. Removing the aggressor is the safest way to ensure that your geckos are safe.

How Do I Introduce New Crested Geckos?

If you are purchasing a new crested gecko to attempt to introduce to your other geckos in their enclosure, you should have a backup plan ready from before you ever make the purchase to ensure that if the cohabitation fails, your geckos are safe and the aggressor has a place to stay. This should be easy, considering you need a quarantine tank to help ensure the new gecko is healthy and will not pass any illnesses or parasites to your existing gecko population.

If things do not work out, turn this quarantine enclosure into a permanent one or have an alternative enclosure pre-purchased and ready to go.

New crested geckos need to be quarantined for a few weeks to ensure they are not carrying anything that could potentially harm your existing gecko population. Generally, it is recommended to quarantine them for sixty full days to ensure there is nothing concerning happening with their health.

Once they have passed this period, you can begin introducing them to your other geckos.

Monitor their behavior closely and try to not leave them alone fully. Some crested geckos have personalities that will mesh well and some simply do not.

These are smart little animals with their own individual behavioral patterns so sometimes they just clash. This is normal and why you have the backup plan at the ready.

If they get along well, after a few days you can begin to supervise less often and let them settle in. However, if you notice any signs of concerning behavior or distress, it is a good idea to preemptively remove the new gecko so no one gets hurt.

Also, be sure the geckos are the same size to ensure no one becomes a meal, as previously mentioned.

Crested geckos can often do well in small communities, but sometimes it is just not meant to be. Keep an eye on your pets and always watch for signs that they are not getting along well; if you notice something alarming, act quickly to prevent injuries and you should be just fine.

In most cases, everything will likely work out well and your geckos will cohabitation well! Just pay close attention to your enclosure and you will be okay.

Why Does My Leopard Gecko Have Black Spots on its Belly?

Why Is My Leopard Gecko So Skinny? How To Fatten It Up?

Can Geckos Swim? What To Beware Of

Do Geckos Need a Water Dish?