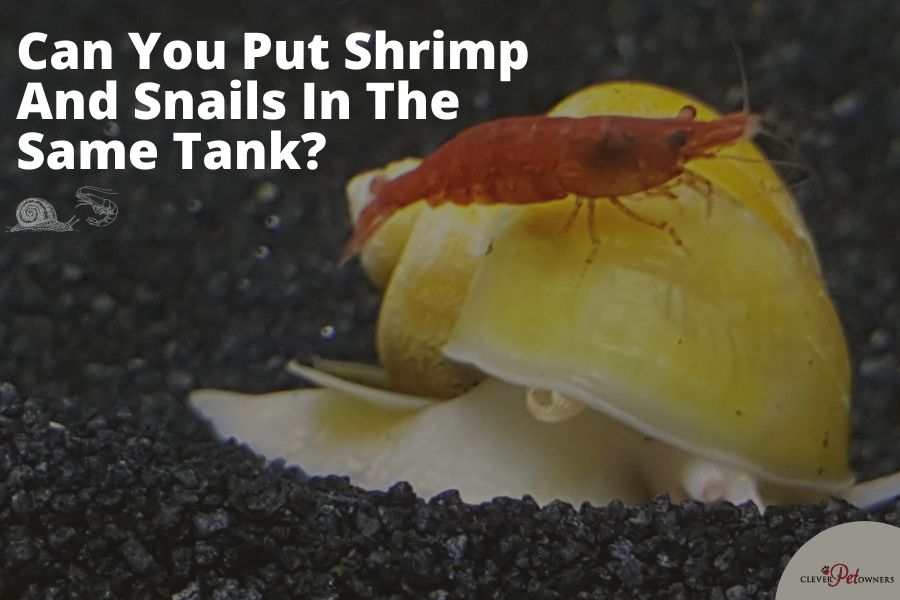 Shrimp and snails are both common animals that are kept as aquarium pets. But have you ever wondered if you can keep these animals together in the same tank?

Luckily, in most cases, keeping shrimp and snails in the same tank is perfectly healthy, and can even be beneficial in unexpected ways.

Read on to learn more about how shrimp and snails behave together, the benefits of letting these animals cohabitate, and the potential concerns you may have about keeping them in the same tank.

Do shrimp and snails behave well together?

Keeping shrimp and snails together in the same tank is not only safe, but is also highly recommended.

Occasionally, shrimp may pick on snails, but this is usually never to a harmful extent.

Because these animals are actually very mutually beneficial to each other, allowing them to cohabitate can also produce a variety of useful effects on your tank ecosystem.

Shrimp are typically peaceful, docile creatures. They do not tend to move around the tank very rapidly unless they are in the breeding process, and are very curious animals overall.

Shrimp like to explore and scavenge for food. For this reason, they enjoy living in aquariums with natural plants and plenty of other hiding spaces.

Although they are not incredibly active except during the breeding period, you will likely notice your shrimp being especially inactive when they undergo molting.

This is because the molting process consumes a lot of energy, and the shrimp will need to rest in order to develop a healthy new shell.

Snails are similar to shrimp in that they are very adventurous. Some snails may even venture towards the top of your tank, appearing to be seeking an escape.

This is not actually because these snails have a death wish, but rather it is simply because they are curious and like to explore.

Snails are very slow-moving in comparison to shrimp. They also highly enjoy living in tanks with live plants because most snails consume decaying plant debris.

In the right environment, with a large amount of food available and an absence of predators, snails are known to breed abundantly.

This varies widely depending on the variety of snail, but some species reproduce so rapidly that they are commonly known as pest snails.

Snails are remarkably efficient at cleaning up debris from your tank. They remove dead plant matter and work well to clean algae off of the glass.

If you have several small varieties of snails in your tank, your snails can even act as an efficient gravel vacuum.

Snails also digest other animal waste, such as shrimp droppings, which helps with decomposition and minimizes the amount of waste present overall.

Because high amounts of shrimp waste can develop toxic ammonia, having snails around as a clean-up crew is highly valuable.

Although shrimp would never intentionally harm a healthy, living snail unless they were otherwise starving and had no food available, they may control your snail population in other ways.

This is because shrimp are often able to locate nests of snail eggs, and typically feast on these bunches as a fresh, highly nutritious snack.

This will not prevent your snails from reproducing entirely, but it can prevent them from overproducing in an undesirable way.

Both shrimp and snails highly enjoy living in planted aquariums.

Not only does decomposing plant matter act as a food source for both types of animals, but the plants also provide numerous benefits to the water quality, such as fresh oxygen and a natural filtration process.

Additionally, shrimp and snail detritus or waste are great fertilizers for tank plants. Waste from these animals is naturally high in the same nutrients that are present in most store-bought fertilizers.

Since these animals only eat plants that are already dying, they make a perfect clean-up crew for removing the occasional yellowed Amazon Sword leaf or wilted floating plants.

As we hinted earlier, shrimp do not eat living snails unless they are genuinely starving.

However, they may occasionally eat dead or dying snails and munch on the shells they leave behind.

While some tank owners find this process disturbing, it is a natural part of the animals’ life cycles and helps to keep your tank tidy and clean.

Shrimp will only attack or try to eat living snails if they cannot find other food sources.

Because shrimp are scavengers, meaning they typically feast on dead things, their claws and mouths are not suited for killing other creatures, even fragile ones such as snails.

Shrimp that appear to be picking on living snails are typically only eating small amounts of slime coating of the snail.

Fortunately, this is only a minor nuisance to the snails because they can repair small patches of this slime layer within a day or two.

As shrimp and snails are both scavengers, they tend to have a similar diet. Both types of animals typically consume decaying plant matter and sinking food, and may also occasionally enjoy dining on vegetable cuttings such as boiled zucchini.

Because they consume the same types and sources of food from the tank and both require high amounts of protein and calcium, it is crucial to ensure that you put enough food in your tank for shrimp and snails.

Even though snails move more slowly, they can often consume more food at once, and may also wrap themselves around their food, concealing it from other tank inhabitants.

Always ensure that shrimp eat enough before allowing snails to clean up the leftovers.

Among smaller species of snail, ramshorn snails, which are sometimes considered a pest snail, are a very common species to keep in shrimp tanks.

Although these snails breed more rapidly than other varieties, they are highly efficient cleaners, and most grow in size to be around a half-inch in diameter.

Nerite snails, which grow to a maximum of about one inch, are another popular option for shrimp aquariums.

These snails are also efficient cleaners, and are especially known by many aquarium keepers to be the best species for removing algae from the glass walls of your tank.

Next is Malaysian trumpet snails, often abbreviated MTS in aquarium-keeping forums. These are also a great option for shrimp tanks that can get up to one inch in length.

The unique cleaning ability of this snail variety is that they are known to burrow into the gravel when they sleep. This provides a deeper clean than can be achieved with other species.

If you are using a substrate for your tank that has finer particles than a small gravel, this cleaning effect may not be applicable.

Malaysian trumpet snails typically do not burrow in dirt or sand, and may also have issues with abnormally large gravel.

Colombian snails, also known as giant ramshorn snails due to their similar shell appearance, make a great addition to your shrimp tank.

These snails can grow up to two inches in diameter, and are loved among tank keepers for their interesting shell designs.

Apple snails, sometimes called mystery snails, are another common variety of snail that can grow up to four inches in length.

Unlike other varieties of snail we have mentioned so far, this species of snail will eat certain types of living plants, making it a less sought-after option in naturally planted tanks.

Rabbit snails, which grow to a maximum length of five inches, are somewhat similar to apple snails in their appearance.

Available in a variety of decorative and interesting colors, these snails are our top choice for tank keepers eager to enjoy a noticeably larger species of snail.

It’s important to note that many large varieties of snails have special care instructions, so you should always thoroughly research the species of snail you are interested in purchasing before committing.

Species of Snail to Avoid

Some types of snails are not recommended to be kept in shrimp tanks.

The first of these types is known as an assassin snail, a name that refers to its behavior of commonly eating other snails.

Although some aquarists choose to keep these snails in shrimp tanks anyway, they can eat shrimp without difficulty, so we recommend avoiding them.

Bladder snails or pond snails are other varieties of snail that are not recommended. These snails reproduce rapidly, at similar speeds as ramshorn snails, but tend to produce much more waste in your tank.

We do not recommend these snail varieties because they can lead to an unsanitary tank appearance.