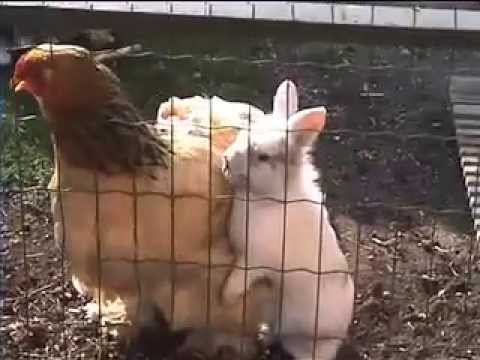 Rabbits could be some of the cuddliest creatures of the great outdoors, despite this they could also have their mean streaks and possessive tendencies. That’s why it’s great to do some research and scan the animals that they could share their territory with, anything less could have an unsavory outcome.

As far as animals are concerned, some fate is better with each other than the rest. Here we would be checking out the relationship or lack of it between rabbits and your neighborhood chickens.

So can you put chickens and rabbits together?

Yes, and No! Yes, because rabbits are usually quite tolerant and chickens aren’t that harmful themselves. The first thing you need to do is to ensure that both animals grow up together, that’s the easiest way to bond.

Also, you need to ensure that neither feels threatened by the other’s presence. More on that later.

No, because let’s face it, they are two remarkably different creatures and we aren’t talking about science here. In this case, unlike poles aren’t likely to attract.

There are times that the best thing you could do for your bunny and chicken is to keep them as far away from each other as possible. Also, more on that later.

How To Bond Rabbits And Chickens?

Like I always say, if anything is worth doing, it’s worth well. As long as you choose to tow the path of harboring both rabbits and chickens together, you should do it right.

There are a lot of conflicting opinions on how to achieve this, but here I’m going to give you the hard truths in the most accurate way possible. Just to show you it’s not that much of a deal.

Tip 1 – Pair Them Up While They’re Young

Young bunnies are just like toddler human beings, they are seriously impressionable and they can be groomed to be whatever you desire at this point. The same goes for the young chicks in the harbor.

That’s why this is the best time to pair them up and see just how well they’re getting along. It would be pure tomfoolery and almost bordering on animal cruelty to introduce a grown chicken and an equally matured rabbit in the same pen.

This will most likely lead to a casualty and I can’t assure you that it’s your bunny that would be the surviving party. 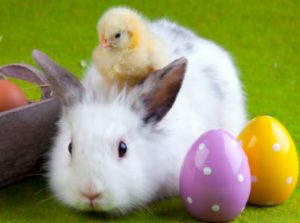 The cleaner an environment, the happier the bunny and chicken. If you keep their terrain clean there’s a higher chance of them tolerating or even loving each other’s company.

Ensure that you clean the place not once a week, but anytime it looks not so habitable. We’ve heard of cases of rabbits being quite confrontational when in dirty environments, so we don’t want that to be your lot.

Chickens might be able to bear with a not so clean terrain for a while longer, but it’s not a bright idea to put them to test.

Interesting READ  Why Is My Rabbit Not Drinking Water?

Keeping it at a minimum applies in two differing but quite similar scenarios. First, you need to ensure that it’s just one bunny and just one chicken for starters.

Secondly, you need to ensure that even while together, there’s a medium for them to have their all so important measure of privacy. For the second, you can do this by building small hutches inside the place, that way they could have some much-needed space if need be.

As for the first scenario, it all has to do with your discipline as a bunny owner. Resist the urge to populate the place with more bunnies and you’ll be just fine. The same goes for chickens.

What Are The Advantages Of Chickens And Rabbits Living Together?

While it has been accepted that rabbits and chickens can live together, it would be highly beneficial to bunny owners to see the pros of having their bunnies blessed with neighbors like chickens. Here are a few and we hope that they would be helpful.

If there are any sets of animals that love the company, it has to be the friendly and cuddly bunny. These animals simply love having a friend around and it’s quite understandable.

It helps because chickens eat the same stuff that they do and they are really easy to maintain. As far as you start this process quite early, preferably in their infancy then you’re going to be just fine.

In rabbits, you have one of the most prey worthy types of animals known to mankind, while chickens come in a close second. Animals that are such lovely prey for predators need strength in numbers, that’s why having rabbits and chickens living together isn’t just a bright idea but a masterstroke.

While chickens are alpha prey, they do have a nasty streak. They could combat some of the deadliest predators when given the need to, especially when they have a friend to protect.

Step in, the rabbit. Once the chicken and rabbit develop a bond over time, the chicken would become fiercely protective of his furry buddy and this would do wonders for each of their long term survival hopes.

Now that we are done with the major advantages, let’s get right to the typical advantage of the common man. The fact that keeping both a rabbit and chicken is incredibly space-saving.

Trust me, if people could keep dogs and cats together they would, especially to save space. Now they can conveniently keep two awesome pets together if they play their cards right and you think they’ll let it slide?

I think not. Keeping bunnies and chickens together can be a masterstroke for space-saving, this because you’ll not need to burden yourself with getting a large expanse of land and other costly stuff. It’s that convenient.

Interesting READ  Why Is My Rabbit Bobbing Its Head Up And Down?

What Are The Disadvantages Of Rabbits And Chickens Living Together?

As they say, for every plus there’s probably a minus. In this situation, we have a few which would be necessary for you to get abreast of before you go into the business of housing your bunnies and chickens, look closely at ladies and dudes because you never can tell.

While rabbits are cuddly and largely tolerant, chickens could be a little volatile and occasionally standoffish. There’s also a little something to consider, chickens are very terrified of fast-moving animals, and rabbits are just to put it lightly not the slowest of the bunch.

This conflict in temperaments could spill over at any time and it would be a sure shame to come back home from a hard day at work and meet your chicken jawing at your furry bunny. This is significantly worse if your rabbit hadn’t been nurtured, it would breed an environment of significant toxicity and guarantee you a very high chance of acrimony.

A male rabbit on heat is the worst thing to have around any seemingly domineering animal, talk more about a chicken that’s just minding its own business. Neutering can help but that too would still leave the rabbit craving for a mate.

It would be rather awkward to find your male bunny making incessant passes at your noble chicken that’s simply minding its own business. Worse still, if the rabbit does this when the chicken isn’t in the mood for such shenanigans, it could lead to a horrible fight that might need sorting, or worse. 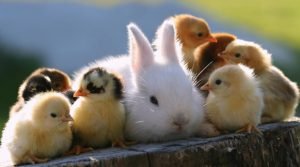 While as an owner, you are advised to keep your habitats clean at all times. The same cannot be said about the animals that you’re trying so hard to keep in a clean environment to ensure that feathers aren’t ruffled.

Rabbits are super clean and very organized in how they handle their business, but chickens on the other hand could be quite a handful (literally). That’s why it would be smart to have them apart once you notice that the disparity in cleanliness is too wide.

There’s nothing worse than having a roommate that always has his stuff in disarray and poop on the floor. Trust me, that’s what the rabbit keeps thinking about when his roommate is messing up the whole terrain.

The reason for making a list and scale of preference is to give an owner the perfect opportunity to make the best decision. Rabbits are hospitable, neat, and easy to be around.

Chickens are fun, plucky but not so clean if we’re being fully honest. There are pros and cons to having them stay together, so that’s why if you decide to tow this part, you should do it properly.

There are ways of making their cohabitation a breeze and there are also ways of making it a living hell for you the owner. The path you decide to follow is ultimately yours, but we are sure that if you stick to our principles and do some extra research, you’d be just fine.