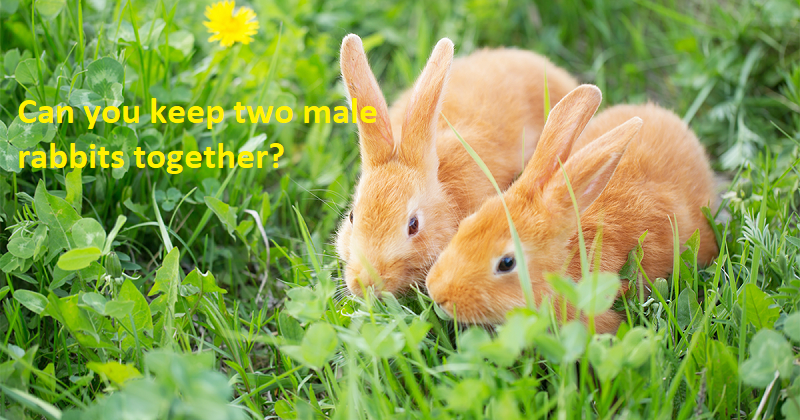 Rabbits are some of the smartest and most social animals making for great pets and awesome companions. They are super friendly when unthreatened and as such won’t mind having a friend.

I thought long and hard about this and felt it would be a great service to the rabbit loving community to write about the possibility of keeping two male rabbits in the same space. It came following a frequent pattern of questioning and I felt it’s about time to put an end to all the confusion that has arisen over time.

So really, can you keep two male rabbits together?

It is possible to keep two male rabbits together but this should be done in a controlled manner. Rabbits might be super friendly, cuddly, and incredibly cute but don’t forget that they remain animals and animals have that competitive spirit about them.

As a result, it would be advisable to groom such rabbits together while they’re still young and avoid introducing them to each other midstream to avoid a clash of bunnies.

In this piece, I’ll show you exactly what I mean.

Under What Circumstances Can You Keep Two Male Rabbits Together?

While rabbits remain some of the cuddliest animals that nature provides, care must be taken to ensure you don’t get on their wrong sides. Do not forget that they’re still animals and as such could have a nasty streak if care is not taken.

There are a couple of situations that are ideal for two male rabbits to coexist in the same vicinity while there are some scenarios that would make such a coexistence frankly impossible. Allow me to give you a rundown.

Scenario 1: They Must Be Neutered

Neutered rabbits are calmer and have a better chance of having a proper coexistence than their unneutered counterparts. For two male rabbits to live together they should be neutered, if they aren’t there is a huge possibility that one night they’ll have a massive fight and the next morning you’ll be having a bunny funeral to preside over.

Also in a scenario where you want two male rabbits to live together at least one of them has to be submissive as that’s the only way their egos won’t clash at some point.

Scenario 2: They Come From The Same Litter

Rabbits are more loyal than your average domesticated pet and that loyalty stems from a clear understanding of what family truly means. However, ensure they are neutered to prevent hormones from damaging their relationship.

Make sure that you never keep two unneutered male rabbits together, even if they’re brothers. They will fight and that might result in a nasty injury or possibly death.

Why Should You Not Keep 2 Unneutered Male Bunnies Together?

Rabbits that aren’t neutered are highly volatile and dangerous whether they be male or female, whether they be from the same litter or not. As a result, rabbit owners should ensure that they neuter their rabbits as soon as possible, this will give them a better chance at peaceful living in the short term and long run.

How To Introduce Two Male Rabbits To Each Other

Luckily for you, male rabbits are not as volatile compared to a bunch of other male species of domesticated animals. All you need to do is follow a few steps, avoid skipping any and you’re good to go.

Usually, you’ll have one male rabbit resident in its cage, so all you need to do is either build a new cage or set up a temporary one beside it. Once you do that, proceed to get the other male rabbit into the newly acquired cage not too far away from the resident male.

This is important so that both rabbits can see each other in not so distant proximity before they will be freed and given the chance to bond properly. Rabbits are clean creatures and as such it’s super important that their cages are properly equipped as this will reduce the chances of them getting confrontational and agitated.

A proper male rabbit cage should have a newspaper that is topped with straw, hay for consumption, a food bowl for fruits and veggies, a water dish, and a sheltered area that it can hide in. There should also be a litter box where your pet bunny can do its business with a level of discreteness.

Ensure this is done for a while and even when you have to let them out for exercise this should be done separately.

This is one of the most important steps that got to be taken by serious rabbit owners. This is the only way to correct incorrect sexing.

Also, if this is done as soon as possible the sex hormones that are responsible for aggression and territorial behavior will be removed and your male rabbits will get along better. After neutering is complete then you can wait for two months before proceeding to the next step.

You might be wondering why I should wait for a whole two months but there’s an important reason why. The longer you wait after neutering, the better for your bunnies as neutering leaves wounds that need healing.

Moreover, there’s a high chance that both rabbits will fight once they get together for the first time, so they should be fully healed. 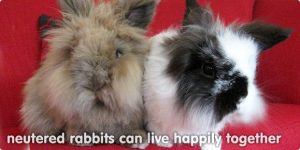 Step 3: Place The Cages Together

This might look like the simplest part but trust me if this step isn’t taken with absolute finesse and precision all your good work at the initial stages would go to waste. The first meeting should be through the bars of their cages. Carefully place the two cages or pens side by side and lay keen observance on how they handle the new ‘guest’.

Make sure that they can see each other clearly through the wire, keeping guard that the two cages are far enough to ensure that they can’t touch. This is a vital part of the bonding process as their curiosities would be further heightened.

You might even notice that they might sometimes sleep with their eyes open, just to keep a lookout on each other.

Interesting READ  Why Does My Rabbit Keep Flopping Excessively?

They’ll most likely try to touch, vocalize, sniff, and possibly set each other free (talk about brotherly love). As soon as they have gotten used to each other through the bars, you’ll be pretty sure.

They’ll be more at ease rather than being perpetually on the defensive. You might even see them laying out and trying to share bunny secrets once they feel you aren’t looking.

As soon as you notice this then it’s probably time for the next step.

Step 4: Time For A Face To Face

Now, this is super delicate and for the duration of this step, you must ensure that they are properly supervised. First off, you introduce them to each other in a neutral room that neither has spent any time in.

The reason is that neither of the rabbits must assert his territory in the room, that way there will be a level playing ground. After this, it would be smart to introduce a juicy treat to the rabbits, that way both of them could bond and feast at the same time, trust me it’s an awesome way to make a new friend.

After the meal, it’s now time to place both of them inside the room, make sure you are on high alert as they would possibly get in a little scuffle to assert dominance so it’ll be a wise idea to equip yourself with proper gloves. If they survive this stage, then it’ll be time to move on to the next step.

However, if you notice that the rabbits keep jawing at each other, circling each other, or maybe aggressively trying to assert dominance it’ll be smart to gradually ease them in till they’re ready to peacefully coexist.

Mind you, you’re trying to bond two male rabbits so it’s certainly going to be a different ball game when compared to the opposite sex. Male rabbits are inherently dominant and territorial so you might have to bid your time on this.

Ensure that each day you make a little progress before putting them in their separate cages. With time you’ll see that they’ll get closer and closer.

Till they lie down touching each other, now that’s bonding. The final stage of bonding is grooming each other. This is a sure indicator that they will become best friends for life.

As soon as you’re sure that they’ve been grooming each other for a few days, it’s perfectly normal to let them live together permanently.

It’s very possible to keep two male rabbits together but adequate preparations and precautions must be observed. Those cute creatures you see could be territorial and dominant so if you don’t want a casualty you should do things the right way. It’s extremely necessary to properly neuter the rabbits and domesticate them accordingly. It’s also easier for rabbits of the same litter to bond rather than outsiders so keep that in mind. As long as you calmly follow the above steps (skip any at your detriment), treat the bunnies right, and exhibit consistency. There’s absolutely no reason why two male rabbits cannot safely coexist.

When To Separate Male and Female Rabbits?

Is Mulch Safe For Rabbits?

How To Keep A Single Rabbit Happy?

When Can Baby Rabbits Leave Their Mother?