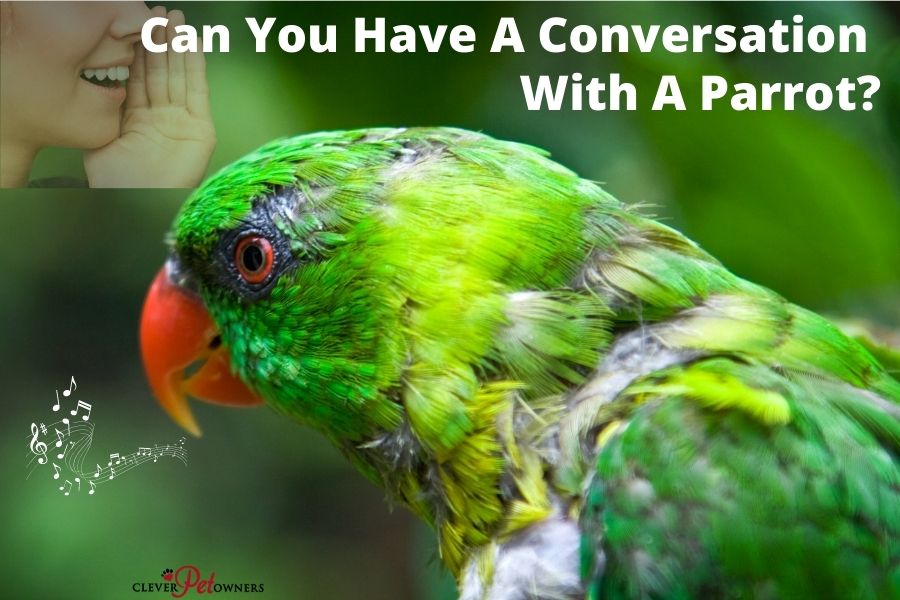 A fascinating thing about parrots is that, unlike other birds, they can speak and learn some human vocabulary. Does that mean they can hold an actual conversation with us? Well, not in the way you think.

They are capable of speech but know that just because one parrot can speak doesn’t mean all of them will. It could be something as simple as the bird’s age or personality.

Either way, there are ways you can encourage and teach your bird to be able to speak. Doing this increases the chances of you and your parrot having a heart-to-heart.

Contents
I) Is it possible to have a conversation with a parrot?
II) Can all parrots learn to speak?
III) How to teach a bird to talk
IV) When can parrots begin to speak
V) Conclusion

Is it possible to have a conversation with a parrot?

It is common knowledge that parrots can speak. They hear what is said around them and notice the words humans say.

I am sure some people have wondered (including myself) if parrots can have an actual conversation where they understand what is being said.

Unfortunately, the answer is mostly no. What you are hearing is actually mimicry.

Speaking to a parrot or vice versa is different from two people or animals talking to one another.

You are not really having a meaningful conversation where everyone understands what is going on. The parrot is listening to what is being said and repeating those words.

Can they understand what they are saying? According to one study, they can but remember that only one study claimed this.

However, do not let this deter you from speaking to your bird because simply talking with them is an amazing thing and, depending on what they say, amusing as well.

When you and your parrot are ‘speaking’, what is happening is the parrot is repeating what it is hearing. While this may be anti-climactic, think about how amazing it is that a bird can do this in the first place!

They have a unique way of speaking yet can repeat our words in a way that we can understand. It’s like how a person can sing in another language by repeating the lyrics but not understand the actual lyrics.

There was one case of an African Gray Parrot named Alex who seemed like he could understand what was being said to him. If you asked him to count the object in front of him, he could and would give a number.

Because of Alex the Gray Parrot, I suppose they may answer some questions if the parrot is above average intelligence, but it will never truly be an actual conversation.

Can all parrots learn to speak?

We have established that parrots can technically be able to speak. However, does that mean all parrots can mimic human speech? The answer is complex.

While most parrots can speak, some factors, such as age, gender, species, or even personality, could play a part in whether a parrot does speak.

Interesting READ  Should I Cover My Bird’s Cage At Night?

Most parrots are capable of speech.

The answer is that most parrots are capable of speech. While several factors might influence how often a parrot will speak (or if they will at all), the chances of your parrot speaking are high.

While there are trainings available to get them to speak more, sometimes simply talking around them can influence your pet parrot to pick up some words.

So, if you’ve always wanted a parrot and worry that you’ll end up with one that will not talk, please do not fret.

Chances are they will at least say a few words, but if they don’t, it doesn’t matter because, in the end, pets are there to enrich our lives which is why we adopt them in the first place.

There are exceptions with everything, including how often a parrot will speak. One reason a parrot might be less expressive as opposed to a vocal one is gender (in some species, at least).

Males are more vocal because of courtship behaviors, so this plays a big part. Another reason is age because birds must be a few months old before they can even speak (which we’ll get into later).

Finally, one interesting reason is personality. It should make sense because everyone has a unique personality, and animals are different.

Some parrots might be more extroverted, while others are on the more introverted side. You may even have a parrot who has no interest in learning to mimic human speech or learn more than just a few words.

How to teach a bird to talk

While a parrot might pick up a few words or phrases when they hear you speak, to truly get them to speak frequently, you must teach them.

Now please don’t run off at the sound of having to train your pet parrot.

I know training an animal can be daunting but look on the bright side: at least you do not have to train a cat! Training a cat is near impossible. Trust me, as someone who also owns cats, I know.

Teaching your parrot is doable, and it is going to take time. However, the result will be the joy of hearing your parrot speak. Two ways to do this are repetition and making sure there are no distractions.

The best way to teach your parrot to speak is by simply repeating the word. Do it as much as you can because this is the best way for a parrot to truly learn.

If you don’t always have the time or patience to keep repeating the word, you can try using videos, CDs, or something that could record your voice and let you play it for your parrot.

However, be warned that you want to be careful what word it is that you repeat around your parrot.

If you tend to swear and your parrot constantly hears you saying one of those less than savory words, then expect it to be repeated.

Interesting READ  How To Take Your Bird Outside

The worst thing about trying to learn something is the number of distractions that can pop up when attempting to learn. This can affect you if you are a grown human being.

Imagine being an animal, though. If you are trying to teach your parrot in a room where there are other people, noises, or anything that can be a distraction, then you aren’t going to be successful no matter how hard you try to teach them.

Please don’t worry, though, because there is a way you can make sure your bird will learn, and it’s simple.

The best way to do this is to go to a quiet room with no distractions. Once you can do that, begin teaching your bird one word or phrase at a time.

It won’t happen overnight, but it’ll be easier to do it in a quiet place than somewhere with a lot of noise and other distractions.

When can parrots begin to speak

Okay, so you have some idea of how to teach your parrot to speak, but when can you start doing it?

There is a suitable time to teach your parrot and an inconvenient time as well.

The younger your parrot is, the easier it is to teach them, but you also don’t want to teach them too young otherwise, they won’t be able to fully comprehend it.

It’s always easier to learn something when you are young. Children usually have an easier time learning languages when they are young; the same applies to parrots.

The best age for a parrot to learn depends on the species, but usually, it’s between three months and a year. If you are unsure, just do some research about your parrot.

There is a thing as too young.

While you want to start teaching a parrot early, you also want to ensure they are not too young. A parrot that hasn’t grown up enough has no way to learn to mimic human speech.

The best way to figure out if your parrot is too young is to simply do some research or ask a vet. Sometimes asking a professional is the best way to go.

And so that answers whether you can have a conversation with your parrot.

It’s not a traditional conversation in the way you would have with a person, but by taking the time to teach your bird, the two of you can bond and communicate.

It’s always amusing and heartwarming to walk into a room and hear your parrot say: how are you? Or even something less polite should you tend to use the forbidden words.

Remember, though, that not every parrot will eventually learn to speak either right away or at all.

Some may be too young, or the parrot may not want to talk. Either way, I know you won’t love them any less.

Pros And Cons Of Owning A Budgie

Can Birds Die From Overeating?