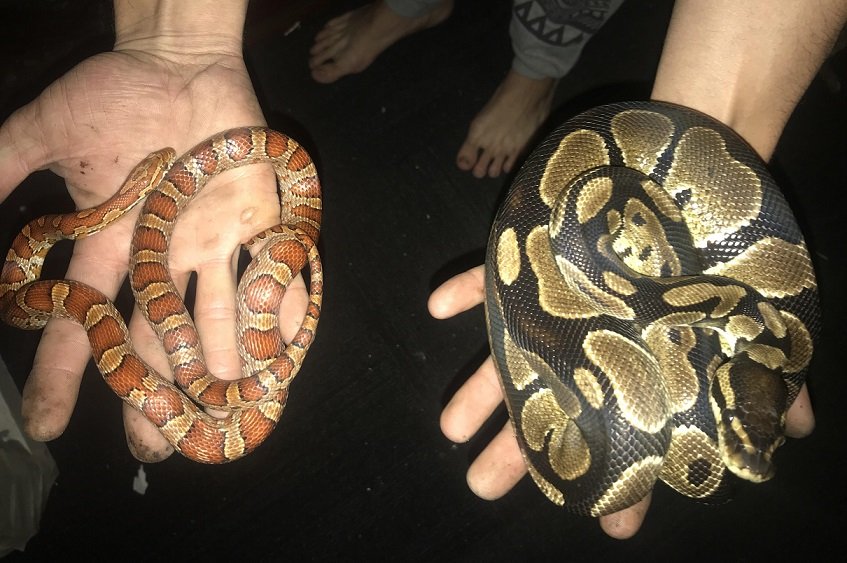 In the snake world, many people champion the multitude of different shades and patterns that can be bred into both corn snakes and ball pythons. From deep intense coloring or striking lines and blotches to pastel shades of purple, white, and pale yellow, both breeds are capable of enough variety that they seem to be different snakes.  Even though these snakes are both loved by the snake community and easy to come by, they are fundamentally different and unable to be crossbred.

In order to understand crossbreeding, a brief understanding of where snakes fit into the animal kingdom. Snakes is a general term for a huge variety of creatures belonging to the same scientific suborder Serpenta; this includes everything from venomous sea snakes to little ring-necks, anacondas to pit vipers, asps to ball pythons. Think of a giant tree.  The trunk is the suborder Serpenta, then the trunk divides into more than 20 different branches, or families. Each of these families further divides into smaller branches, called genus.  The genus divides even further into different species (Uetz 2020).

So what does this matter?  Even though snakes may look similar, their internal body structures, methods of hunting, needs, behaviors, and nearly everything about them can be vastly different from a snake in a different family. For example, an Eastern garter snake (scientific name: Thamnophis sirtalis sirtalis) is part of a family of snakes that bear live young and are harmless to humans.

An Eastern copperhead (scientific name: Agkistrodon contortrix) lays eggs and is venomous and dangerous to humans. Yet, these snakes can both be found in Virginia (Mitchell 2017).  Returning to the tree analogy, the further down the tree branch, the more different the snakes are.  Only snakes that are very close, like from the same species, have a chance of cross breeding.

Are there any snake hybrids?

A snake hybrid is the offspring of two different types of snakes. It is possible with snakes that are closely related but still different to cross breed and create a hybrid, a blend.  One such example is a hybrid between a fox snake and a bull snake.  This hybrid has been DNA tested and confirmed.  A hybrid crossbred from fox snake (Pantherophis vulpinus) and bullsnake (Pituophis catenifer) has been found and confirmed through DNA several times in the wild (Van Valen 2017).

Although hybrids infrequently occur in the wild, they are more common among breeders. There are several snake breeding programs that have successfully produced hybrids between close snake species. The New England Reptile Distributors is one such example.  They have successfully bred a hybrid between a Burmese python (Python bivittatus) and a reticulated python (Malayopython reticulatus).

These two snakes are both in the python family, but are distinct from each other; however, the hybrid has been able to produce offspring, proving a true cross (New England Reptiles).  Snake breeders take great risk when attempting cross breeding.  Mariah Healey, a reptile husbandry specialist and consultant, explained these risks.

“When breeders mix two pools of very different DNA, the results can be infertile, riddled with birth defects, or worse: stillborn. And even if the offspring turn out healthy, disposition and care requirements require a good bit of guesswork. Furthermore, hybrids that get bred to purebloods can destroy valuable bloodlines” (Healy 2016).

Can a ball python and a corn snake mate?

In order to address the ball python/corn snake hybrid possibility, the tree analogy must be revisited.  Corn snakes are in the colubrid family, Colubridae. Their genus, or smaller branch, is Pantherophis.  Pantherophis is a grouping made up of rat snakes, fox snakes, and corn snakes. Their species, an even smaller group within the genus Pantherophis, is Pantherophis guttatus (Myers et. al 2020).

Ball pythons are in the Pythonidae family. This large family is subdivided into many genera (plural of genus), including tree pythons (Morelia), water pythons (Liasis), shield pythons (Aspidites), and pythons (Python), among many others.  Python divides even further into ten different species of python.  A ball python, or royal python, is one of these species (Myers et. al 2020).

In comparing these two snakes, they are significantly different from each other, not only because they are from different species or genera, but because they are from completely different families.  It would be the same as comparing a death adder (family Hydrophiidae) and a chameleon (family Chamaeleo) and attempting to create a hybrid between the two (Myers et. al 2020).  A ball python X corn snake hybrid is simply a genetic impossibility.

Can ball pythons breed with other snakes?

Why create a ball python hybrid?

There are several reasons breeders might want to hybridize a ball python. Because ball pythons are known for their agreeable natures, some breeders seek to mellow out a more aggressive species of python. Other breeders might be attempting to create new color and patterns by combining species with different morphs, or color/pattern mutations. Still others try to cross breed ball pythons simply to see if they can.

One of the current ball python hybrids that can be found in certain breeding programs is a cross between a ball python and a burmese python, called a Burmball. One breeder, Bob Clark Reptiles, has several viable snakes available to the public, although they may be out of some buyers prices range, coming in at a hefty $3,700. Because this hybrid is fairly new, there is not a known maximum or even average length.  A pure adult Burmese snake can grow to be 16 to 23 feet long whereas an adult python can grow to be 4 to 6 feet in length (“Burmese Python”).

Another ball python hybrid that has been around for quite a bit longer, since at least 2002, is the cross between a ball python and a blood python, called a superball python.  These hybrids get bigger than a pure ball python, but they have some of the same characteristics, like head shape, as the ball.

Other ball python hybrids include:

Brian Barczyk, of BHB Reptiles, explains the risks of hybridization on an episode of his youtube channel, SnakebytesTV.

He goes on to say that one reason some breeders don’t like hybrids is that they can look very similar to the pure parents, but end up muddling up the genetic pools in breeding programs (BHB Reptiles 2011).

Can corn snakes breed with other snakes?

Corn snakes are able to breed with a select number of other snakes, and unlike ball pythons, they have had success cross breeding with snakes from other genera and species. One such hybrid is a California kingsnake crossed with a corn snake, resulting in a Jungle Corn snake.

However, to breed such a snake, it takes a little bit of trickery on the part of the breeder. Southern California Kingsnakes describes their process. “First you want to put the two snakes of the same species together and let the male try to copulate with the female of the same species. Once he is getting close to making it happen, I put the female kingsnake in the same enclosure and attempt to place the male snake onto the back of the female kingsnake.”

There are a variety of corn snake hybrids.  Some are crossed with species of other genera, like a California kingsnake or milksnake.  Other, more common crosses, are within the pantherophis genera.  Because these snakes are more closely related, they are easier to create hybrid with.

These include many varieties:

Hybrid snakes are rapidly growing in popularity among breeders and yet, for some, they present ethical issues.  Like the line in Jurassic Park, many breeders think it is more a question of snakes should be crossbred, rather than a question of if they can be. Whatever your stance on hybridization, hybrid snakes are here to stay and maybe an Angryball or a Jungle corn snake will wiggle its way into your heart soon.