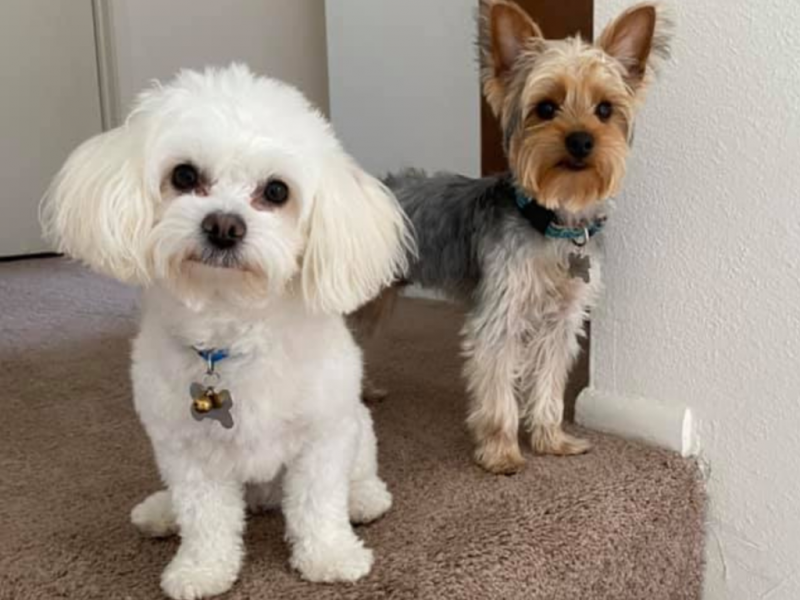 Yorkies and Maltese are both extremely small and high energy dog breeds belonging to the Toy Group. Perfect for apartments, older owners or just someone looking for a smaller dog.

These two breeds have temperaments that pair perfectly well with each other. Yorkies and Maltese tend to get along well and exhibit behaviors of playfulness with one another.

Many small dog owners own one of each and report these breeds are the best of friends. If you’re looking for two small breeds that work great as companions, a yorkie and Maltese are definitely a great option.

Both live until about 11-16 and are quite similar to take care of in regard to basic needs. There is even such a thing as morkies, which is a cross between yorkies and maltese.

Want to know more about the relationship between owning these two breeds and how to care for them together in the home to ensure they have the best of friendship? Check out below!

How Is It Like to Have a Yorkie and Maltese in The Home Together?

Yorkies and Maltese are similar breeds and can often live well with each other in the home. Despite their overlapping similarities in pet care, they are still their own individual breed, and each deserve some credit.

The yorkie or more formally known as the Yorkshire Terrier originally comes from Britain. They are usually a black, brown or dark gold coats with straight, long hair.

Maltese on the other hand come from the Island of Malta, near Spain. They have a bit curlier of hair although it is still long and similar to a yorkie if not groomed. They are also usually all white, which is a stark difference from dark colored yorkies.

Despite their general differences in appearance, they have personalities that bounce off of each other. Their small sizes help them to feel less threatened from one another. Both breeds are extremely loyal to their owners and also to each other once they have built a bond.

They also are both pretty high in spirit even into their old age. Sometimes it has been recommended to get a companion friend for when your dog gets older, and these breeds make a great pair to keep each other company!

Expect both of these breeds to be all over you because they are definitely both lap dogs. It is common for there to be a little tension sometimes between your yorkie and maltese when they are both trying to get the attention and love of their owner.

They tend to get jealous of each other sometimes so just make sure you give both attention evenly. Of course, every individual dog is different, and owners know their pets better than anyone. One of the most important pieces to ensuring your yorkie and maltese get along is by making sure they have a proper introduction.

Introducing My Yorkie and Maltese To Each other

Setting up a safe and proper introduction between your yorkie and maltese is always important before leaving them in the home together unsupervised. Especially if you already have one living in the home and plan to bring another in.

Sometimes bringing in a new dog can cause feelings of jealousy if your current has already established a sense of dominance over territory in the home. The good thing is that yorkies and Maltese tend to be pretty social and affectionate creatures.

So, they are usually quick to accept new dogs in their spaces. For one this gives them a chance to feel each other out and avoid any risks of fighting.

It is recommended to let your yorkie and maltese meet outside or in a more neutral territory before bringing them into the house. Then little by little try to play with the dogs together.

It may be smart to leave one on a leash and take them around the home to establish a sense of space, and then vice versa. Also making sure they each have their own beds and watering/food bowls will help establish their individual spaces and will help give them their own place where they process each other at first.

Training My Yorkie and Maltese Together

For owners who decide to get a yorkie and maltese together as puppies, these have their own pros and cons. The pro is that neither will have an established sense of dominance over your home already and so it may be easier for them to build a bond.

Since they will be growing up together too, this bond may be even closer and loving than introducing them when they are grown. Some owners report their dogs who grow up together often have stronger relationships than dogs that were simply brought as an addition to the home.

As mentioned above yorkies and maltese both generally tend to be high energy dog breeds. Despite this they are actually very smart. They may not be your local German shepherd, but many are known to learn tricks pretty easily!

And then work on training them together. As some may expect, they require a lot of exercise. Like a lot. These dogs should be walked at least once a day.

Once they are trained, they tend to do pretty well with each other on walks. While neither need a ton of space for exercise, this does make them perfect for apartments.

As a pet owner It is extremely important to give your dog play time but for owners who don’t have as much time having these breeds will ensure they always have a sidekick.

Do They Mark Their Territories?

Marking territory is a way dogs establish their dominance and visibility in a space. It’s like saying “Hey I am here, and this is mine too”.

To mark their territory, they will usually spray out a small amount of urine, but not entirely peeing in a distinct spot. Males tend to do this of both breeds more than females.

Some owners opt for 1 female and 1 male yorkie/maltese or 2 females of each breed to avoid this potential problem.  Both breeds are capable of marking their territory, but if they are each properly trained then it should be too much of a problem.

Yorkie males also tend to mark their territories more than Maltese. Malteses usually don’t mark too much if they are neutered.

Feeding Time for Yorkie and Maltese Together

Feeding time is a necessary part of responsible pet ownership and a time of day your dogs will really look forward to! When it’s time to feed your yorkie and Maltese together it’s important to give each dog their own separate food bowls.

Interesting READ  How To Transition Puppy From Litter Box To Outside?

Dogs are social creatures often choose to eat when their owner or another dog is eating. But this does not mean they don’t establish territory over their foods. Making sure to always keep things equal when giving your yorkie or Maltese a treat is the best way to help build their bond with each other.

It’s important to be mindful about what you feed your yorkies and Maltese as they both have very sensitive digestive systems. Both are known for being prone to digestion problems.

It is recommended to stay away from foods like garlic, onion, chocolate and grapes for most dogs. But especially in both of these toy breeds. Xylitol is another ingredient found in things such as peanut butter that should absolutely be avoided by your Yorkie and Maltese. Even the smallest amounts can be toxic to their small systems.

Will Yorkies and Maltese Fight Each Other?

While both of these breeds are generally peaceful dogs, it is possible for them to fight. This is usually caused by improper introductions to each other or lack of training.

It’s also important to be able to distinguish between playing and fighting. Sometimes dogs that are playing with each other may growl or bite as a way of expressing companionship.

It’s good to become familiar with what it looks like when these breeds are playing with each other versus when they are not. For example, if both dogs are wrestling around on the floor, growling at each other but still being friendly with you then they are probably playing.

If one dog looks visibly hurt or weak and the other dog is continuing to bite and growl where blood is drawn, then this is probably fighting. Fighting can often happen around feeding times and it is important to keep their food bowls separate from one another.

If your yorkie and maltese are extremely incompatible and continue to fight even when you establish dominance, there are many dog trainers and behavior specialists that are professionally trained to help with this.

My Yorkie and Maltese Get Along With Each Other, but Will They Get Along with Other Dogs?

Both breeds tend to get along with dogs relatively well. Sometimes these guys think they are smaller than they are, so they try to bark pretty loud.

One thing that may happen is your yorkie and maltese develop an extremely close bond is the formation of a “pack”. Which they will look to their owner as the leader of.

This may heighten how they react to other dogs if they are together, showing all the dominance they can to establish their place in the pack. With yorkie and maltese cases though it is usually all bark and no bite.

And usually only happens when you are entering their space or if they feel threatened by a large dog when they are with each other.  In general, though, both breeds’ temperaments are extremely social and friendly.

These small and cute dogs are the perfect addition to your home if you are looking for two breeds that work well with each other. With the right training and care they will keep each other company and become the best of friends!

Being mindful that every dog has their own personality, just like humans, is super important as a pet owner. No matter what kind of home you plan to bring your yorkie and maltese into, make sure it’s a loving one because these sure are two affectionate dog breeds.

Are Bandanas Good For Dogs? (7 benefits!)

How to Stop Your Dog from Barking at Night (3 simple ways!)