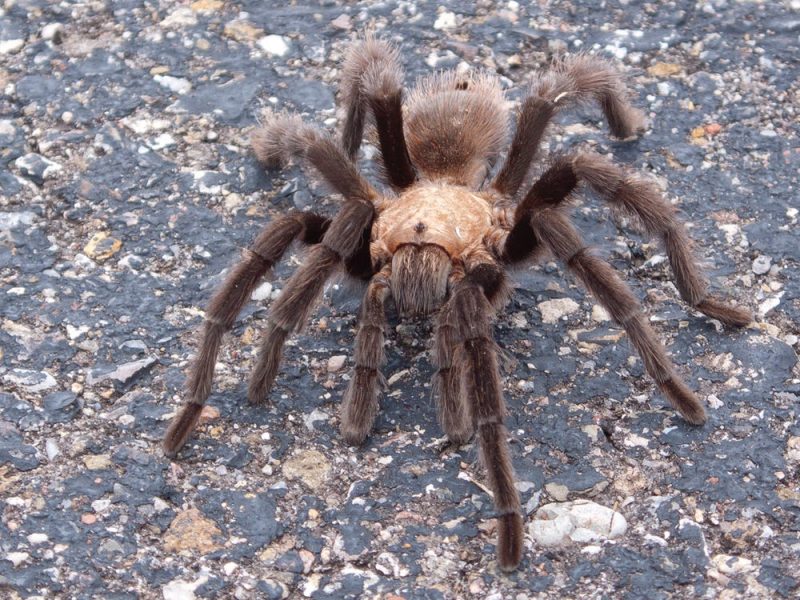 Most people think of tarantulas as solitary animals. Though you’ll rarely see them housed together, it’s not entirely impossible.

The majority of tarantulas cannot safely live together. Tarantulas are cannibalistic and will likely eat each other if housed together. However, with a small handful of species and specific care methods, there are a few exceptions to this rule.

Please keep reading to learn which tarantula species can be housed communally and how to prevent them from hurting each other.

The vast majority of tarantulas should not be housed together.

However, there are two exceptions to this rule spanning species that allow for multiple tarantulas to be housed together temporarily.

The first exception is when keeping tarantula hatchlings. Newly-hatched spiderlings can live together for a short period, typically a few weeks, before turning cannibalistic. If you must keep your tarantula spiderlings together, keep them well-fed and move them into their own enclosure as soon as possible.

The second exception is when breeding tarantulas—known as “cohabiting”. Keeping a male and female tarantula together temporarily is acceptable under the right conditions. However, this is extremely dangerous for the male tarantula, and I’ll discuss this further at the end of the article.

If you’re looking to keep multiple tarantulas together for more extended periods, here are four main species that hobbyists deem acceptable for a communal enclosure.

M. Balfouri is often considered to be the only “true” communal tarantula species.

While you won’t find them living together in the wild, many hobbyists have successfully housed them together without issue.

Most people will recommend limiting a community tank of M. Balfouri to 4-5 grown tarantulas. This can be broken temporarily with spiderlings, but the more tarantulas in the tank, the more likely they will fight over food.

If you plan to keep an enclosure of these tarantulas together, here are some essential tips to consider.

While the Socotra Island Blue Baboons may be docile with each other in groups, that doesn’t mean that they’re the best pick for a beginner.

Baboons are old-world tarantulas and are often more aggressive than their new-world counterparts and potentially more venomous. That being said, M. Balfouri are usually on the docile side of the baboon tarantulas.

Many species in the Poecilotheria genus of tarantulas can be kept together safely.

The safest option would be to re-house them into their own enclosures once they reach roughly a 3” leg span, though many enthusiasts have successfully kept enclosures of adults together.

It’s essential to research the specific species of Poecilotheria that you’d like to keep together, as not all of them will do well in a community. Below is a list of common species that experts recommend for a communal enclosure.

The key to a successful community enclosure of Poecilotheria tarantulas is to not give them too much space. Similar to M. Balfouri, these tarantulas will likely become aggressive if they’re allowed to establish their own territories.

If you’re a beginner to tarantula keeping, skip this one.

Also known as the “Giant Baboon”, this old-world species is known to be highly aggressive. They’re also very reclusive and typically spend most of their time in their burrow.

Despite their temperament, the Red Baboon is a beautiful species and a prized tarantula for many collectors.

Following the same trend as the previous species listed, it’s best to only keep them in a community as spiderlings. Some people, however, have managed to keep a community of adult H. Gigas with interconnected burrows.

The most challenging aspect of keeping this species in an adult community will be the size of the tank. An adult Red Baboon can reach a leg span of 8″, and their optimal tank size is 8-10.

They’re not truly communal like the M. Balfouri, so they’ll need plenty of space to establish their own territory. Combine this fact with their size, and your communal tank can easily reach 30+ gallons.

If you plan to keep H. Gigas in a communal enclosure, be sure to keep them very well fed. Overfeed them if necessary to compensate for any aggressive eaters in the bunch.

Similar to the H. Gigas, this one is an option for more advanced hobbyists.

The Trinidad Olive spider has shown itself to be semi-communal. This means that while they need their own space and territory, they’ll still come together and cooperate at times.

These tarantulas are much smaller than the Red Baboon, with an average adult leg span of 3″. They’re technically terrestrial spiders, meaning they spend most of their time on the ground.

The reason I specify they’re “technically” terrestrial is that they have one interesting caveat. N. Incei tarantulas have a reputation for being very heavy webbers, similar to many arboreal tarantulas.

While they won’t burrow into the ground, they’ll cover most of the tank in webbing and make their tunnel system out of the web. That said, they’ll need ample space to form separate territories and express themselves.

What to Take Note of When Housing Multiple Tarantulas

You’ve probably noticed a trend by now with how to care for a community of tarantulas.

Never let them go hungry. All tarantulas are cannibalistic by nature, even the most communal of species.

If you’re not careful to keep your tarantula community extremely well-fed, you might end up with a single fat tarantula.

This is especially important if spiderlings are being hatched in a community with other tarantulas. A bunch of little spiderlings running around will look like a tasty snack in the eyes of a tarantula that’s even slightly hungry.

Interesting READ  What to Do if You Find a Tarantula in Your House?

When housing a community of tarantulas, the second most important thing to note is their specific needs for the tank size. Species like the M. Balfouri and the Poecilotheria tarantulas need to be kept tightly together, while the H. Gigas and N. Incei need space for their own territory.

This is primarily due to the nature of the spider. A truly communal tarantula species will thrive in a tight-knit community. However, once that’s broken, they’ll resort to defensive tendencies like any other species.

On the other hand, semi-communal species are more like any other tarantula, just not as defensive. They won’t form a true community, so they need their own territory, but they can be kept safely in a shared environment with the proper care.

What Size Tank Do Tarantulas Need

The size of the tank that a tarantula requires can vary greatly and depends on how it interacts with its environment in the wild.

Whether you’re keeping one tarantula or starting a community, be sure to research the requirements for the specific species you plan to keep.

Arboreal tarantulas that spend their time building multi-layered webs will need a tank that’s taller than that of a terrestrial tarantula. However, if it’s too wide, they may feel anxious and unable to anchor their web across the enclosure properly.

For an arboreal species, 8”x8”x12” is an average size for a medium-sized tarantula. This equates to about 4 gallons, but the extra height dimension is crucial.

Terrestrial species of tarantulas vary a bit more in their space requirements, but most of them need enough surface area to roam.

Be careful not to go too large with your tank size as well. Ten gallons is the upper limit for most species as they’re typically happier in small spaces.

Communal tarantula species like the M. Balfouri and the Poecilotheria genus need to be kept closely together. The M. Balfouri specifically will tend to lay right on top of each other and share their burrow.

For these tarantulas, keep the enclosure size close to that of a single tarantula. If you’re keeping 2-5 tarantulas, 10 gallons is a safe bet. Any more than this, and you may need to increase tank size, but you run the risk of the tarantulas creating separate territories and becoming defensive.

Semi-communal tarantula species need space. A typical measurement is to take an average-sized enclosure and multiply it for each spider.

So if you have three fully grown Red Baboons with a 7″-8″ leg span, you’ll want approximately a 30-gallon enclosure to accommodate them all.

If you plan to keep a community of semi-communal tarantulas, consider building a tunnel system between multiple, individual enclosures to keep them from becoming anxious in a single,  large enclosure.

What to Do if You Find a Tarantula in Your House?