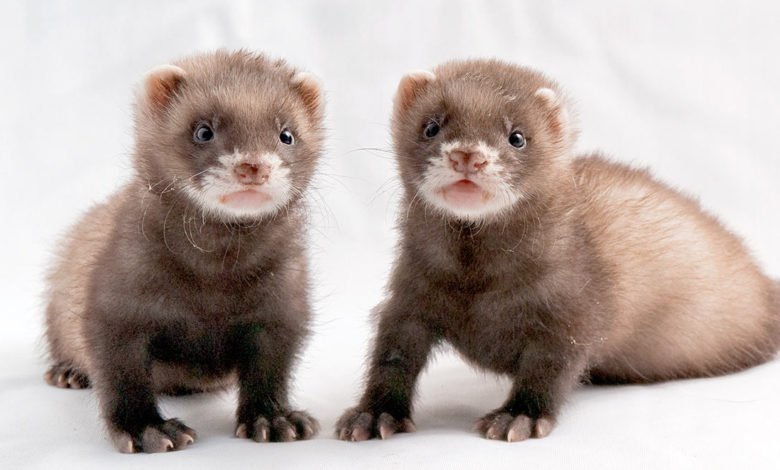 Ferrets are friendly and playful animals, and they spend most of their life trying as much as possible to catch fun.

As a matter of fact, male ferrets react even better than females when kept together. But it would be best you get them both castrated to avoid them fighting during breeding seasons.

One thing you also need to know is that ferrets playing may seem like fighting. You will hear all sorts of noises, and that gets you worried about their wellbeing.

But do not worry because even the smallest ferret can handle himself.

Real Facts About Ferrets Living Together

Ferrets are social and affectionate animals. They are made to live with a companion of their own species, which makes socializing an important aspect of training ferrets.

If you happen to adopt one, you would need to provide an environment that makes them feel they are in their natural habitat. It is either you have enough time to play with them to keep away boredom, or you keep them in groups.

Keeping ferrets in a group is the most common method of bonding with your ferrets, but you need to understand the process. Most people tend to keep ferrets of the same sex in a cage or get it mixed.

In as much as ferrets are sociable animals, they do not really get along when two males or two females are kept in the same cage. Hence the need to understand their social behavior is important.

This will go a long way in making your ferrets happy.

Well, let us start by understanding how two male ferrets react when kept in the same cage. Trust me; it is never easy.

Ideally, ferrets live happier when kept in groups and pairs of different sex. However, if you need to pair ferrets of the same sex in a cage, you would need to castrate them.

This is to prevent them from fighting in breeding seasons.

Ferrets can quickly get bored when they are alone. And if they have been out from other groups for a while, it would not be easy to reintroduce as others may not accept.

Ferrets can get along or socialized with dogs or cats but should not be left unattended.

How To Introduce Two Male Ferrets

A lot of work needs to be done when it comes to bonding two male ferrets. But, not as difficult as bonding two females. Male ferrets bond easily, but you still need to know the best way to start introducing them.

There are several methods you can take to achieve your aim. There is no best method.

You just must try different methods and go along with the one that works for you. 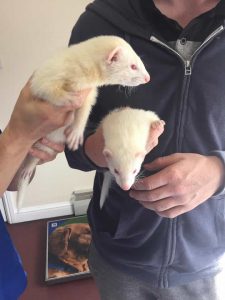 The best way to start introducing your ferrets is to start on neutral ground−−a place where none of the ferrets has territory dominance. Their territorial pride makes them not to be too friendly with other new ferrets.

There are lots of places you can choose but make sure the environment is clear from any furniture for better monitoring.

Once you have gotten a place, hold the two ferrets in separate hands with one or two-inch distance and make them sniff each other. Then keep them to play.

Playing might be a little bit scary because you could hardly tell if they are fighting or playing. Sometimes they could either be playing or fighting for dominance or having a defensive fight.

This is the period you need to have a close Observation. If any of the ferrets are clamping on the others back for long and probably resulting in peeing or pooping, separate them or spray their necks with ferretone.

The ferretone will make the ferrets resolve their conflict and focus on licking each other’s neck.

Repeat this training regularly for about 15-20 minutes every day until they get used to each other.

Why Do Ferrets Fight At First Sight of Introduction?

It is common among animals to fight at first sight. Animals hate trespassing, and territory protection is one way of surviving in the wild. Even in humans, we do not like it when others trespass.

As a ferret owner, one thing you need to get used to is fighting. It is unavoidable, but you must understand your pet’s attitude and behavior.

Their behavior during the introduction can help you distinguish if they are having a serious fight or just playing.

Pay attention closely. Your ferrets could be fighting just for fun, and nothing serious could be happening.

If you notice this, do not disengage but do not allow them to play too long. Sometimes, play fighting could lead to dominance fighting, where one ferret feels he is superior or the alpha.

The older ferret always triggers the fight for an alpha, and it always occurs between two male ferrets. This kind of fighting can be so intense.

Another form of fight you might experience between your two beautiful male buddies could be from being tired of playing. When one ferret is tired, this could lead to a more serious fight of one trying to defend himself.

You need to understand that any of the weaker ferrets could be scared when a fight wants to commence. This is a serious problem as fear could make them react to the other ferret unpleasantly sometimes because they see this as a life or death situation.

The next possible option for the ferret is to run away, but when he noticed he cannot retreat, a big nasty fight could arise 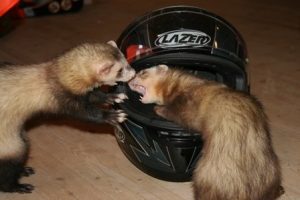 Ferrets can have a bloody fight, which can result in death when they are sexually aroused. And if they are exposed to a female on heat in their playtime, this could be even more disastrous and can lead to death.

Interesting READ  Can You Bathe Your Ferrets?

The weaker or, the smaller one dies, or they both sustain a severe injury if they are of the same size and strength. Therefore, you need to be watchful.

Even when you feel they are cool after introduction, still monitor them because you might not know what can go wrong. Another way to avoid this unforeseen fight is to castrate the two males.

This can help reduce the drive for both male ferrets to mate.

How To Reduce The Intensity Of The Fight?

Many ferrets’ owners have learned several methods to reduce the intensity of the fight between their two male ferrets. Some people spray a bitter apple on the neck of both ferrets.

This helps to reduce the deep biting as the sprays taste awful in their mouth. The bitter apple can be painful when sprayed on a wounded part. So, you would want to avoid that. 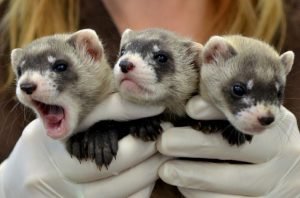 Others use Ferretone or Linatone on their neck to make the harsh-biting turn to neck licking as those products taste nice. However, to some people, the best method might not be with the use of ferretone or bitter apple.

Personally, I am not too fond of those methods because I noticed I could end up forever not having any improvement in bonding my ferrets.

I prefer to let them fight till they get their issue resolved themselves. This might seem risky because ferrets might be having a serious fight.

Still, it serves as the best way to get your ferrets bond. Moreover, the biting mostly happens at the back of the neck, which can easily be treated and heal quickly.

In summary, you should let the ferrets resolve their differences. With time, you would see their fight evolve from a severe battle to a play fight.

Tell me, what best way have you had your ferrets’ bond? I know you would probably mention the above method.

Or you could say by mixing them with females. Trust me that is what 80% of ferret owners do. Mix them up and relieve yourself of the stress of trying to train them to bond.

It is relatively straightforward and easy to monitor as far as there is enough female to go round the males.

If you want your ferrets to reproduce, you would probably have to mix them up. I do not have ferrets for business.

I just love keeping them around and maintaining them. So, the option to learn how to keep two male ferrets became a must-to-learn skill for me.

I got used to their fight, and as much as I am around to monitor them, I know they are probably not going to kill themselves. Moreover, their skin is thick, and as much as others see the fight seriously with the way they bite, I do not see it that way.

Why Is My Ferret Shaking So Much?

How Long Can A Ferret Go Without Food?

Can Ferrets Use Pine Litter

What Vaccines Do Ferrets Need?

Can You Bathe Your Ferrets?

Why Does My Ferret Follow Me Everywhere? Extremely Cute!

How Do Ferrets Show Affection? (10 Ways To Tell!)

How Often Should Ferrets Be Out Of Their Cage?