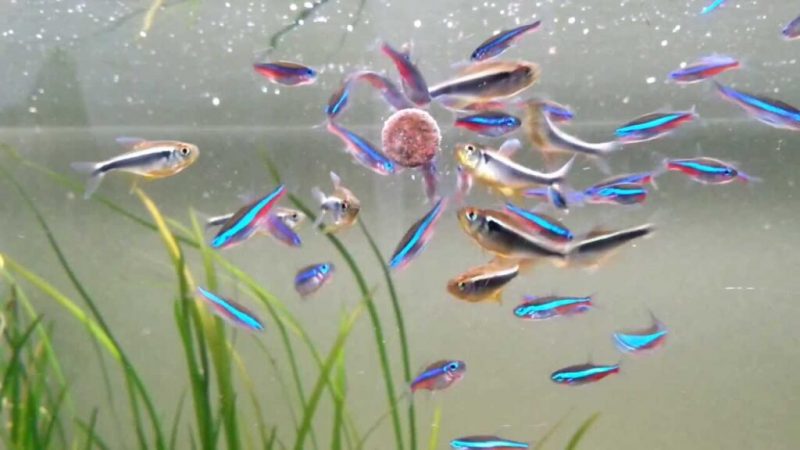 When you research diets for fish, bloodworms are inevitably listed for nearly every type of tank inhabitant. Whether freshwater or saltwater, it’s clear that fish love bloodworms.

And tetras are no different: they’ll gobble up as many bloodworms as you put in the tank.

Frozen, freeze dried, and live bloodworms are safe for tetras to eat. As long as bloodworms are prepared properly, fed to tetras in moderation, and part of a varied diet, tetras can eat bloodworms throughout nearly their entire life.

All types of bloodworms are safe for tetras to eat and will be readily consumed by all freshwater tank inhabitants. Though there are pros and cons to different bloodworms, there are minimal health concerns for tetras.

Keep reading to learn more about bloodworms and why they’ve become one of the most popular foods for both tetras and tank owners.

Bloodworms That Tetras Can Eat

Bloodworms are absolutely safe for tetras to eat. In fact, many tetras love this type of food!

There are two types of bloodworms that are labelled and sold as fish food:

As you can see, these two types of food are very different in appearance despite sharing a name. Another difference is that bristle worms have a venomous bite when alive, whereas midge fly larvae do not.

There are three ways you can purchase bloodworms in stores or online:

Each of the three different types of bloodworms has its own pros and cons, discussed in the next section.

Frozen, freeze dried, and live bloodworms have benefits as well as drawbacks. Some are unique to each type, while others apply to more than one type of bloodworm.

Interesting READ  How Long Can A Betta Fish Live Without Food?

Keep in mind, your tetra’s diet shouldn’t only consist of bloodworms. While healthy and often used as an aquarium staple, bloodworms should be used as part of a varied diet.

Besides bloodworms, consider feeding your tetras any of the following foods:

All of these are healthy for your tetra and are packed with nutrients.

Meaty foods should make up the majority of the diet, while vegetables, flakes, and pellets are used to supplement these.

How Often To Feed Your Tetra Bloodworms

How often and how much you feed your bloodworms will depend on a two primary factors:

Obviously, fry and juvenile tetras won’t need as many bloodworms as an adult. Along that same vein, a small school of less than a dozen tetras is going to eat less than a larger school of 20 or more.

A good rule of thumb is to only give your tetras as much as they can eat in three minutes. We recommend starting with a controlled portion (one dethawed block, a dozen rehydrated bloodworms, etc.) and feeding that to your tetras.

Keep an eye on the time and see if they eat it all and are hungry for more or if there’s any left over. Adjust the portions for future feedings.

Tetras should be fed at least once per day. If you notice they’re acting hungry in between feedings, supplement their meat foods with some of the options listed in the previous section.

Remember: tetras have a small stomach and it doesn’t take much for them to become full.

After they’re done eating, their stomach should have a slight bulge. It should not be distended or swollen.

We know that this article may not have covered all your questions about bloodworms. So below, we’ve answered some of the most common questions people ask about this popular food source and how it can affect their tetras.

The former is the most common type and can be found in frozen or freeze dried form. The latter can usually only be found when ordered online.

Interesting READ  Why Is My Betta Fish Standing Straight Up

Both types and all forms of bloodworms are safe for tetras to eat.

Can Bloodworms Harm My Fish?

It is possible for bloodworms to harm your fish indirectly. That is, bloodworms themselves can’t hurt your fish— but you can hurt your tetras if you feed them too many or infected bloodworms.

However, bloodworms can certainly cause health issues if you feed your tetras too many of them. Overfeeding can cause constipation, bloating, and a number of other nasty side effects that can harm tetras and other tank inhabitants.

Similarly, you should also make sure the bloodworms are properly prepared. This is most applicable to freeze dried bloodworms, which should be rehydrated for a minimum of ten minutes.

This keeps them from absorbing more water after your fish eats them, which would cause them to swell up in your tetra’s stomach.

Accidentally feeding your fish diseased or infected bloodworms can also hurt them.

These are just a few reasons why it’s so important for you to feed your tetras a healthy, varied, and moderate diet.

Can Bloodworms Live In My Aquarium?

Regarding live bloodworms, the answer is no for both midge fly larvae and bristle worms.

Midge flies are land-dwelling insects, no matter what stage of life they’re in. You could put a larvae or a mature fly in your aquarium; either way, it will drown.

This means that they won’t be able to survive in the tank with your tetra. If you have some pufferfish or a wrasse on the other hand, they could potentially live… until they’re eaten, that is.

And since frozen and freeze dried bloodworms are already dead, these also can’t live in your aquarium.

Where Can I Get Bloodworms?

You can find frozen and freeze dried bloodworms in almost any pet store or specialty aquatics store. Local shops as well as large chains usually carry them.

For both types of bloodworms, check the crude protein percentage and ingredients. Make sure you’re purchasing a quality brand.

More than likely, you’ll have to order live bloodworms online. Before you order, check the shipping times and any applicable weather warnings. It’s also wise to check their return and refund policies in case the bloodworms are dead on arrival.

Keep in mind, midge fly larvae mature after 10 days. When you take processing and shipping times into consideration, you’ll have an average of 2 – 5 days to use the bloodworms before they pass into their adult stage.

Bloodworms have risen in popularity over the decades to become a food staple for both freshwater and saltwater fish. When it comes to tetras, bloodworms are an oft-integral part of their diet and health.

This popular food comes in a variety of options that suit every tank and are within every budget range. Adding to their popularity is the fact that they’re readily available in stores and online.

Though each type of bloodworm has its own pros and cons, the benefits far outweigh the drawbacks.

If a perfect food for tetras does exist, it’s undoubtedly the bloodworm.

How To Introduce Neon Tetras To A Betta