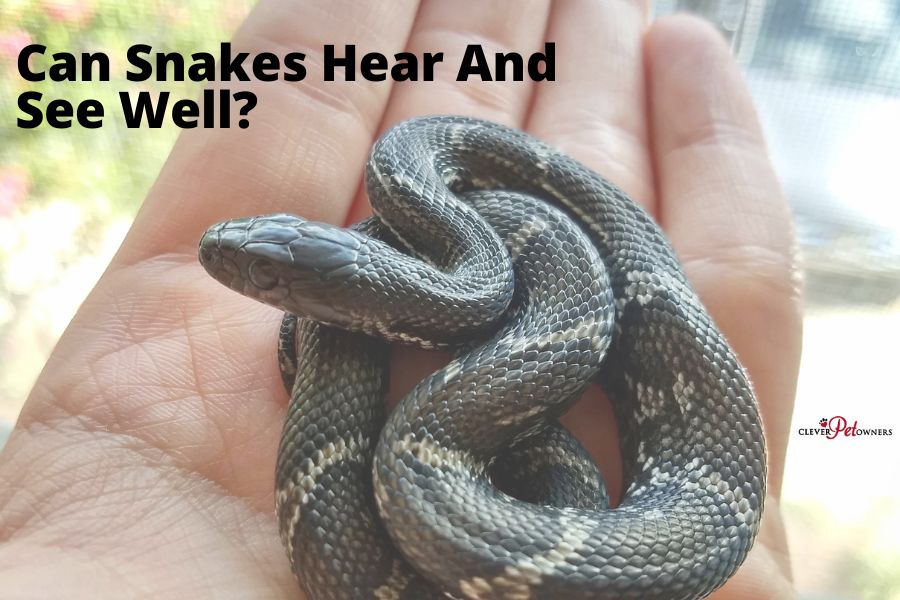 Have you ever wondered if your pet snake can listen to music? Have you wanted to know how much of their home they can see?

Snakes have bodies that are very different from our own. At a glance, it is difficult to tell if they possess the same senses we use.

The good news for pet owners (and snakes) is that they can hear and see. The range of both senses is lower than our own, but different factors can affect the sharpness of their vision and hearing abilities.

Keep reading to learn more about how snakes experience sight and sound!

Snakes are not deaf

Because snakes have no external ears, it was long assumed that they could not hear. The truth is much more interesting.

Snakes are not deaf at all! They can hear a variety of different sounds.

Many of these are picked up through the ground, but it has been recently discovered that snakes can also hear noises that pass through the air.

Sound is very much a part of their lives. Their lack of visible ears only means that they have developed a different way of utilizing their sense of hearing.

They hear through vibration

Since snakes do not have an outer or middle ear and also lack an eardrum, they are physically incapable of taking in sound the same way as humans and most mammals.

Instead, snakes react to vibrations they feel in their bodies. These vibrations react with the snake’s jawbone and send signals through the inner ear to the brain.

This allows the snake to process sounds like the footsteps of potential threats or to sense approaching prey.

For a while, it was believed that snakes could only sense vibrations from the ground. They were often non-responsive to sound stimuli produced in the air.

However, a recent study showed otherwise. Researchers measured the brain activity of snakes while they were being exposed to certain sounds played over a speaker.

This allowed them to see that the vibrations from the air stimulated the inner ear and brain.

While snakes are more sensitive to sounds that pass through the ground or solid objects, the study showed that they could also feel a limited amount of vibrations from the air, especially if they are loud and repetitive.

Lacking an eardrum and external ear means that a snake’s inner ear must do much of the heavy lifting. The structure of this part of the ear is similar in composition to our own.

However, where humans have three main bones of the inner ear, snakes and other reptiles only have one. This bone is called the columella.

The columella is attached to a part of the snake’s lower jawbone, referred to as the quadrate.

The quadrate is the part of the snake’s body that picks up vibrations and sends them to the columella, where they move through the inner ear and up to the brain to be processed.

Interesting READ  Can a snake survive with a broken back?

The sounds they can hear

The unique structure of the ear allows snakes to have a range of hearing that falls somewhere between 20 to 2,000 Hertz, depending on the species.

This is not as broad as the range most humans can hear (20 to 20,000 Hertz), but it still allows snakes to experience a variety of low sounds.

For instance, the human voice typically falls between 80 and 255 Hertz, making it possible that your pet snake can hear your voice as long as it can sense the vibrations!

Snakes see clearly when it is most needed.

With more than 3,000 species of snakes across every continent except Antarctica, they have successfully adapted to all sorts of different environments.

Depending on the time of year, some snakes even change which part of the day they do their hunting.

As all snakes do not hunt or explore at the same time, their eyes need to be accustomed to the amount of light they most frequently experience.

Nocturnal snakes will have blurred vision if something forces them to be active during the day.

At the same time, diurnal species like rat snakes and garter snakes may find it more difficult to navigate by sight when it is too dark.

There is an old belief that snakes are colorblind. While it is true that they do not see the same range of pigments as humans, snakes do have dichromatic vision.

This means that they can see two primary colors. In their case, those colors are blue and green.

Much of nature occurs in these two colors, so snakes are not necessarily at a disadvantage as dichromats. Just don’t expect your pet snake to know that a red light is red!

We have already learned that snakes differ in the time of day they like to hunt. Snakes that are more nocturnal are also more sensitive to UV light, which allows them to see more clearly with minimal amounts.

Nocturnal snakes achieve this because their eyes have a lens that allows more UV light to pass through, letting them make the most of their available light.

Conversely, active species during the day need to block more UV light to see clearly. Their eyes have adapted to allow the lens to filter out UV light. Think of it like a pair of built-in sunglasses!

Certain species of snakes have an extra way of seeing. This is not done with their eyes, but rather through something called the pit organ.

The pit organ is a hole covered by a thin membrane that vipers, pythons, and boas have near their nostrils. The pit organ contains a receptor that is very sensitive to infrared radiation.

It detects this radiation as heat and allows the snake to create a kind of thermal image of an object. They use this as an aid to hunt prey or even to spot predators they need to avoid.

Even though the pit organ is not connected to the eyes, it still allows the snake to ‘see’ its environment.

Hearing and sight can differ among species.

Vipers and others can alternate between infrared and standard vision

The species that are lucky enough to have the ability to make thermal images out of infrared radiation really do see the world from two sets of eyes!

Researchers conducted an experiment to test whether or not those snakes would be to navigate an environment using only infrared sensing or only their physical eyes.

Both scenarios turned out to be true. When the physical eyes were covered, the snakes relied exclusively on thermal images.

Likewise, when the pit organ was covered and no longer able to detect heat, the snakes used standard vision. This ability offers them a great advantage for survival.

Some snakes can enhance vision clarity when they are threatened

Another fascinating adaptation some snakes have made involves the movement of blood vessels in the thin, transparent layer covering the eye.

When faced with a threat, the snake’s body responds by constricting the blood vessels that cover the eye so that it can fully utilize its sense of sight.

The result is a sharper, clearer vision compared to what the snake sees while at ease.

Researchers have only begun to scratch the surface when it comes to studying snakes and their hearing.

The recent study that analyzed the ability to pick up vibrations from the air only used a small sample size of eleven snakes, all belonging to the same species.

There is a great possibility that we will find variations among other species that may possess higher or lower sensitivity to sound.

Just as snakes utilize vision differently depending on their unique needs and environment, it is likely that they do the same with hearing.

Snakes do not have the keenest set of eyes or the most perceptive ears in the animal kingdom, but they are masters at making their own abilities work for their needs.

There is much yet to be learned about how these creatures see and hear the world. One thing is for certain: they do both.

If you are handling a snake that seems to enjoy the sound of your voice, that may be exactly what it’s doing.

Snakes will hear you approaching and know you’re on your way, even if you haven’t found a partner for the opera.

They see a world that is cooler than our own, as dichromatic vision does not have the red we know, but they use light and heat to their advantage to make up for it.

Snakes are fascinating animals who have learned to see and hear in the ways that suit them best.

Are Snakes Afraid of Cats and Dogs?