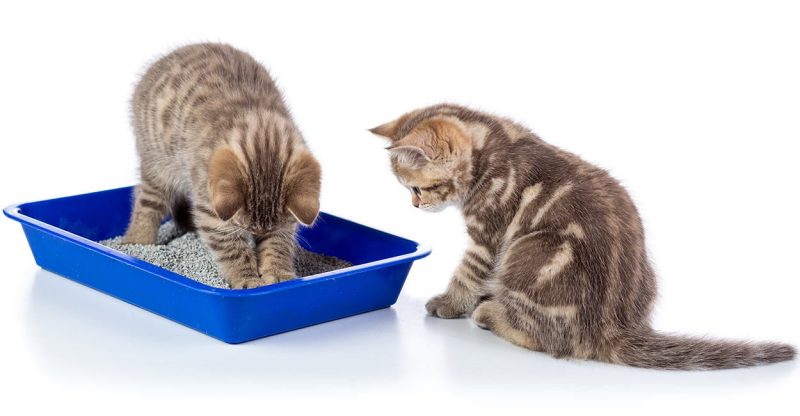 Having multiple cats can multiply the fun and joy of owning a cat. One thing you’ll notice when getting two cats is there is two times the amount of food, toys, litter, and treats.

It can be exhausting to the wallet and to the owner to have so many things for their cats. Cutting back on some of that stuff might be something that comes to mind. Letting cats share some of their toys and treats seems like a good idea.

It’s a good question. Nevertheless, some cats may not mind sharing but most will not enjoy it.

Even cats that are siblings need their own place to relieve themselves. Gender might play a small role in whether or not they take to sharing but in general, it doesn’t play a big role.

Read this post to find out more tips and advice regarding bonding cats.

If you have two cats from the same litter, you will notice how heartwarming their bond is. When they aren’t separated as kittens, the bond between them grows stronger into their adulthood.

Some shelters won’t even let people adopt the siblings individually. With a bond that incredible, you would think that they wouldn’t mind sharing a thing or two.

Cats, as a rule, aren’t great at splitting their things. They are notably bad at sharing things that are essential to them.

Necessary things like food, water, shelter, and their litter box! Some cats may not mind sharing a litter box, however, they are the exception to the norm.

If you try and get littermates to share a box because they are siblings, you might be surprised by how unlikely they will enjoy doing so.

Typically, gender will not affect whether or not a cat will share their box. If two cats were to be fine with sharing a box, it doesn’t have much to do with gender.

However, it could play a part in the likelihood that they will. For example, two females, or a pair of cats of the opposite gender, are more likely to share a box than two males.

This is because two male cats are more inclined to fight or challenge each other than other pairs of cats. Male cats have the instinct to establish a hierarchy between each other.

Still, it’s unlikely that any cat will enjoy sharing their box, male or female.

Cats need privacy when going to relieve themselves. Even though they may have a close bond with their sibling, they still want and need that privacy.

Interesting READ  Why Do My Cat’s Eyes Change Color? 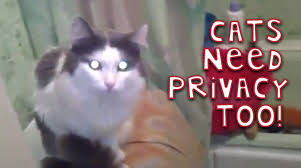 Not having that privacy can stress a cat out and may lead to them going out of their box for a place to go.

Not only do cats crave privacy when relieving themselves, but they also like a clean space. Cats are tidy creatures and prefer things to be tidy as well. Sharing a box with their sibling will cause the box to fill up pretty quickly.

They don’t want to get their paws into waste that isn’t theirs. If a cat owner isn’t fast enough in cleaning it out, it can deter the cat from using the box!

Another very important reason cats don’t like to share their box with their littermate is that they are territorial. A cat may claim a litter box as theirs. They claim the box by using it.

Their waste and scent are their way of marking it as theirs. If one cat has already claimed the litter box, seeing their sibling use their box may cause a fight to ensue.

The fear of aggression from their sibling may cause the other siblings to not want to use the box. It’s very important that cats have their own space due to their territorial nature.

If they are forced to share something as private as their box, this can lead to territorial aggression. 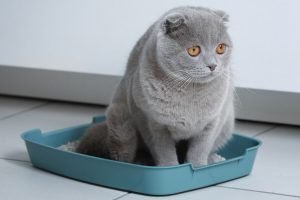 If you have your cats sharing a box, it is very important to know the signs of a territorial cat, in case their behavior turns into aggression. It is very common for cats that share a litter box to develop territorial behavior.

Territorial aggression is normally shown through growling, hissing, biting, swatting, or full-fledged attacks. A lot of the time, a cat that exhibits this behavior will be stiff and have a straight-legged posture.

Their ears may be straight up and have constricted pupils.

The cat that is the victim of this behavior will be the opposite of this. A cat that is less dominant will keep their body close to the floor. They may tuck their head and curl their tail. Their ears will be pinned down and flat with dilated pupils.

Watch out for this behavior in order to stop any flights from occurring between your cats.

How To Stop Territorial Aggression In The Litter Box

There are several reasons why a cat may exhibit territorial aggression, however, one of the most common reasons is due to the litter box. The aggression causes tension amongst the cats and their owner!

Here are some ways to help prevent this from happening and keep peace between kitties.

Get Another Litter Box

The general rule when it comes to multiple cats and the litterbox is one box per cat plus an additional one. So, that means if you were to have three cats, you would want to get four boxes. Sharing the litter box is an extremely common reason cats become aggressive for territory.

Getting each cat their own box is a great start to eliminating this behavior and possibly end it completely!

If you already have separate boxes for your cats, a dirty box may be what’s behind their quarrels. If one of the boxes isn’t cleaned enough, this may cause a cat to move to a box that is.

Interesting READ  How to Calm Your Traumatized Cat After a Vet Visit: 4 Techniques!

The problem is that the other box is owned by another cat! Fights between cats can be prevented by regular upkeep of boxes.

Making sure all the litter boxes are clean can help minimize cats from straying from their own box.

As we know cats aren’t big on sharing. Especially when it comes to the essentials.

Even if cats are not fighting where they are eating, this could still be the source of their violence. All the sharing can leave a cat feeling possessive of whatever they feel like holding on to. Setting up extra feeding stations will allow cats to pick which one they want to eat at.

Another tip is to set up those stations on opposite sides of a room to try and keep the cats from crossing each other paths!

Change Up The Box

You might see that even though your cats have separate boxes, one cat tends to wander into a box of the other. If it only happens once in a while and the other cat doesn’t mind, then great!

However, if it happens a lot and is causing aggression between the cats, it’s concerning. The reason one cat may not like using their own box could be that they don’t like something about it.

A great tip is to experiment. You can switch up litters, boxes, and locations to see what is making your cat use another box.

The right litter could be the thing your cat needs to stay in their own box and end all the fighting!

Go To The Vet

If for some reason nothing is working on your cats, it’s best to take them to the vet. It might not be a sharing problem that is causing your cats to fight, but a medical one.

If there isn’t a medical reason behind the fights, the vet can still help by providing you with resources to help.

Even though we are taught as kids that sharing is caring, it’s not something instilled in cats. Cats are territorial creatures that enjoy their privacy when going to the bathroom.

They like things tidy and sharing their box with their siblings doesn’t keep things clean! Sibling or not, the answer is the same when it comes to sharing, cats don’t like it!

Gender doesn’t have much of an effect on how well cats share. Although two male cats are the least likely to share a box due to their instinct to challenge each other.

Cats need their own space to relieve themselves, otherwise, they may become aggressive. Territorial aggression can be avoided by getting cats their own boxes and following some helpful tips.

It should be obvious that cats aren’t sharing creatures, since they always hog the bed!

Is It Okay To Lock My Cat In The Bathroom At Night?

Why Does My Cat Sneeze Multiple Times in a Row?

What Is The Youngest Age A Cat Can Get Pregnant?