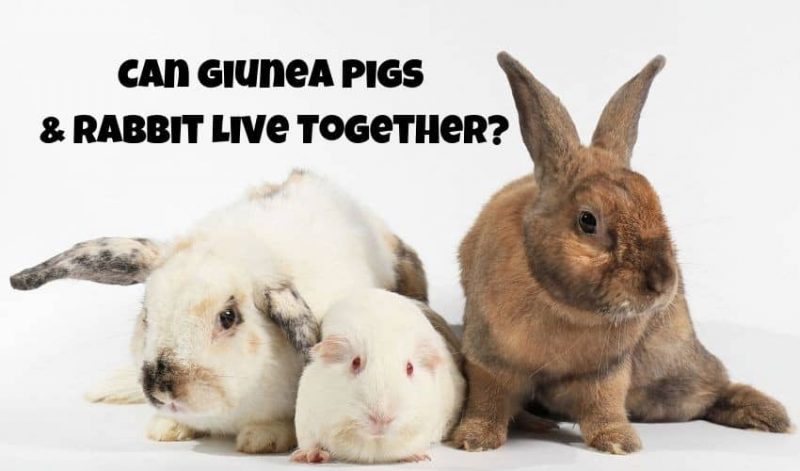 Rabbits and guinea pigs are great to have as pets. Small, veggie eaters, and super cute are just a few of the wonderful qualities of owning them.

But just because they look somewhat similar doesn’t mean they are identical with certain behaviors. Most would think that all small animals are destined to live together.

The best companion for a rabbit is another rabbit, and the best cuddling partner for a guinea pig is another guinea pig. Many issues need to be avoided as the owner.

It is best to be vigilant if you are housing these two together. They have major problems getting along; they could potentially hurt each other if holed up in the same area.

Once, long ago, they were kept together, providing a friendship for each other. This was when neutering rabbits was considered an unsafe procedure.

Now that both sexes of rabbits and male guinea pigs can be safely neutered with no issues, you should reconsider putting them together in the same environment. Of course, there are other reasons to keep them separate, so here are a few reasons why guinea pigs and rabbits can’t live together.

Seven Reasons Why Guinea Pigs And Rabbits Should Not Live Together

There are crucial things to consider before housing rabbits and guinea pigs together. When owning these cute creatures, you want to ensure that they have the best quality of life.

When housing these two together, you run the risk of potential fights, diseases, and cage space. Here is what you need to know.

Rabbits are bigger in size than guinea pigs, and they like to throw their weight around and show that they are in charge. When rabbits kick out, they could hurt a guinea pig pretty severely.

It is vital to keep up with cutting back their claws. They could wrongly strike a guinea pig’s face and cause corneal ulcers, blindness, or an infection.

To avoid trips to the vet or treating cuts, separate cages and proper grooming are a must. 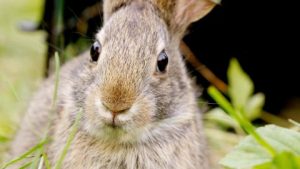 Again, rabbits are the larger animal, so to control the cage, they will show who the boss is. In general, rabbits are fighters. Rabbits tend to fight their kind, especially if they are the same gender.

Rabbits are bullies, be warned. This is a big reason why you should keep your guinea pig and rabbit away from each other.

This is another reason why you should be careful with housing rabbits and guinea pigs together. They transmit diseases amongst each other that their genetic design can’t handle.

When both animals cohabit, rabbits give off Bordetella Bronchiseptica, which will infect their respiratory tracts. This is highly contagious to guinea pigs.

This bacterium only lives and passes between two animals when they are close to each other. Other diseases can be passed along with each other, but this respiratory illness is significant and most commonly seen.

Interesting READ  When To Separate Male and Female Rabbits?

Save yourself some money from the vet and keep these two separate.

Rabbits and guinea pigs are different when it comes to space. For example, rabbits need to have freedom, hop, skip, and jump.

In the wild, rabbits are made to move, run, and cover land. When it comes to guinea pigs, they have short and stubby legs.

They can’t travel too far. Also, guinea pigs like to curl up or hide.

When places are too cramped, they may get nervous or stressed. When guinea pigs have shelters to hide under, they feel more comfortable, but there may be no room for the extra protection if in a cohabitation situation.

Each animal has habitat needs, and they need to be answered.

There are more than just diseases and fighting to be worried about. Each animal has strict dietary needs that its owner needs to pay attention to.

They both may be herbivores. Plants are their primary source of nutrition, you would think that they could eat and have a well-balanced diet, but there are significant differences.

Rabbits are relatively easy to feed. They are herbivores.

How hard can that be? Be aware they require a balanced diet that includes hay, fresh veggies, fruit, and a few pellets.

They have sensitive digestive tracts, so they need to be done gradually when they transition to hay or pellets or introduce new fruits and vegetables. Your rabbit’s digestive system needs to adjust to the change and fresh foods.

Also, rabbits can make their own Vitamin C, so they don’t need to consume much of it.

So, they are required to consume vitamin C rich foods daily. Vitamin C pellets can do this with no dried food or seeds added.

They can be found at any pet store. 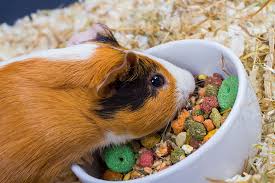 How Are They Different?

They have a similar diet; pellets, hay, and fresh vegetables are their primary nutrition sources, but guinea pigs require vitamin C. They require it in their daily diet, but rabbits can create their own and rarely need it.

Guinea pigs could suffer from a deficiency known as scurvy when lacking vitamin C. This can be avoided by giving your guinea pig a cup of fresh vegetables, which should be primarily leafy greens.

This is a significant issue between these two animals cohabiting together. Since rabbits are more prominent in size, they will show the smaller animal who is the boss. This is usually an issue during mealtime.

Since they have similar diets, a rabbit can eat close to whatever a guinea pig eats. This is more common for a one to one type of cohabit environment.

Again, guinea pigs become stressed during these situations and will look for places to hide. If you are housing them together, which is not recommended, you need to get your little guinea pig friend a small enough shelter for it to hide under but not big enough for the rabbit.

This is a mechanism to protect themselves from the bigger animal. It will keep them calm and allow some “alone time” away from the rabbit.

With a guinea pig being bullied, and yes, it is usually the smaller animal that will be ridiculed, you need to watch for significant signs. Since rabbits are the larger animal, they will always show the guinea pig who is running the cage; they will cause a lot of harm to the guinea pig.

When guinea pigs are being bullied, they will become so stressed that they will lose weight. This is a significant sign that can’t be ignored because it is unhealthy for any animal to be underweight.

If this is being noticed, it is time to move them to separate shelters.

Bullying is a serious issue between rabbits and guinea pigs; it can alter the cage’s whole environment and diets and cause injury. The only one that would be suffering is the guinea pig due to its size.

Be sure to protect the smallest pet.

When it comes to communication, it is different between rabbits and guinea pigs. Think about it as putting apes and humans together to co-exist.

We don’t communicate just like monkeys, so why would you expect rabbits and guinea pigs to communicate well just because they look similar. Both can become lonely and frustrated without their own kind. 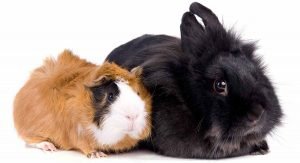 Because there is frustration between communication, mostly shown from the rabbit, the rabbit could attack.

Rabbits also like to be groomed by their kind; they are social when it comes to being around other rabbits, but guinea pigs rather keep to themselves. They like to hide away.

So, in conclusion, rabbits and guinea pigs should not be housed together. It is not worth the trouble, and the safety of the animals is more important.

Rabbits are big bullies, and since they are bigger, they will show the guinea pig that. Yes, there are people out there who have rabbits and guinea pigs co-existing in harmony, but it is probably because they have grown on each other and have been with each other since they were young.

They have adapted to each other, and that results in minimal issues. If you plan on doing this, you need to be sure that you get a refuge area for the guinea pig to hide away on bad days.

Remember, they tend to keep to themselves, even if they had their own kind with them, so having their own hideaway is essential with housing rabbits and guinea pigs together. Enjoy your pets.

Do Guinea Pigs Like the Dark? Can They See Properly?

Will My Rabbit Run Away If I Let It Outside?