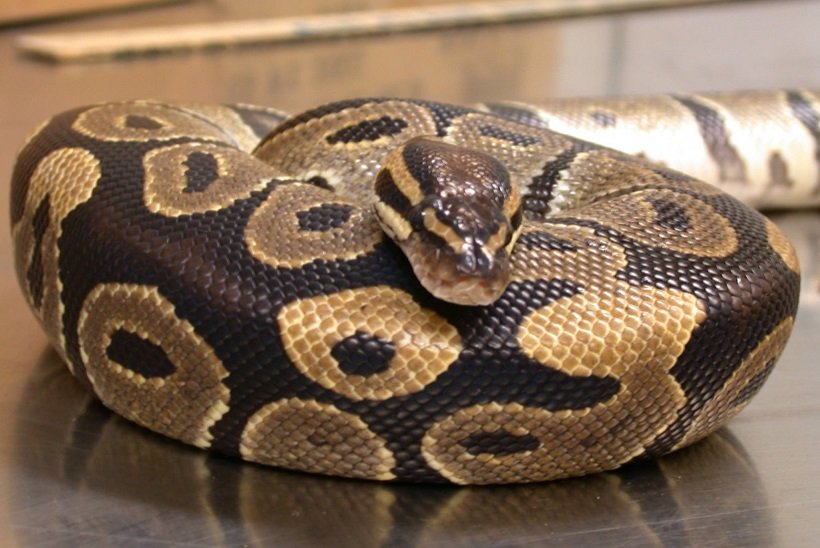 When it comes to household pets, most people would immediately think of dogs or cats, animals that have been tamed and considered man’s companions for thousands of years. On the other hand, there are less popular pets, such as fishes, spiders, rabbits or bunnies, hamsters, and even pigs.

While any animal has the potential to do harm, most of the animals mentioned typically are not thought of as dangerous. Yet, what happens if one wants to own a pet that is considered dangerous, like, say, a python? Can these mighty creatures be dangerous as pets?

It is entirely possible to have a pet python that is harmless to you and your family as long as you take the necessary precautions. Some factors contribute to increasing or reducing the risk of keeping a pet python, including the socialization of the python, how knowledgeable and experienced the python handler is, and precautions when it comes to having children around the python.

How Dangerous Are Pet Pythons?

Pythons and boas are referred to as “constrictor snakes” because of their ability to wrap themselves tightly around an animal or human, effectively cutting off the blood supply to said animal’s or human’s brain.

After being cut off from the body’s blood supply, the central nervous system will shut itself off within minutes. The snake often will swallow the now-dead animal or person whole. Thankfully, even with this deathly characteristic, deaths caused by constrictor snakes are very rare.

According to the Human Society of the United States, since 1978, there have only been 17 documented human deaths caused by constrictor snakes in the U.S.; 7 of these victims were children, including 4 babies. So, although constrictor snake-related attacks and fatalities are relatively rare, they do happen. Thus owners should always handle these mighty creatures with care and caution, just like any other pet.

Wild Python vs. Bred in Captivity

I have mentioned that the python my father had was a captured African rock python. What is the significance of pointing out the python was captured?

For one thing, a captured python will often have a different temperament from one that was bred in captivity. Snakes do not have the ability to bond with humans the same way dogs can, no matter whether they were captured or born in captivity.

However, snakes that were bred in captivity will have a much easier time thinking of humans as non-threatening creatures that care for them and provide them with food and shelter. Snakes that were captured can be more easily stressed and therefore more aggressive. They also require more socialization so as not to recognize humans as potential prey.

Interesting READ  Do Ball Pythons Like To Be Held Or Pet?

Additionally, wild-caught pythons can also carry parasites or a variety of bacteria and viruses that are common in their natural habitat. If not properly quarantined and treated, these snakes can spread diseases and infections to the habitats in their new environment, suffer from illnesses, and, eventually, die.

On the other hand, a credible snake breeder is able to safely breed, socialize, and keep a python healthy until it is ready for a new home. Therefore, it is best to choose a python bred in captivity by a reputable breeder as they are less likely to be dangerous as pets.

Are Pythons Safe Pets for Children?

It is generally good practice to not leave children unattended around pets like dogs or cats. The same thing applies to pythons. Most animals will not go out of their way to attack a bigger creature, such as a human teenager or adult.

However, given the size of children, especially the defenseless babies, some animals do not take the same precautions around these little humans. Small children can also unknowingly irritate a pet python, provoking an attack from it.

It is also important not to let pet pythons view children as potential prey. This mainly applies to a python’s sense of smell: do not let children take on the smell of what your python considers as prey. For example, if you often feed your pet python chicken, it is a good idea to not let your child play with the python right after visiting the chicken coop.

Remember, snakes mostly hunt by sensing sources of heat and smell, so be careful not to smell like a python’s food. Therefore, if you have a pet python and children, teach your children how to behave around the python and to take a shower after playing with the farm animals.

I will start by saying that my father had an African rock python before I was even born. By the time I was five, the python had grown to almost 12 feet.

He was a captured python and was not socialized to be friendly around humans. While having the python, we took several precautions around him to ensure that he wasn’t stressed and was safe to be around.

He was kept secure in a metal cage that imitated his natural habitat by filling it with soil, branches, and a tub of water he could bathe in. He was fed a live duck or chicken every 10 to 12 days, mostly whenever he showed signs of hunger to keep his stomach satisfied as a hungry python is more likely to be aggressive. This also allowed him to utilize his hunting instincts and provided some exercise.

This story just proved that it’s entirely possible to keep a python in the house safely. Of course, any pet, including a python, has the potential to be dangerous. However, as long as you take the necessary precautions, you should be able to enjoy having a harmless pet python in your home.

Feeding a Pet Python Can Be Hard

You might have heard that snakes are low-maintenance pets. However, there is more to just maintenance when it comes to constrictor snakes, and it often requires a good deal of knowledge to keep a pet python healthy and happy. For example, feeding a pet python requires appropriate adjustment as it grows in size and appetite.

The most common food to feed pythons is dead mice (live mice still can injure pythons). Some pythons, often captured, will prefer live animals. If this is the case, do not leave the python unattended until it has consumed its meal to ensure no injury is inflicted on the python by the live animal.

Pet owners should adjust how much they feed to a python as it grows. Pythons need to be fed sufficiently as a hungry, malnourished python is more likely to be aggressive and, thus, more dangerous.

Yes, Pet Pythons Can Be Dangerous

Any pet can be dangerous, can’t it? But we still have pets because most of the time, they are pretty harmless. The same thing applies to pet pythons. If you’re thinking about having a pet python, it is a good idea to find pythons that were bred in captivity (preferably with a temper that suits your household) from a reputable breeder.

Also, it is advisable to educate yourself on how to take good care of a python and take the necessary precautions for having children around your reptilian pet. Pythons are often low-maintenance pets that do not consider humans as food, and thus they can make great exotic pets if adequately taken care of.