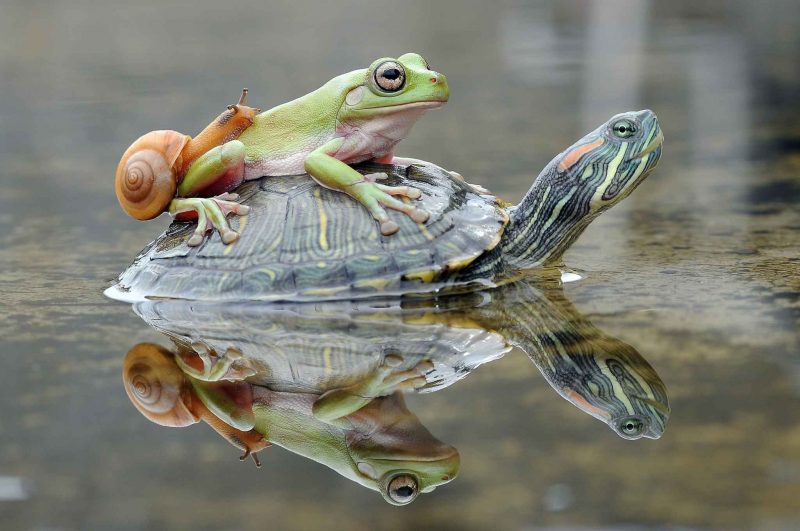 Frogs and turtles are fascinating creatures that can coexist peacefully but only under certain circumstances.

If frogs and turtles are kept together in a tank or other small enclosure, the larger animal will likely eat the smaller animal. Frogs and turtles should be kept in separate tanks or large outdoor ponds to avoid this type of conflict.

If you currently keep frogs or turtles as pets or are considering doing so, it is essential to understand how their environment can influence their behavior and ability to coexist.

Can Frogs and Turtles Live in The Same Tank?

Frogs and turtles should not be kept in the same tank. This is primarily because a tank cannot provide enough space for each animal. As a result, they will end up competing for food, stressing each other out, and inevitably attacking one another.

Another reason to avoid cohabitating these animals is that they often have different tank requirements, including the size, temperature, lighting, and contents of the tank. Such requirements depend on the breed of each animal.

Most tanks are not large enough to provide the necessary space for frogs and turtles to cohabitate peacefully. Both species need ample space to swim, hunt, and hide.

They also need to be able to engage in such activities without constantly running into one another. This is hard to do in a tank environment, and the animals will grow stressed.

Frogs and turtles require hiding spots in their environment to feel comfortable and safe. Foliage, rocks, and logs can create effective hiding spaces for both species. In a tank, however, it can be difficult to create enough hiding spots for each animal due to limited space.

Tanks are also too small to provide adequate distance between hiding spots. Frogs and turtles need places to rest and retreat, and if their hiding spot is too close to one another, they will not be able to hide safely.

Tanks do not work well for housing frogs and turtles together because they are too small of an environment. Without enough space, the animals will grow stressed, and this can lead to a life-threatening situation for one or both animals.

If the frog and turtle are about the same size, they may hesitate to attack one another at first. However, the animals will still compete over the food provided by the pet owner. Over time, this competition can lead to stress and result in an attack.

If one animal is distinctly larger than the other, a predator-prey relationship will likely develop, which will also result in stress and an attack. Without adequate space, the animals will struggle to avoid this conflict as they will be unable to hide from one another or outswim one another.

Prolonged periods of stress will weaken both animals, making them more susceptible to injury and death.

Interesting READ  How To Keep Frogs From Pooping On The Porch?

Turtles are known to dig up and eat live foliage, soil their water easily, and quickly leave a build-up of waste in any substrate at the bottom of the tank. This does not create an ideal environment for most frog species since they need significantly less water, use the foliage to hide, and use the substrate for burrowing.

There is also temperature to consider, of both the water and the air inside the tank. The ideal temperature ranges vary from breed to breed and from species to species, as does the lighting, humidity, and type of food. These environmental factors need to be taken seriously, as any mistakes can lead to the death of an animal.

It can be difficult or impossible to create a tank environment that sufficiently meets the needs of both frog and turtle species.

Turtles are considered omnivorous and benefit from a diet that includes a combination of plants and live prey. Examples of live prey for turtles include crickets, shrimp, small fish, and worms.

On the other hand, frogs are considered general carnivores and opportunistic eaters. They benefit from a diet of live crickets, grasshoppers, locusts, and mealworms.

Another food option is pellet food, and while pellets can sustain both frogs and turtles, providing live prey gives the animals the chance to hunt like they would in the wild. This type of enrichment will increase the quality of life for your pets.

The frequency at which you feed your animals should be based on the individual requirements of the breed of animal. Following a regular feeding schedule that is appropriate for the needs of each breed is a necessary step in successful pet-keeping.

Some of the dietary needs of frogs and turtles can overlap, but for a lot of breeds, this is not the case. Subsequently, one or more of your animals could end up overfed or underfed if they are kept in the same tank.

For both species, the amount of food and the frequency of feeding depends upon the breed of the animal. To provide the healthiest diet for each, it is best to keep frogs and turtles in separate tanks.

Which Is The Likely Winner? Frog or Turtle?

If a frog and a turtle are kept in the same tank, it is more likely that the turtle will come out on top since turtles tend to be larger. However, larger frog species, such as an Argentine Horned Frog (Ceratophrys ornata) or an African Bullfrog (Pyxicephalus adspersus), have been known to eat turtles if the turtles are on the smaller side.

More commonly, though, turtles are the larger species and are more likely to win out over a frog. Turtles have size on their side, and they also have the defense of their shell.

Interesting READ  Why Is My Turtle Not Moving?

A turtle’s shell makes it difficult for the frog to successfully attack since the shell shields most of the turtle’s body. In addition, turtles have a strong bite that can easily tear through a frog’s skin.

It is also thanks to their speed that turtles are the likely winner. They can outswim frogs easily, and in a tank, the frog will have limited hiding spaces and no chance of escape.

Comparatively, if the frog is larger than the turtle, the turtle will be more hesitant to attack. If the frog can swallow the turtle whole, it might have a chance.

It is also crucial to know whether or not a frog breed is toxic. Frogs that secrete toxins, such as Pickerel Frogs (Lithobates palustris), can poison and kill turtles if the turtle swallows the frog. In this case, nobody wins.

Can Frogs and Turtles Live Together in A Pond?

An outdoor pond can successfully serve as a common living space for both frogs and turtles. Ponds provide a more natural environment, giving each creature the space, protection, and food that they need.

If you have the means to maintain an outdoor pond for frogs and turtles, there are a few things to consider.

First, the pond should be large enough that each animal can essentially have its own territory. Along with this, the pond must have adequate amounts of foliage and rocks to create the needed hiding spots. By providing enough swimming space in the pond and enough hiding spots, you can mitigate most of the issues that can arise from keeping frogs and turtles in tanks together.

Being outside, a pond is likely to attract other species as well. Visits from other animals, organic debris, and weather turbulence can increase the variety of food options in the pond and lead to less competition over food.

A challenge of the pond environment is that ponds are commonly nonrestrictive, meaning that the animals are not trapped or contained. This can mean that your frogs and turtles may come and go or leave entirely. In a more natural environment like a pond, the pet owner has less control over the external variables than they would if they kept pets in tanks.

An outdoor pond can also pose challenges if you live in an area that gets cold over the winter. If you have an outdoor pond or plan to start one, be sure to research how to winterize your pond.

How Can I Prevent My Frogs and Turtles From Eating Each Other?

To keep the animals safe and healthy, frogs and turtles should not be kept in the same tank. A single tank is simply too small to adequately house both species.

If the alternative of an outdoor pond is not a possibility for you, another option would be to have two tanks, one for frogs and one for turtles. By keeping two separate tanks, pet owners can still meet the needs of their animals, keeping them happy and safe.

Learning about what each animal needs to survive and what environments can foster a healthy coexistence and help you improve the quality and length of life for your frogs and turtles.

Why Do Frogs Croak at Night?

Do Turtles Bully Each Other?