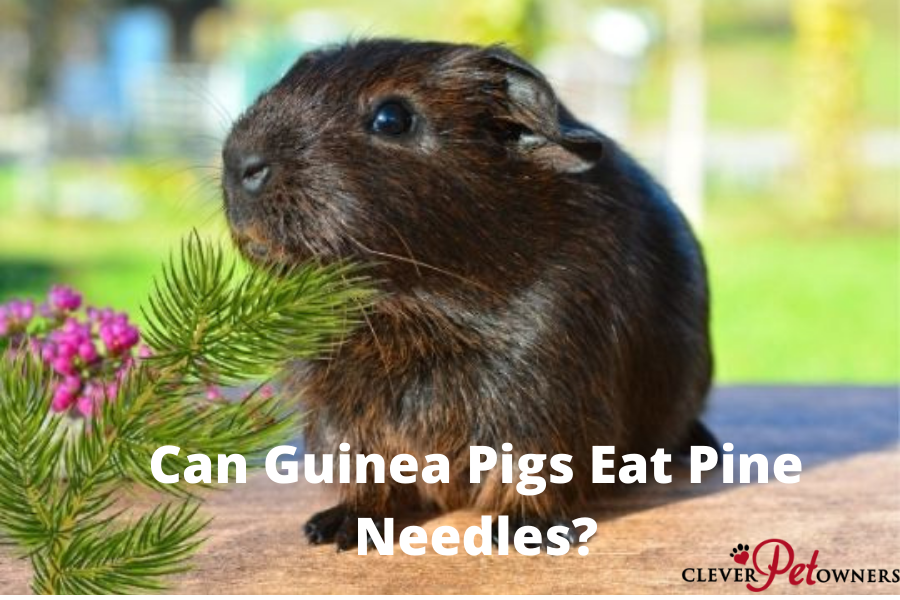 When the winter season comes, and our home gardens dry up, it’s easy for pet owners to look around at the surrounding greenery and wonder what is okay for their guinea pigs to eat.

You may be tempted to look at the pine needles that are in constant supply as a source of nutrients for your piggies, but pine needles are never a good option for your guinea pigs.

To learn more about how pine needles and other pine products can harm your piggies, keep reading.

Pine needles are never a safe option for guinea pigs to eat for various reasons. The first is that the ends of pine needles tend to be very sharp.

Swallowing these pointed needles could potentially cause damage to the inside of your piggies’ mouths or throats.

Pine needles are not nutritional food for guinea pigs, and it is never wise to feed your pets something that doesn’t benefit their nutritional requirements.

Not only do pine needles not benefit guinea pig dietary needs, but they are difficult for piggies to digest.

Lastly, pine needles are unsafe for your guinea pigs due to their strong, phenol-based aroma.

The scent of pine and pine needles can be dangerous for guinea pigs because they have susceptible respiratory systems.

If you put a Christmas tree up in your house for the holidays, ensure that your guinea pigs are at an appropriate distance from the tree.

Pine needles should never be allowed to fall into the guinea pig cage. During floor time, verify that there is no chance of guinea pigs interacting with pine needles from your tree.

Although it is strongly inadvisable to house guinea pigs outside, if your guinea pig enclosure is outdoors, make sure that there is no possible way that pine needles can enter their cage.

Keeping your cage location away from any pine trees in your yard is highly recommended.

Pine chews and branches are not safe for guinea pigs to chew on since they both contain the dangerous phenols in pine products.

As mentioned previously, phenols are an irritant to guinea pig respiratory systems and should be avoided at all costs.

Guinea pigs do have ever-growing teeth that need chews to wear them down. Try giving your guinea pigs applewood sticks as an alternative to pine chews.

Not only do they love the taste and smell, but it will help wear down their teeth.

Although pine bedding used to be popular for guinea pigs in the past, it is no longer an acceptable option.

There is reason to believe that pine shavings are actually toxic to guinea pigs. The phenols in pine shavings have been linked to pneumonia and respiratory infections.

Research suggests that prolonged contact with phenols can cause kidney and liver damage in guinea pigs and other pets.

Using paper or fleece bedding is the most recommended option for luxury piggy living.

While some members in guinea pig forums suggest pine cones for guinea pigs as play items and chew things, we do not advise giving pine cones to your guinea pigs when there are so many safer alternatives.

Pine cones may not have as many phenol oils as pine shavings, but they still aren’t exactly safe.

Pine cones have sharp barbs that could be dangerous for guinea pigs who attempt to chew them.

Even after being rinsed in hot water, pine cones from the outdoors can still house bacteria and pollen that are not safe to introduce into your piggy environment.

Pine straw can be a choking hazard for guinea pigs as it is sharp and brittle.

Bumblefoot is a condition that is often caused by guinea pigs being overexposed to unclean living conditions.

The acidity of their urine can cause burns on their soft, padded feet and makes it uncomfortable for piggies to walk.

Some pet owners may say that their guinea pigs like pine needles or will proactively search for pine needles throughout the holiday season during floor time.

This may be true, but also consider that humans often like and eat things that aren’t good for our bodies too.

An extremely explorative guinea pig might be willing to eat a wide range of things that aren’t suggested for piggy consumption.

Guinea pigs are curious creatures with personalities that go from naturally timid to surprisingly bold.

A bolder, greedier piggy might be willing to nibble on about anything that is placed in front of them.

Guinea pigs have even been known to chew on clothing fibers and rugs when they are exploring in floor time.

Just because a guinea pig is willing to take a nibble on something doesn’t mean that they enjoy the taste or that eating it is good for their health.

This is why pet owners need to be aware of things that may enter their guinea pig habitats that are adverse to a healthy piggy lifestyle.

If you are worried that your guinea pigs’ constantly growing teeth aren’t getting enough chewing action, then don’t worry!

Interesting READ  How To Make A Guinea Pig Gain Weight? (the healthy way!)

There are plenty of things guinea pigs can chew to wear down their teeth that don’t include the dangers of pine needles.

The best way to wear down your piggies’ teeth is also the most convenient way.

By having a continuous flow of timothy hay in your guinea pig cage, you can make sure that they are always munching on something safe for their mouths and hard enough to keep their teeth short over time.

Guinea pigs will naturally wear their teeth down with a diet of hay, and crunchy vegetable treats like carrots and sweet potatoes.

If their teeth still seem like they’re growing a bit too fast, guinea pigs can chew a wide variety of wood sticks made of options like applewood and cherrywood.

These selections are commonly available in pet stores, so don’t fret if you’re worried about finding them!

If your guinea pig’s teeth still seem abnormally long or interfere with their ability to eat after taking these steps, contact your veterinarian to learn about other options.

What Do I Do if My Guinea Pig Has Eaten Pine Needles?

If you suspect that your guinea pig has eaten pine needles, quickly try to gauge the quantity that they may have consumed.

While it is not entirely certain that pine needles are toxic to guinea pigs, you should contact your vet if you suspect that they may have eaten more than a few bites.

If possible, gently remove any pine needles that they currently have stuffed in their mouths and try to check for any injuries that may have occurred.

If you have caught your naughty piggy early in their pine needle-eating expedition, then monitor your piggy over the next couple of days.

Ensure that they are regularly eating and drinking to prove that they haven’t accidentally acquired any cuts in their mouths or throats that may discourage them from eating.

As well as monitoring what your guinea pig consumes, monitor the quality of the fecal matter they expel over the coming days.

Guinea pigs should have long, rounded, dark poos of solid consistency. Make sure to contact your exotic veterinarian if you notice any significant changes to their bowel movements.

Guinea pigs with diarrhea should always be observed with caution because they can lose weight tremendously fast.

Keeping a scale for your guinea pig is the fastest way to monitor their weight to best catch any weight loss when they are feeling unwell.

Talk with your vet and weigh your guinea pig often to best determine what your piggy’s average healthy weight should be.

Knowing their healthy weight, which can vary from piggy to piggy, can mean easier detection of illness.

Guinea pigs are not recommended to come in contact with a wide variety of pine products, including pine needles. The leftovers of your Christmas tree are not meant for your piggies.

Since pine needles are dangerous and lack nutrition, they should permanently be excluded from your pets’ diets.

What to Feed Guinea Pigs When Out of Food