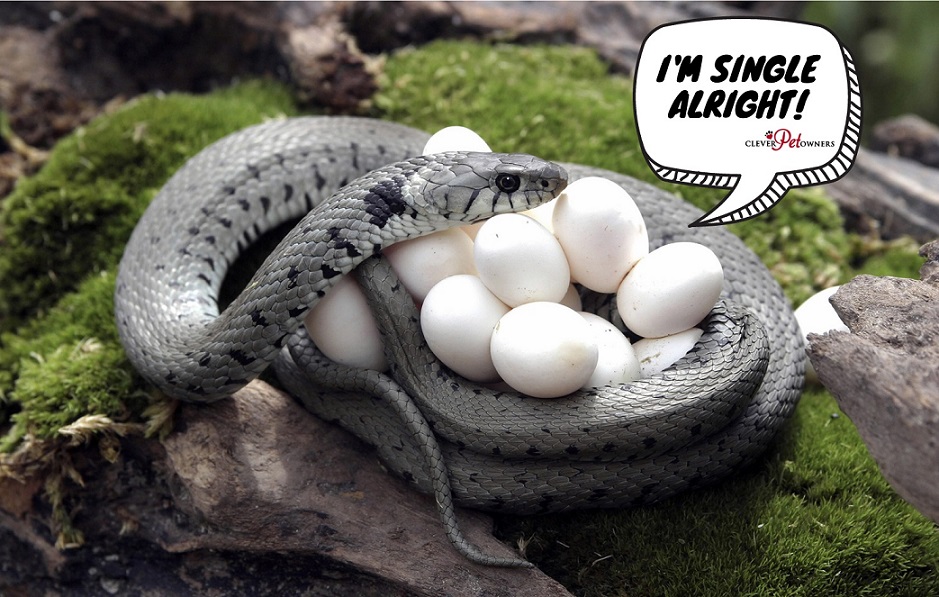 Some snake owners may be surprised to find that their female snake that is housed alone has suddenly laid a clutch of eggs! However, there is no need for alarm as this is totally natural behavior.

Female snakes that have not been bred can sometimes lay eggs, but these will usually be infertile and are commonly referred to as slugs.

In rarer cases, females can also lay fertilized eggs without a male’s help.

To learn more about how this can occur, what kinds of snakes this can happen to, and what you can do with an unanticipated clutch of infertile or fertile eggs, continue reading.

Why Female Snakes Can Sometimes Lay Eggs Without a Male

More than 70% of all snake species are oviparous, meaning that their ovulation cycles involve creating and eventually laying eggs.

Only a small number of snakes are viviparous. Species like boa constrictors, garter snakes, and most pit vipers will give birth to live young, so you will not have to worry about finding unexpected eggs from these reptiles.

However, for the oviparous species, there is always the possibility that a female may lay unfertilized eggs even if she has never had contact with a male. This is simply due to the processes involved in the oviparous life cycle.

Most of the common pet snakes like pythons and colubrids have regular ovulation cycles that involve the creation of eggs inside the body.

Typically, after mating, the eggs that oviparous snakes have already produced will soon contain growing offspring. These young will not be properly developed after leaving the parent snake’s body, and they will have to remain inside the eggs for some time while they continue growing.

Unlike species that give birth, egg-laying species will require their young to live off the nourishment that the egg provides until they are ready to hatch.

Long before this fertilization occurs, however, oviparous snakes will need to house their eggs inside the body until they are ready to grow into embryos upon contact with sperm.

Nonetheless, this process is not always perfect. Females may suddenly decide to release the snake eggs that they formed through ovulation even if they have not been fertilized yet.

We now know that sometimes, female oviparous snakes will lay eggs without ever having contact with a male. As you can probably surmise, this usually leads to a nest of slug eggs.

While this is not necessarily a common occurrence, this phenomenon can happen for many reasons including natural hormonal changes, stress, or temperature shifts.

Any of these alterations can induce hormones that trick the snake’s reproductive system into thinking that the eggs have been fertilized by a male. The eggs are then pushed out of the uterus.

While many snakes typically do not release eggs until a male has fertilized them, any oviparous snake can pass a clutch of these non-viable eggs. However, some species are much more likely to do this than others.

Corn snakes, gopher snakes, and other colubrid species are some of the more common contenders for this behavior.

In rare instances, snakes like ball pythons can also lay clutches without help from a male.

While finding a clutch from a female that has not been bred can be alarming, these eggs will typically not be housing an embryo. However, there is a slight chance that the eggs could contain a live fetus.

Why Eggs Can be Fertilized Without a Male

As you may have guessed by now, female snakes may be able to lay fertile eggs without being bred with a male, but this does not happen often.

There are two main routes by which this event can occur, and both may be equally surprising.

Some Snakes Can Store Sperm

In addition, snakes like ball pythons have been known to hold on to sperm from previous matings to fertilize their eggs after months or even years!

A change in the female snake’s environment or hormonal shifts may induce her to suddenly release the sperm she’s carrying so she may fertilize the eggs with it.

In this case, while the offspring will appear to have come about spontaneously, they will have been created by two parents as expected with typical sexual reproduction.

If you find that your female snake has laid a clutch of eggs that contain living offspring, this is more likely to be the case rather than spontaneous cloning.

In extremely rare cases, many female reptiles have been known to suddenly produce offspring without the help of a male’s sperm. This is especially helpful to snakes in the wild if females cannot find a mate, but it sometimes happens even when males are present.

This form of asexual reproduction only occurs in extremely rare cases, commonly known as “parthenogenesis”. This has been observed in several snake species, including anacondas, vipers, water snakes, and ball pythons.

In parthenogenesis, the baby snakes will essentially be partial genetic copies of the parent female and will have no DNA from a parent male. This also means that the offspring will be female just as the mother is, since there is no male chromosome.

Many of the documented cases of self-fertilization or parthenogenesis in snakes occur with older individuals.

Snakes that are housed away from male company for an extended period may feel the need to produce offspring independently.

Saving sperm to use later will only be viable for a certain number of years. As such, older snakes might then opt to reproduce asexually via parthenogenesis as a last-ditch effort to pass on their genetics.

What to Do with Unexpected Eggs

If you find that your lone-housed female snake has laid a batch of eggs that you were not anticipating, you might be at a loss of what to do.

Interesting READ  How Do Snakes Care For Their Eggs And Young?

Fear not, for there are several things you can do with unwanted eggs.

To start, you need to check whether the eggs are fertile or infertile just to be safe.

Gently hold the eggs against a small flashlight to see if the eggs are fertile.

When held against the flashlight, infertile eggs will look empty, and the insides will look to be a warm yellow color.

On the other hand, Fertile eggs will appear more reddish inside, and there will be visible veins and an embryo.

How to Handle the Eggs

Infertile eggs can simply be discarded, as they will begin to rot in a few days since they do not contain anything living.

However, non-viable eggs can also be fed as a treat to other reptiles like kingsnakes, hognose snakes, or monitor lizards.

On the other hand, in the unlikely event that you find fertile eggs, these can be placed in a substrate-filled Tupperware bin and incubated until they are ready to hatch.

If you are unable to care for the offspring that would come about from fertile eggs, you can visit a vet to have the eggs humanely disposed of.

What to Do After a Snake Lays Eggs

If your female snake has just laid eggs that you were not expecting, you may now be dealing with a protective or suddenly aggressive snake.

She may feel like she needs to guard her clutch, as she will not know that they may be empty of embryos.

It is best to remove the eggs as quickly as possible and deep clean the enclosure. Afterwards, you should change the substrate out to remove any remaining scent of eggs.

Providing a meal soon after the female lays a clutch may also be recommended, as her system will have used up lots of calcium in the process of creating the eggs.

This supply will need to be replenished quickly to avoid serious bone-related health issues. As such, your snake may also need to be given a vitamin supplement over the next few weeks to make sure she does not stay calcium-deficient for long.

As we have discussed, oviparous snakes are some of the few animals that can lay eggs without help from males.

Snake owners worried about obtaining new additions to their snake families will be relieved to know that these eggs will almost always be non-viable.

Nonetheless, as strange as it is, there are sometimes breakthrough cases where an unbred snake can fertilize her own eggs.

However, even if the female has laid a clutch without a father, there is no need to panic. While it is exceptionally rare, this is a completely natural adaptation that just makes snakes even more unique and intriguing.

In either case, however, the eggs need to be taken out and dealt with swiftly before they begin to deteriorate. In addition, the female snake will need special care to help her recuperate regardless of whether she could pass viable offspring.