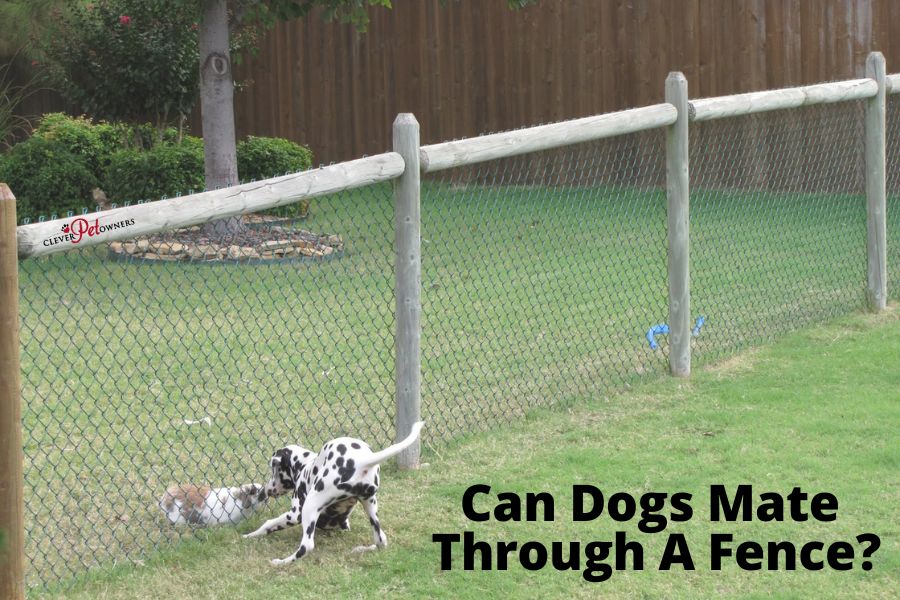 One of the challenges of being a dog owner is worrying about your dog’s reproductive activities, especially when your dog’s heat period is approaching.

While you may rely on your fence to keep your dog away from potential mating partners, it’s a wonder if fencing is enough protection.

Dogs in heat or male dogs that have sensed that your dog is in heat may not be held back by a fence, especially if they are strong-willed.

Hence, to avoid puppy litters, you may have to consider other methods to prevent your dog from mating through the fence. Read on to find out more!

Contents
I) Understanding dogs in heat
II) How to prevent a dog from mating through a fence? (5 tips)
III) Unsupervised mating—the disadvantages
IV) Can I use a dog diaper to prevent mating?
V) How can I calm a dog during heat?
VI) Final thoughts

The period where your female dog experiences some reproductive changes that allow her to be fertile is called the “heat” period. Your dog can easily get pregnant by mating with a male dog when she is in heat.

The heat period is sensitive and requires utmost patience and care towards your dog (male or female).

Male dogs can tell when a female one is in heat. Female dogs release some special smell when in heat, and male dogs can sense it from about three miles away.

This could lead to changes in the male dog as they may become more aggressive with the focus on mating with the female dog.

How to prevent a dog from mating through a fence? (5 tips)

While fencing remains a great idea for keeping your dog secluded, fences do not completely stop determined dogs from getting together to mate.

Hence, here are some adjustments you can make to prevent unplanned pregnancies.

Both male and female dogs can be prevented from mating by spaying or neutering them, depending on the gender of your dog.

Spaying is a technique for female dogs where the ovaries and the uterus are removed.

Carrying on with this procedure would mean that estrogen production would cease, and an end would come to your dog’s heat cycle and also the unique smell it gives off that attracts male dogs.

Neutering is a procedure that male dogs undergo. It involves the removal of the testicles and cutting off blood supply to the spermatic cord.

This will then reduce your dog’s sex drive and other behaviors related to the increased production of reproductive hormones.

Spaying and neutering make both male and female dogs infertile and is an effective method to prevent your dog from mating.

Also, ensure that only qualified veterinary doctors carry out these processes to avoid post-surgery complications.

You can use certain chemicals to help mask this smell; an example of these harmless chemicals is chlorophyll which you can purchase from health or pet stores.

You can put this in your dog’s food in the morning and evening; other sprays are available at various stores to mask this odor.

You can also use chemicals for your male dog to prevent them from getting agitated because a female on heat is around the neighborhood.

Lust buster is a product that is highly effective for this function. Other safe chemicals containing peppermint can also be used.

One step you can take towards preventing yourself from becoming a grandparent too early is changing your fence if you believe it is not enough to keep two dogs separated.

Fences with chain links are a no-no as they provide room for mating; you can then decide to block off all the spaces in the fence by using privacy slats or making the fence with less space for mating.

Another method is to consider double fencing, which would help keep dogs apart. You can also use electric fences or concrete walls.

Use Kennels to keep in a confined space

Another way to prevent your dogs from mating through the fence is to use kennels, especially if they have to be outside.

Kennels help to keep your dog in one place if you do not have the time to supervise them.

If your female dog has never been spayed, you would have to pay closer attention to her.

You would also need to track her heat cycle so you can easily detect when she is in heat and then take adequate measures towards keeping her away from male dogs.

Your supervision will also be needed to help keep her calm, as this period would cause an increase in the production of certain hormones that could cause a change in her behaviors.

Male dogs who have not been neutered also need more supervision, so they do not go all crazy when a dog in heat is in the vicinity.

Your dog may not realize this, but that’s why you are the parent: to help make the tough call.

There are several reasons why your dog mating through a fence or without your supervision is a terrible idea; this guide helps to highlight some of these reasons.

Certain health conditions like reproductive system infections or other transmittable diseases are usually tested to prevent the spread during mating.

However, when dogs mate without supervision or your “consent,” they may get infected by the other dog.

Humans take precautions to avoid unplanned pregnancies. What is the use of getting pregnant when there are no resources to help care for the baby?

This can be said about dogs, too, especially if yours is a female dog; you would want to avoid having your dog mate with a male dog when you are not ready to be a grandparent or do not have the resources to care for a pregnant dog.

Aside from being a financial risk, puppy litters also pose a social problem, as many dog shelters are filled up with only a few spaces left to cater to more litters.

Genetic defects can be hereditary; some of these include eye diseases, allergies, heart diseases, and autoimmune diseases.

All of these cannot be known if mating is unsupervised, and this could lead to you being stuck with puppies with these hereditary conditions, which may require them to be on medications for the rest of their lives.

Proper mating of dogs would involve testing each dog for these genetic conditions to ensure they are not passed onto the offspring.

When dogs mate, either or both of these dogs may get injured; injuries are mostly caused by a “copulatory tie,” which involves the male and the female being locked together.

When this happens, it is important that there are no forced separations as this could lead to injury.

Hence, your supervision is to help ensure that both dogs are calm and do not try to wriggle out of their position.

Some other times, injuries are caused when the dogs have an altercation; by being present, you could help end it by spraying water or making a loud noise to stop them.

Can I use a dog diaper to prevent mating?

Britches or female dog diapers can help keep your dog from mating through the fence or any other form of unsupervised mating.

It is safe to use diapers for your dog, as long as they do not react to it. However, using diapers still requires your supervision, as determined dogs can always find a way out of a diaper.

How can I calm a dog during heat?

Both male and female dogs experience behavioral changes when a female dog is in heat.

The female dog could become too friendly, do a little more roaming as she tries to find a potential mating partner, or be seen mounting and humping a little more often.

To help her sort through these feelings, you should try to keep her entertained, happy, and occupied; you can play games with her or give her some treats.

Meanwhile, male dogs can be seen going a little crazy once their nose smells that there is a dog on heat.

To help keep them calm, you would have to keep them away from other male dogs and away from the female dog and her scent—you can use a kennel until the period is over.

Keeping dogs that are sexually developed could become a huge task, especially when you do not have plans of owning puppies.

The fact remains that dogs can go through any barrier, including fences, as long as they have the advantage of visibility and smell.

Hence, to help avoid the burden of caring for a pregnant dog, prevent puppy litters in your home, and ensure that your dog remains healthy.

You might have to take additional measures to block your dogs’ desire to mate. You can do this by spaying or neutering, changing the fence, or using chlorophyll to mask the smell of a dog in heat.

Why Does My Dog Smell Weird After Getting Neutered?

How To Stop A Dog From Urinating In A Certain Spot Inside? (5 tips!)