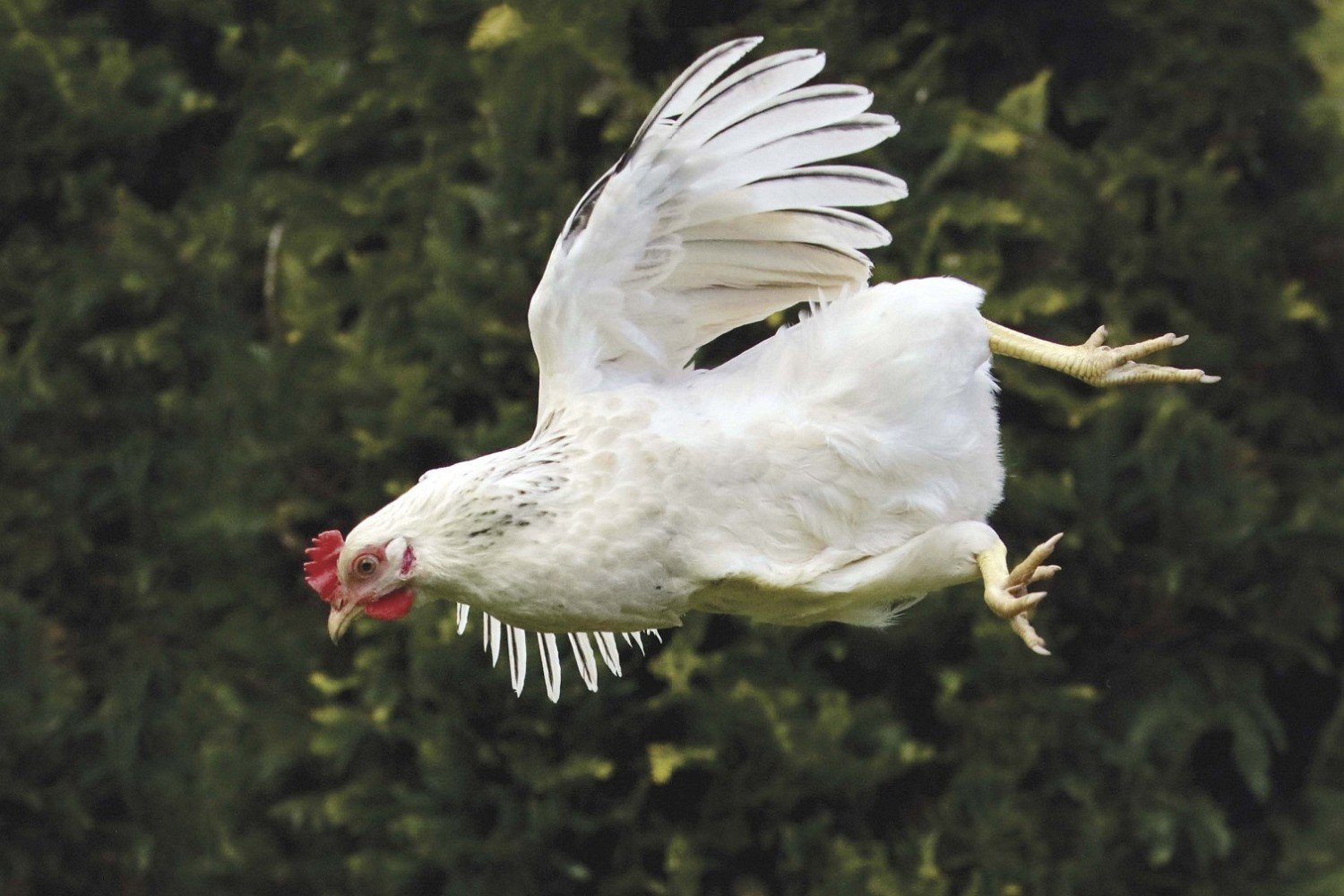 This is the most natural question you will run into when building fences for your chicken.

Whether your chickens will fly over a fence is dependent on a few factors.

Most chicken breeds have no problems flying over a 4 feet fence, while the flier breeds like Leghorn, Redcap, Ameraucana, and Hamburg can even fly over a 6 feet fence.

There are of course exceptions to this, and in this article we will provide you the details as to which are the breeds that can fly over tall fences, and how you can prevent from happening.

Which Chicken Breeds Can Fly

Lighter breeds tend to use vertical bursts of flight, while heavier ones have a hard time getting off the ground. Despite what most people assume, the intellect of chickens can provide insight as to why they may hop a fence.

Like most birds, chickens curiously view the world and little things in it. Colorful or reflective items grab their interest, and they will peck at it for inspection. Usually to decide if it is worth eating.

In addition to instinctive curiosity, chickens will fly over a fence to escape a conceived predator. Whether that’s an inanimate object moving in the wind, an actual threatening animal, or an aggressive member of their own flock.

Smaller chickens that can fly includes Mediterranean breeds such as Catalanas and Anconas, and other more familiar types such as Cochins, Brahmas, Plymouth Rock, Welsummers, and Rhode Island Reds.

An exception to the smaller breeds that fly are silkies. The soft, fluffy, chick down-like feathers of a silkie cause difficulty for them to capture wind in their wings and lift.

Lastly, the personalities of some breeds seem to enjoy flight and observing the world from up high more than others. Owners who let their flock free-range note this enjoyment.

Bantans are especially curious and like to hang out in trees. Their assertive nature bodes extra curiosity and more likely to go visit neighbors or check out some plants you just placed in a newly tilled area.

When it comes to hopping railings, larger breeds often can’t manage the upward shot required. Orpingtons, Wyandottes, Cornish, and Langshans may be hesitant to try, preferring to look for paths via land instead.

They may scratch holes into the ground or run along fence lines before attempting to use their wings.

While being curious tends to make chickens fly over obstacles like fences, they may also be trying to get away from each other.

What Makes Chickens Want To Fly Over The Fence

Before we talk about how to prevent it from happening, we should first understand the root causes of why your chickens might be flying out.

Sometimes chickens might get bored when they have been staying put at the same place for a long time. This may cause them to want to move around whether just to get some fresh air, or to see what is happening at the other side of the fence.

However, usually chickens will not really fly away from you, but rather just taking a scroll outside their home.

Bullied By Other Chickens

Henhouse hierarchy may be another reason chickens fly over enclosures and find themselves in an off-limits area. While food, water, and dusting spots may be the main reasons chickens have scuffles, chicken experts suspect that subgroups of larger flocks or a single, bullied chicken might also fly over a fence to avoid a tormentor or to stay with others in the flock they feel safe around.

This may happen when an owner introduces new hens or when chicks have gotten to their teenage stage and are still trying to figure out the pecking order. Curiosity and the social structure are both likely reasons for chickens to fly over a fence, but they might also be avoiding a predator.

Flying Away From Predators

Predators surround chickens, whether the domestic birds enjoy the freedom of acres of land or hang out in a snug suburban yard. Larger predators such as raccoons, coyotes, and even pet dogs startle and horrify chickens. Likewise, predators can come from the sky in the form of hawks or eagles.

While it is the responsibility of either the flock’s rooster or the biggest hen to stay alert for predators, the occasional hunter will get in their midst or get too close. Chickens naturally run or burst fly to get away from threats like these, and if a fence is in the way, they will fly over it.

Three Ways To Keep Chickens From Flying Over The Fence

If you’re concerned about your chickens getting out of their designated yard, there are several options to keep them safe. You can build your fence in such a way that they won’t attempt to go over it.

Though controversial, clipping your chicken’s wing feathers is another way you can keep them on the ground and the correct side of the fence. Lastly, we’ll look at some tips on keeping the peace in your flock to ensure the happiness of all of them.

Your fence should ideally be 6 feet tall to deter most chicken breeds from even trying to jump over.

The burst flight that allows chickens to get over a fence is a mostly vertical lift. If a chicken senses that they can’t make it over, they won’t even attempt it. This can be used to your advantage if you’re trying to keep them in a designated zone.

Two options can aid with this.

The first thing you can do tricks the eye a bit and has been used for both deer and chickens. Use stakes to set up a ring of wire or fishing line about two feet away from the fence you don’t want crossed.

Interesting READ  Why Are My Chicken’s Wings Drooping?

Place the stakes between fifty to sixty-five percent the height of your fence. Adding pieces of fabric or reflective ribbon that move in the wind will render it more visible and intimidating.

The fence will feel thicker and discourage your animals from attempting to clear it.

Another option for fencing is to create angles with your fencing rather than making it strictly erect. Recommendations to tip the topmost part of your fencing outward from the chicken yard. For a seven-foot fence, you’ll want around nineteen inches angled.

This not only discourages four-footed predators, but also makes your chickens less likely to attempt escape. In addition to these fencing options, manipulating the shape of your chickens’ wings might help keep them in safe areas.

The wing clipping debate has gone on for decades, since before animal cruelty was a thing. According to VCA Animal Hospital, chicken wing tip clipping is not intended to harm the animal or to cause them unable to get away from a real threat or move around normally.

It will keep them from going high or far enough to escape a fence, placing themselves where they aren’t wanted, or getting hurt by appliances or glass fixtures.

Be sure to ask your vet or view YouTube videos created by a veterinary clinic to make sure you’re confident before attempting to cut the wing feathers yourself. Primarily, the largest 4-5 outer wing feathers are trimmed about halfway off.

Never trim their mid-wing feathers or the smaller ones close to their bodies. This can manipulate their body temperature regulation and become life-threatening. Some people like to leave the outermost feather untrimmed for aesthetics, but smaller birds might still be able to fly with these still intact.

Whether you decide to trim your wings of your poultry or not, it might be worthwhile to create a settled environment for your flock. 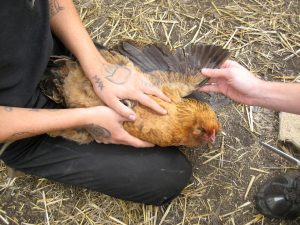 While chicken escapism is rarely about aggressive members of the flock, it can still happen. Ensure happy hens with a varied, stimulating, and spacious chicken area.

Chicken toys such as cabbage or melon heads on strings and hanging from the coop or fence or adding any type of natural material in a pile will keep your cluckers happy for a long time. Supplying multiple feeding and watering dishes, perches and nesting boxes for larger flocks may cut down on possessive attacks.

If your homeowner’s association or city limits allow roosters, it’s best to let him handle the group rather than letting a pecking order take place among the ladies. If you have a very large flock with lots of space to roam, you should probably have one rooster per group of 10-12 hens to make them feel secure.

All of these healthy flock recommendations should cut down on your chickens attempting to flee to areas they shouldn’t be.

To say that chickens can fly over fences holds some accuracy. Usually they will do it to check out something interesting, and occasionally they will be flapping away from predators or bullies in their flock.

When choosing breeds, you need to keep this in mind and be sure that you’ve arranged safety in the forms you deem appropriate. After all, you’re the keeper of your own flock.

Why Does My Rooster Crow All Day? (9 Funniest Reasons)

Do Chickens Get Sad When Another Chicken Dies?