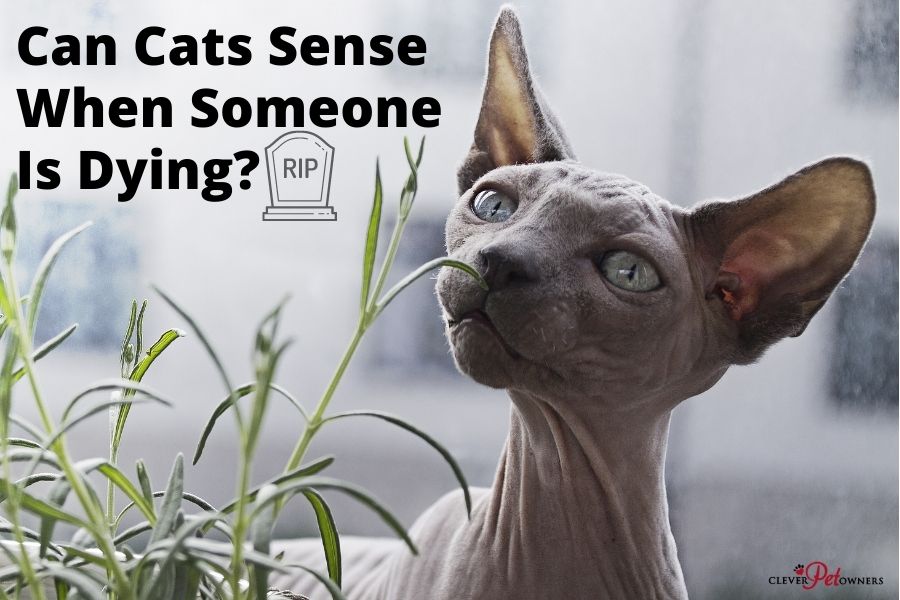 Is your cat acting extra clingy towards a loved one or another pet that is sick or dying? Are you wondering if your cat can sense when someone is dying?

Although there is no scientific proof yet, cats possess many unique abilities, including a keen sense of smell that could help them sense disease and death.

They are also empathetic creatures that emulate the behaviors of those they are close to.

There are many examples and beliefs about cats throughout history and some science behind their ability to sense death. Read on to find out more details!

Contents
A cat that could sense death
Why do people believe that cats can predict death?
Do cats know when they are going to die?
If a cat’s owner died, would they know he/she was gone?

A cat that could sense death

In a nursing home in Providence, Rhode Island, in the early 2000s, there was a notorious cat who could predict when patients began the final stages of their lives.

Oscar would spend more time in their rooms, lying on and comforting them.

The nurses began to notice and used his behaviors as a way to alert family and friends that their loved one was about to move on.

Scientists began to form theories as to how Oscar could predict death.

One suggestion is that Oscar could smell a change in the patient’s odor that humans could not detect, resulting in his affectionate behaviors.

Cats have highly sensitive noses that can even smell certain diseases the same way dogs do.

It is even possible that Oscar was in tune with how the nurses were behaving.

As the nurses reacted to their patients’ impending deaths, they probably acted differently. Oscar then picked up on these changes in behavior and reacted differently, too.

Oscar’s ability was not malicious. In fact, he seemed determined to make each patient’s passing more comfortable.

For centuries, cats have been associated with death. If Oscar could predict death, then all cats must possess this ability, right?

Why do people believe that cats can predict death?

Cats have been revered, feared, and seen as harbingers of death.

What has endured, however, is the idea cats possess extraordinary powers of perception, specifically the ability to sense death.

So, why have humans built up such a mystique about cats? This fascination has its origins in the cats’ long history with humans and religion.

Ancient Egyptians worshiped cats in temples as divine beings under the goddess of the home, Bastet (she was depicted with the head of a cat).

However, the ancients believed that Bastet and her cats protected her followers from disease.

They realized that cats could sense disease and death, and these felines used this power to guard rather than harm.

By the time cats made it to Greek mythology, cats were associated with Hecate, the goddess of witchcraft, the moon, and necromancy.

She was said to have a black cat as a familiar witch’s attendant.

As Christianity spread, the Church saw cats as a means of corruption. In early texts, the Pope described cats as the “incarnation of Satan.”

So, people were led to fear them. Cats became synonymous with witchcraft and developed a reputation for being magical.

Cats and the Plague

When the Dark Ages began, the Christian church began to persecute any woman seen taking care of cats as a witch.

Cats were even blamed for the Bubonic Plague. People began to kill them to stop the spread.

Ironically, the cat killing ended up making the Plague worse because cats kill rats, which were the true culprit of the Plague due to the infected fleas they carried.

If people hadn’t feared cats, these felines could have done what they do best–kill pests–and along with that, they could have done as the Egyptian goddess Bastet did for her followers–protect the people from a deadly disease resulting in millions of deaths.

The Western world believes cats can cause misfortune. You see this in our modern superstitions.

For example, some believe that if a cat jumps into a baby’s crib, it will suck the child’s life away. Others believe cats sink ships or can raise the dead.

The similarity in all three of these superstitions is death. Both modern and ancient people agree that cats have some power over death.

Yet, in modern society, we don’t necessarily believe they are magical–but it seems likely cats do possess the ability to sense when someone is dying.

For example, the cats who inspired the superstitions about babies could have jumped into the bed of a baby who was about to die.

The parent may have seen this and thought the cat was causing the death rather than trying to protect the child or alert the parent.

The same could be said of the superstition about cats sinking ships. A cat could’ve been seen near a ship that later sank, resulting in the deaths of many onboard.

Perhaps the cat, long associated with death, has an innate sense that lets them know where death will happen.

This all seems a little spooky. However, cats do have many skills that could be misinterpreted as magical to the untrained eye.

Cats can also see well in the dark. In fact, cats have an extra layer on their eyes that reflects light at night, which probably adds to cats’ devilish aura.

Cats have an acute sense of smell to hunt prey. They can tell the difference between foods just by getting a whiff, which may be linked to how Oscar was able to sense death at the nursing home.

In order to pick the most suitable prey, cats would need a special sense of death and disease. Dying prey would be easier to catch.

Cats are also super flexible and muscular. Cats can fit into small spots using their whiskers as an extra sense of touch.

They even measure openings with these whiskers before determining whether or not they should go into a tight space.

Moving in and out of tight places gives cats the appearance of disappearing, probably adding to the rumors that cats practice magic.

Cats also mirror others’ emotions through their actions.

They even practice this empathy with other animals. If a dog is aggressive, the cat reacts in kind. If it is pleasant, the cat and dog can be friendly.

Interesting READ  Why Is My Cat Rolling In The Litterbox?

As with Oscar, this connection with humans helps the cat fit into the human world.

They become very tuned in to how we feel, leading to their ability to sense illness and death.

Cats have all of these impressive senses, so when humans see that paired with their already preconceived notions about cats—it makes sense that they see something that has superpowers.

Do cats know when they are going to die?

The next thing you may wonder is if cats have all of these superpowers, especially this power of perceiving death, do they know when they are going to die?

Cats often exhibit changes in mood, appetite, and appearance when they are nearing the end of their life, paying attention to these signs may help you know when your cat’s life is about to end.

If your cat is normally standoffish, it may be alarming when they suddenly become clingy.

On the other hand, it is also concerning if an affectionate cat suddenly becomes withdrawn or isolates itself. Both of these changes can indicate that your cat is not feeling well.

Make sure to get the cat checked out by a professional if their behaviors change for more than a few days at a time.

Cats can be moody sometimes, but if the new personality is becoming the norm, it may be time to check up on your pet.

Cats also show differences in appetite when they are ill. They may eat very little or refuse foods they normally love. Cats may also refuse to drink.

Another tell-tale sign of your cat being unwell is that their coat will become dingy, ragged, and shed.

This haggard appearance can be an indicator that your cat has stopped grooming itself.

Anytime your cat is acting odd, you should seek a veterinarian to evaluate your cat. The cat may be ill and can be treated. If he/she is old, these signs may just be aging.

However, these changed behaviors can also be signs that your cat is nearing the end of its life, so you can give your cat extra snuggles and make them comfortable.

If a cat’s owner died, would they know he/she was gone?

Cats create bonds with their owners and other pets, so the cat feels the absence when that person/animal is no longer there.

Cats do exhibit signs of mourning when someone they are attached to has died. They will have a sad demeanor, become clingy, and search around the habitat for the missing loved one.

Sometimes, cats can even cry out for their missing human. It is a pitiful sight to see a pet mourning.

Their relationship with us has been marked with mysticism– influencing how we view our pets today.

Our greatest example is Oscar, the cat who could predict death.

Whether Oscar could sense death because of his keen sense of smell or his innate empathy for the humans around him, he is an example of cats’ great power in our lives.

Can Cats See All 9 Dimensions?

Can Cats be Obsessed with Their Owner? 9 Signs to Take Note!

What Is The Youngest Age A Cat Can Get Pregnant?

Why Is My Cat Rolling In The Litterbox?