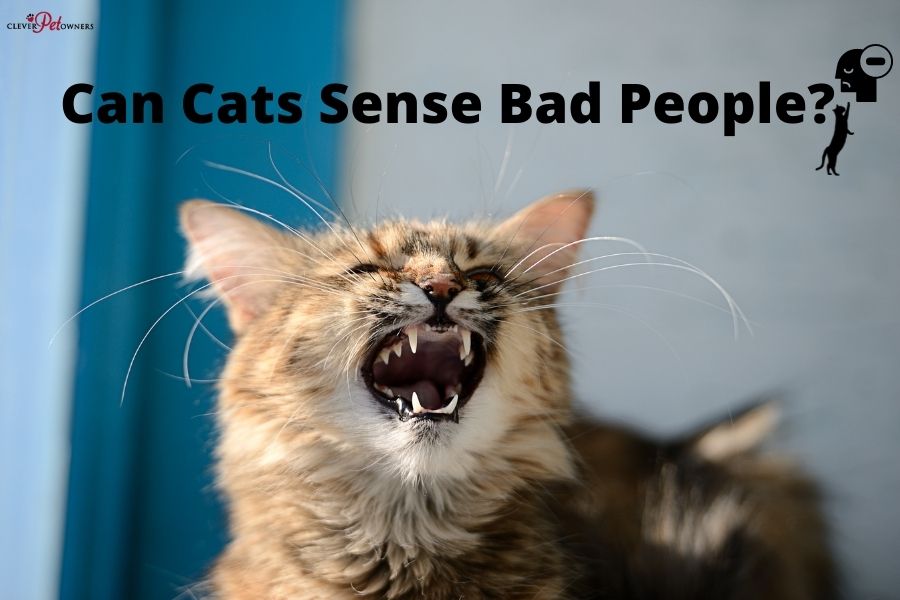 Have you ever wondered why your feline acts a certain way when someone comes around?

Do they act defensive or aggressive when someone new or even close to you comes around? Is this because cats have a sixth sense? Is it because they can sense the evil in a person?

In this article, we go over all of these questions and more. By the end, you’ll be able to answer the question: Can cats sense bad people?

Contents
I) Can cats sense evil in a person?
II) How do cats use their detecting abilities? (5 ways!)
III) Do cats have a 6th sense?
IV) Cats’ reaction to “bad people”
V) Why do cats dislike certain people?
VI) Final thoughts

Can cats sense evil in a person?

The answer is yes. Cats can definitely sense the evil in a person. They can even feel a level of vibration that we humans cannot.

It has been known for a long time that cats are good judges of character. Cats can differentiate good and evil in people and tend to have an excellent judgment of characters and emotions in humans.

Although many believe the answer is yes, some would disagree.

This is because, the concepts of good and evil are human concepts that don’t have anything to do with the natural or animal world. Based on this fact, many would argue that cats can’t sense the evil in a person.

Later in the article, we will examine how cats use their senses to sense the bad in people. Once you’re done reading this article, you may then decide which side are you with.

How do cats use their detecting abilities? (5 ways!)

A cat’s sense of smell comes second to its hearing ability. Compared to an average human, a feline’s nose has over two hundred million odor receptors, which is fourteen times the amount for a human.

Cats can identify a friend or foe by their smell, even before their arrival. Humans have an aroma unique to cats and can’t be covered up.

When a cat is handled against its wishes, it wants to keep all four paws on the ground.

This is a defense mechanism so they can access their claws, but their paw pads can also detect vibrations in the ground.

They do this by using the nerve endings in their feline paw pads, which can detect vibration frequency between 80 and 240 Hz.

By feeling the footsteps of the person, a cat may be able to sense his or her emotions and sometimes even any evil intent!

Did you know that cats can sense changes in the surrounding air?

Cats use their whiskers to aid them in the world around them, as they also react to a cat’s environment.

A cat may even detect a storm before you do because their whiskers can sense that change in the atmosphere.

Just like in a movie scene where the atmosphere changes when evil approaches, a cat is able to pick up this change in atmosphere much better than you!

A cat’s eyesight can vary from feline to feline, depending on whether it is an outdoor or indoor cat.

Contrary to popular belief, cats don’t have night vision. However, they can see, detect and define shapes that are unclear to human eyes (although they are just as lost in complete darkness!).

Hearing is a cat’s most prominent sense. In an article about cats being able to sense if something is going to happen, most indoor cats have hearing ranges between forty-eight and eighty-five thousand Hz.

For comparison, the average human can only hear between twenty and twenty-thousand Hz.

This means that cats tend to react to something they hear more often than a human; they can hear things that humans may not be able to.

For instance, if someone is secretly ransacking your bedroom, your cat will be more likely to hear it than you.

Do cats have a 6th sense?

Unfortunately, the answer is no.

There is no reason to believe that cats have a sixth sense, but the rest of their senses are above average compared to humans.

As discussed above, they have a phenomenal wheelhouse of senses such as sight, touch, hearing, and smell.

The only sense of felines that we as humans have better than felines is taste. A cat’s taste ability is actually less than that of a human.

Humans have over nine thousand taste buds, whereas cats only have a little over four hundred. This is why, believe it or not, cats can’t taste sweetness.

Although cats don’t have this sixth sense, they make many humans believe they do because of their remaining outstanding senses, like their ability to sense pain.

As discussed above, they have exceptional hearing and the ability to detect changes in the atmosphere, and sight, just to name a few.

When you consider that, it can absolutely seem like cats have a sixth sense, but again, sadly, they do not.

After a cat changes their body language towards a person they believe to be bad, it will start growling and hissing at a person.

As discussed, cats are great judges of behavior, emotion, and character. They can sense if a person is capable of doing evil or causing harm.

If your cat acts aggressively towards someone or shows this aggressive behavior, there is an excellent reason.

When you meet a cat for the first time, it is typical for them to be shy around you.

They don’t know you yet, but how you react to them, act around them, and the energy you carry with you can change their minds very quickly.

If a cat is shy around you, don’t give up hope yet. Be patient. Try to approach them and put your hand out so they can get familiar with your scent.

Some cats will always remain shy, as that is the way their breed is.

Aggression goes hand in hand with whether they see you as someone who is a threat. They will also be aggressive if they feel trapped and cornered somewhere.

If you are indeed a bad person and a cat finds this out, they will be in fully defensive mode. In this next section, we will talk about some body language cats show if that is the case.

Interesting READ  Why Does My Cat Poop Standing up? (6 Reasons!)

One of the first signs of a cat’s aggressive mode is the lowering of its tail and body and the display of its teeth.

A cat can have its ears back for many reasons, but the most common is that it can sense a terrible person or the evil in a person, so they go into defense mode immediately.

Why do cats dislike certain people?

If you have never been around a certain feline before, they will have trouble trusting you at first.

They have to get used to your behavior, smell, and what kind of vibes you give off.

They won’t gravitate toward you if you are aggressive, loud, or your personality doesn’t match theirs.

Cats are known to have exceptional observation skills, so they will be watching you closely.

You’ve shown them bad qualities in the past.

If you continuously do something your cat didn’t like, such as stepping on their tail, being rough with them, or forcing affection on them, they will remember or even hold a grudge.

It will be hard for them to trust you in the future if you have crossed these boundaries a cat has set.

As we talked about earlier in this article, cats will do a certain thing when they don’t like a person. They are also known to be very observant creatures.

They will study you closely to see if you still exhibit the same qualities they disliked in the past.

Cats are known for being moody creatures, and the person who can adapt the best to their mood swings will be the one to win the cat’s heart.

They also state that to have a better chance at forming a good relationship with your cat or someone else’s cat, you let them stay in control.

Just as we humans don’t like being made to do things we don’t want to, and we like others to respect our space and boundaries, cats are the same.

It’s because of their breed.

Many cat behaviorists say certain breeds only have room in their hearts for one individual.

Bengals, Himalayan, Siamese, and Norwegian Forest cats are examples of these cats who can only have one person in their hearts.

Once you’re that one person in a cat’s heart, they aren’t concerned or have a want to bond with anyone else.

Just because you aren’t your cat’s number, one pick doesn’t mean they don’t like or care about you.

If you try to be more relaxed about earning your cat’s attention versus being very aggressive about it, they may even change their mind about who their favorite person is.

Based on what you’ve read, do you think cats can sense bad people?

Like humans, not all cats are made the same, and some might react differently than others to you.

You might have done nothing wrong, and the feline has just had a rough past and isn’t very trustworthy. But the best thing you can do is be trustworthy, patient, and kind.

Will Cats Eat Cockroaches? (What you should do)

Is It Illegal For A Cat To Poop On Someone’s Lawn In The United States?

Why Does My Cat Lick His Food But Doesn’t Eat?

How Smart Is The Average House Cat?