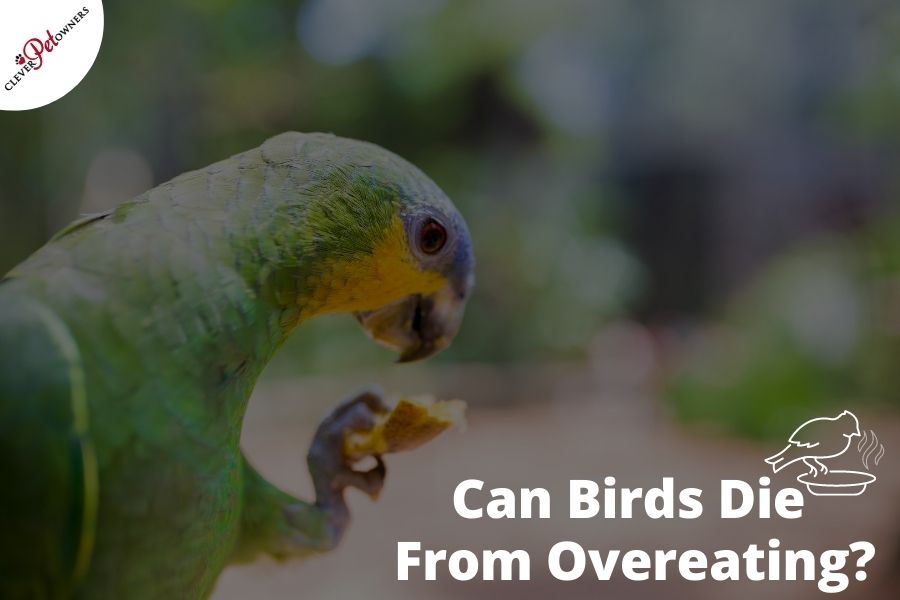 Have you ever seen your pet bird struggling to get around the cage and then hit with the fear it may die from overeating? Well, this is a common fear that may occur to many bird owners.

We love our pets, and one way to express that love is through feeding (besides, it is a basic necessity). As a result, sometimes, we can feed the bird more than we should.

In this article, you will learn about the consequences of this behavior and how that can eventually kill the bird.

Read on to figure out how to help an overweight bird and, more importantly, to prevent it from happening.

Contents
I) Can a bird die from overeating?
II) Consequences of an overeating bird
III) How to prevent your bird from eating too much?
IV) Helping an overweight bird?
V) Conclusion

Can a bird die from overeating?

The simple answer is that yes, a bird can die from overeating.

They aren’t going to blow up or anything. But in general, overeating can have dire consequences for a bird, one of them being death.

As we mentioned, a bird can die from overeating, but in the short term, you aren’t going to notice anything (at least not yet).

You won’t see any obvious signs your bird is eating more than they should, other than their food dish having a lot of empty seed kernels – more than there would usually be.

The main reason for the lack of signs at first is that a bird’s digestive system is amazingly fast.

Food goes in and out incredibly quickly. This shouldn’t be a surprise given the small size of the birds.

Also, consider how often birds poop. For smaller birds, they go about every 15 minutes. While bigger birds do go less often, it’s still more frequent than, say, a mammal will go.

As long as a bird poops regularly, there shouldn’t be a big problem with digestion in the short run.

If there is something you need to be concerned with, it’s the long-term effects of overeating. And that is because of the excess weight they are gaining.

All that extra weight will cause several health problems, resulting in lower life expectancy and leading to them dying.

A bird’s life span is shorter in the smaller birds, such as parakeets. They typically live about 10 years, so if they are overweight, this could be cut in half.

Even if you have a parrot that is known to live longer, if they are overweight, it could also cut it in half (sorry for the bad news!).

So, while you probably won’t see any signs in the beginning, the overeating will eventually catch up to your bird.

Consequences of an overeating bird

In the previous section, we discussed how the long-term effects of overeating are what you need to be more concerned with and might lead to your bird’s shortened lifespan.

This is because compared to the short-term side effects, the long-term health issues are a ton more devastating.

They can lead to the development of diseases like fatty liver disease, atherosclerosis, or arthritis, to just name a few.

Interesting READ  Should I Get A Second Budgie?

Fatty Liver Disease is one of the more concerning diseases an overeating bird can be at risk of.

This disease is exactly as it sounds. It causes fatty deposits to form around the liver. Symptoms to look out for are:

Unfortunately, this disease can only be diagnosed through x-rays and special liver tests, so it’s not something a vet could identify by just looking at the bird.

The treatment for this disease involves putting them on a low-fat diet, provided it is caught in time. If it isn’t, death is inevitable.

Atherosclerosis also causes fatty deposits, but rather than affecting the liver, it resides in major arteries. This certainly sounds concerning enough in just the name alone.

The symptoms are similar to fatty liver disease (discussed above), including lethargy, difficulty breathing, falling over, and/or fainting.

However, physical symptoms are rare, and by the time you figure out the bird has this disease, it will likely be too late.

Finally, another disease that may not be as life-threatening as the previous two but is just as devastating is arthritis.

Due to all the extra weight, a lot of pressure will be put on the bird’s joints.

Birds spend a lot of time on their feet (really all of it), so imagine how much pain that would cause them if they developed arthritis in their joints.

This is why trying to prevent your bird from overeating is so important.

How to prevent your bird from eating too much?

We’ve focused on the consequences, so let’s shift gears and focus on how you can prevent this from happening.

Obviously, the best way is to avoid overfeeding in the first place, but there is also more you can do.

Some ways to do this include increasing your bird’s activity and strategically placing dishes inside the cage.

The most obvious way to prevent your bird from overeating is to stop feeding it so much.

If you don’t give them a lot of extra food, this eliminates the possibility of their overeating.

Unsure of how much you should feed your bird? The amount of food you should give a bird depends on the size and breed.

As a general rule of thumb, they should not eat more than half of their body weight.

Besides not overfeeding them, another great way to help prevent your bird from gaining a lot of weight is to keep them active.

Let them out of the cage at least once every few days so they can fly around and stretch their wings.

Being in a cage doesn’t give them much of an opportunity to fly and exercise, so pet birds really can use the time out of the cage.

Another option is to buy many cage toys for your bird, especially ones that will keep them active. Shop around, and you will find a few that will get your bird’s blood pumping!

Finally, one last thing you can do to encourage your bird not to overeat is by placing the water and food dishes on opposite sides of the cage.

What can this do, you ask? Well, it makes them spend more energy fulfilling their basic needs. This will further encourage them to work for it and keep all that extra weight off.

Monitoring activity level is not the only thing you can do. Consider what may happen if your bird is already overweight.

Increasing activity and not overfeeding are great solutions when used hand-in-hand, but these can only help so much in the long run.

You need to also get them on a balanced diet that is just more than seeds. Throwing in some fruit and veggies is a great way to get your bird a balanced diet.

Many bird owners end up feeding their pet bird seed that is purchased from the local grocery or pet store. This isn’t the fault of the pet owner.

We usually purchase this type of food for our pets because it is convenient.

Don’t get the wrong idea, though – I’m not saying that you totally can’t feed them this type of bird seed! It’s perfectly fine, but it can’t be all you are feeding them because there is no way they will get all their nutrients from it.

The best way this can be done is by adding fresh food to their diets.

Adding fresh fruits and veggies to a bird’s diet is definitely going to help an overweight bird lose some weight or, at the very least, not gain any more.

Some good fruits and veggies you can give birds are:

Remember, there are also some foods to avoid. Avocados, iceberg lettuce, and celery stalks are something they shouldn’t touch.

It’s also essential to make sure the fruits and veggies are fresh. The frozen and canned ones just have too many preservatives in them.

They will actually end up making your bird unhealthier, which is the last thing you want when trying to make them less overweight.

If you are in any doubt, just contact your vet. They will advise you on what is the best course of action.

And there you have it, folks! You now know that your bird will not die of overeating right away, but in the long term, it can lead to dangerous illnesses that could take a bird’s life.

A balanced diet and exercise is the best way to avoid overfeeding your bird. If your bird is already overweight, the same thing applies.

Keep the bird active and make sure they are eating right. By doing this, your bird will have a good chance of living for its average life span, even beyond it, which can happen.

How Often Should I Bathe My Cockatiel?

How To Take Your Bird Outside

How to Identify A Cockatiel’s Gender? Male And Female Differences