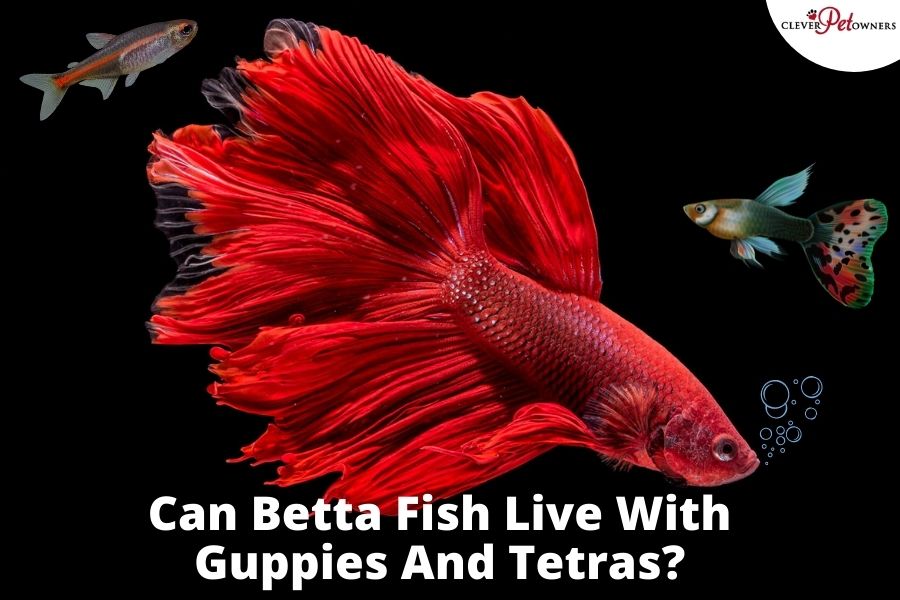 If you have a tank with a betta fish, it might seem a bit empty. With as much color as your betta fish may have, or as active as it is, there’s only so much space it can take up!

Sure, you can add snails or shrimp, but maybe you want something eye-catching. Perhaps you’re asking, can betta fish live with guppies and tetras?

The answer is yes! Betta fish can live with guppies and tetras. This comes with a few modifiers, of course; in some cases, it can be a bad idea.

Read on to see if it’s the right choice for your tank!

Can betta fish live with guppies?

If you’ve kept betta fish for a while, you’ll know that each and every betta fish is different. These fish have a lot of personalities, and some are just more aggressive or territorial than others.

Your betta fish’s attitude is the most crucial factor as to whether it can live with anything at all; if your betta is too aggressive, it’s a bad idea to keep it with anything.

While something like a snail can resist the aggression of a betta, a small, unarmored guppy or even a shrimp can become nothing more than a glorified snack for the wrong betta fish.

The second most crucial aspect is the size of your tank, which needs to fit the size requirements of every fish in the tank.

Guppies, with their pretty, flowing fins, will need plenty of room to run and hide from the betta fish.

Betta fish are known for fin-nipping and getting aggressive towards other fish with large, flashy fins- which is a good way to describe guppies.

To prevent this, look for female guppies with smaller fins. The smaller, duller female guppies are more likely to avoid the wrath of a betta fish while still being active in the tank.

Can betta fish live with Tetras?

In regards to the basics, like tank size and your betta’s personality, keeping tetras with bettas has the same guidelines as keeping guppies with bettas.

However, tetras can have a few individual quirks that make their care a bit different.

There are many different species of tetras available in the pet trade, and each one can be different- so it’s essential to consider what types of tetras you want.

One of the most common types of tetras, the neon tetra, is a great choice.

They can be less aggressive and fast enough to avoid unwanted attention from your betta fish, though their bright colors may make your betta angry.

The same goes for fish like ember tetras, though black neon tetras avoid this by virtue of their darker coloration.

If you’d like a tetra and are willing to not have their vivid coloration, black neon tetras are a great choice!

While bettas are notorious fin-nippers, they’re actually the ones you might have to look out for!

If you notice signs of aggression, it can be best to separate your fish or investigate if there’s an underlying problem.

Common issues of keeping bettas, guppies, and tetras together

As mentioned earlier, fin nipping can be a major issue in communal tanks with bettas, guppies, and tetras, ending up with your beautiful fish having torn, tattered fins that can lead to infection.

While fin nipping can mean some of your fish are just flat-out aggressive, especially in the case of your betta fish, there tends to be an underlying cause when tetras, or even guppies, start nipping fins.

Any tank with multiple fish can have this issue. Some fish just eat way more than they should.

Oftentimes, this won’t lead to any of your fish starving to death- but it is something you need to keep an eye on if you’d like the best life possible for your fish!

Live plants are beneficial to all inhabitants of a tank and can provide hiding places for bettas, guppies, and tetras alike.

Plants like java ferns and anubias have plenty of space to keep your tiny guppies safe from an aggressive betta or a betta safe from an angry school of tetras!

While it’s still a good idea to add harder hiding areas like caves, plants provide more shelter that’s simply harder to see through for other fish.

You don’t want to crowd your tank. Your fish need some space to swim after all, but areas of dense foliage can provide excellent hiding places, along with helping to keep up the water quality in your tank.

A planted aquarium is just plain healthier for all the fish involved, and anything that can provide both oxygen and shelter will be appreciated!

Something important to keep in mind is that your betta fish, like all betta fish, is probably very territorial. If it sees something coming into its territory, it’ll probably attack it!

If you’re adding other fish to a pre-established betta fish tank, that’ll likely happen, as the betta already sees the whole tank as its territory.

To avoid this, you have to make sure the betta fish recognizes where its territory actually is in the tank- or at least make sure it’s willing to share.

If you add tetras or guppies to the tank first, a betta fish is less likely to harass them as it will see the tank as their territory, not the betta’s.

Keep them in recommended school sizes.

If you have a group of female betta fish, you can attempt a sorority group, though this once again requires the bettas’ individual temperaments to be in sync.

With that in mind, bettas tend to be loners; guppies prefer to be in trios; and tetras like schools of ten or more fish. Though six is the recommended bare minimum for a tetra school.

Interesting READ  How Big Will A Shark Grow In A Fish Tank?

By sticking to these numbers, all of your fish will be happier.

Keep an eye on water quality.

Water quality is important in any tank, and increasing the number of fish in the tank can affect that.

More fish means more waste for the filter and clean-up crew to deal with, so you’ll have to perform maintenance more often to keep it clean- or get a bigger tank.

A cleanup crew, such as snails or shrimp, can help minimize this- though shrimp can become messy fish food, making the tank even dirtier.

How to stop food theft

Feed on different sides of the tank

If your guppies and tetras are stealing a betta’s food, or vice versa, you can simply feed them on different sides of the tank to stop food fights.

This will require a bit of training on your part, but it works particularly well if you’re feeding your fish different types of food.

Don’t be too alarmed if a single fish strays over to a betta’s side of the tank during feeding time- a betta fish can easily chase off a single tetra or guppy.

This may stress your betta fish out, so it’s best to use this sparingly, preferably while figuring out another solution.

The best option for this is a breeding net, as a regular aquarium net will restrict your betta fish more than necessary.

If you still have the cup your betta fish likely came in, using that and letting them float at the surface is a less-stressful way to separate your betta.

It also provides more space for the betta, so it can also eat while separated! Plus, a transparent cup can help the betta fish see its surroundings, helping it feel more comfortable.

If the fin-nipper in question is a tetra or a guppy, it could be that there aren’t enough fish in their school.

Schooling fish are social animals, and fin nipping can be a stress response to not having a large enough school.

For guppies, make sure that you have a multiple of three- three, six, nine, or whatever your tank size allows for so that they can group up into trios.

For tetras, make sure you have at least ten in a school- while six is the minimum recommended school size, negative behaviors can be best avoided starting at ten fish.

Male fish tend not to like each other in general, and this trend holds true with betta fish and guppies. A male guppy could see a betta fish as a rival and vice-versa.

Between guppies and betta fish, make sure there is one male between the two types of fish- preferably the betta, as a male guppy can harass female bettas, as well.

Lowering the temperature by a degree or two can calm fish down- but make sure you don’t lower it too much, or your fish can become lethargic or ill due to unfitting temperatures.

How Big Will A Shark Grow In A Fish Tank?