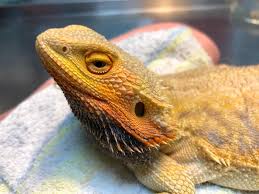 If you own a bearded dragon or are considering purchasing your very first one, then it is possible you have been struck with certain worries and questions regarding their health and your own health. Being a pet owner comes with its own interesting worries and curiosities.

We know how awful we feel when we get sick and we would hate to be the reason our beloved pet came down with an illness. While it is quite possible to catch any number of illnesses from our bearded dragons through fecal matter, a bite, or poor hygiene; is it possible for bearded dragons to get sick from humans?

The process of an animal catching any illness from a human is called reversed zoonosis and it is actually uncommon. Although there have been a few reported cases of reverse zoonosis, little is known about the possibility of passing illnesses to reptiles.

The idea is that if you are carrying a certain bacteria known for afflicting reptiles, more importantly bearded dragons, then it might be possible to pass an illness or a secondary infection to them. Common bacteria species that can be carried by and cause an array of diseases and illnesses in both humans and bearded dragons are the salmonella spp, aeromonas spp, campylobacter spp, and pseudomonas spp.

We will be discussing what diseases each of these can cause and what the difference will look like between human owner and pet bearded dragon.

Due to the fact that it is known for humans to catch an array of bacteria from bearded dragons that can cause severe illnesses and diseases, and so very little is known about the reversed aspect of humans passing anything on to their bearded dragons, it would be considered extremely necessary to utilize proper hygiene practices and skills. Any time before and after handling your bearded dragon you should be sure to properly wash your hands to decrease the possibility of spreading any bacteria or diseases between the two of you and/or any other member in your household or that you come in contact with.

To better understand the possibility of spreading certain bacteria to our bearded dragons, let’s examine the different bacteria that affect both humans and bearded dragons and the diseases that accompany them.

GIF
Contents
I) What Bacteria Have The Possibility Of Being Spread Between Humans And Bearded Dragons Through Zoonosis And Reversed Zoonosis?
II) What Does This All Mean And Not Mean For You And Your Bearded Dragon?
III) Final Thoughts:

What Bacteria Have The Possibility Of Being Spread Between Humans And Bearded Dragons Through Zoonosis And Reversed Zoonosis?

Your bearded dragon could be infected with salmonella and not show any symptoms and will continue to shed the bacteria continuously through their feces. It is highly suggested that you always wash your hands thoroughly after handling your bearded dragon or their fecal matter so as to not potentially contract salmonella.

While your bearded dragon may show no signs of the disease, the same could not be said for you if you were to contract this illness. Symptoms in humans range from fever to bloody stool and can get as serious as the possibility of death.

Interesting READ  Do Bearded Dragons Absorb Water Through Their Skin?

If you by chance have caught disease from elsewhere and are still handling your bearded dragon, one could assume that you could pass this on to them if you are not keeping your hands clean, especially after using the restroom. While it is unknown if you can pass salmonella to your bearded dragon, it is better to be safe than sorry.

Aeromonas and pseudomonas is a type of bacteria that is known to cause a series of infections and infectious diseases in humans, including gastrointestinal disease, wound infections, and necrotizing fasciitis. Aeromonas and/or pseudomonas could potentially cause a secondary infection in your bearded dragon if they are already experiencing an open wound or even ulcerative dermatitis (scale rot) and could exacerbate the infections they are already afflicted by.

Campylobacter is the bacteria that causes campylobacteriosis, a gastrointestinal disease with symptoms ranging from fever to abdominal pain/cramping and will usually resolve itself after a few days. Campylobacteriosis is better known as food-borne disease and is among the most common zoonotic diseases; however, there is an emerging possibility that this disease can be transferred from reptiles to humans and possibly vice versa. Without proper hand washing practices and handling techniques, cross species contamination of this bacteria could be quite possible.

What Does This All Mean And Not Mean For You And Your Bearded Dragon?

What It Does Mean:

Refraining from handling your bearded dragon while he or she has an illness or infection would also be a good idea so as to lower the chances of zoonosis and reversed zoonosis. Practicing proper husbandry could keep these chances even lower, such as providing a large enclosure and keeping it clean, having special cleaning supplies specifically for your bearded dragon’s enclosure and keeping them put away, bathe and/or soak your reptile in an appropriate tub dedicated to that purpose only and not your personal tub or sink, and researching the appropriate disinfectants and cleaners to use for cleaning your bearded dragon’s enclosure.

Do check out our helpful post to learn more about what to feed you sick bearded dragons.

What It Does Not Mean:

This does not mean that you are going to pass your common cold to your bearded dragon. The idea of reversed zoonosis requires the passing of a bacteria or disease that both species are known to carry.

As we have discussed, there is little evidence of reversed zoonosis when it comes to bearded dragons, but that does not necessarily completely rule out the possibility. Considering there are several bacteria that affect both humans and bearded dragons in a number of ways, it would make good practice to keep your hands washed thoroughly before and after handling your bearded dragon.

Unless you are inflicted with a disease or bacteria that are also known to bearded dragons, it should be completely fine for you to handle your bearded dragon; just remember to keep your hands clean. The health of you and your bearded dragon should be of the upmost importance if you are going to own a beardie and it all begins and ends with proper hygiene.

If you are ever unsure about the health of your bearded dragon, contact your local herp vet for any concerns or questions you may have.

Why Is My Baby Bearded Dragon So Aggressive?

How To Identify Bearded Dragon Gender?

What Do You Feed a Malnourished Bearded Dragon?