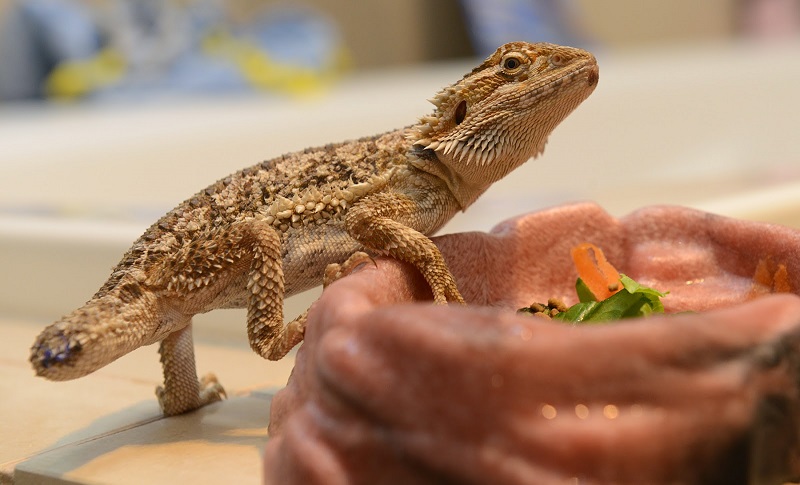 Bearded dragons do not drop their tails because, unlike other lizards that can, they do not need to drop them to escape predators. Instead, they use other methods to deal with predators.

A bearded dragon’s tail is used to protect themselves because they assert dominance by making themselves appear bigger. Losing part of their tails will make them appear weak and easy prey to other bearded dragons. Additionally, It can affect their balance and lead to other issues that affect their ability to survive.

It is also common for bearded dragons to lose their tails due to tail rot, which can be caused by a multitude of different factors.

Read on for more information on bearded dragon tails and why they are important, and the common ways they can still lose them.

They need them for balance.

You’ll find that your dragon may curl their tail while you are holding them or while they’re sitting on a branch. Their tail helps bearded dragons to stabilize themselves.

Without a tail, a bearded dragon would struggle to climb, balance, walk and run. This could prevent bearded dragons from escaping predators, finding food, and regulating their body temperatures.

They use their tails for communication.

Bearded dragons will often lift their tails up to communicate with us.

Examples of why they would raise their tails would be to convey when they are excited, alert, hunting, or trying to assert dominance.

They use their tails for mating.

Bearded dragons also use their tails for mating as they will intertwine them during the process. In addition, they use their tails to communicate to another dragon that they want to mate.

They use their tails for protection.

Bearded dragons show dominance by making themselves look more prominent, and their tails contribute to this. A dragon missing a tail makes them appear weaker. They are better off secluded because they are extremely territorial.

They use other defense mechanisms

Bearded dragons have other ways of defending themselves, such as puffing out their beard and raising their tails to appear bigger to deter other bearded dragons and predators.

Do bearded dragon tails grow back?

Can a bearded dragon live without its tail?

Yes, a bearded dragon can live without its tail, but its balance will be impaired for the rest of their lives. They may struggle to climb, run, and even walk.

Interesting READ  Why Do Bearded Dragons Close One Eye And Keep The Other Open?

This usually happens on the end of a dragon’s tail and will also eventually fall off on its own but could potentially keep spreading. Unfortunately, if left untreated, the infection may continue to spread throughout its body, and likely kill them.

Bearded dragons need a proper diet with proper nutrients, including calcium. Calcium affects their health, growing, shedding, and more. A calcium deficiency may result in metabolic bone disease in your bearded dragon and affect its ability to shed its skin properly, leading to pieces of dead skin stuck to your dragon’s tail or other areas.

Sometimes when a bearded dragon is shedding, the skin will get stuck on smaller limbs such as its toes, feet, and tail. If you notice your dragon having some issues shedding, you can give them a warm bath to help the process and hydrate them.

If you find that the shedding stops at the edge of their tails and or other parts of their body, contact your vet to make sure your dragon doesn’t end up with tail rot.

Oftentimes bearded dragons will become frustrated and develop stress marks when shedding, resulting in them chewing on excess skin that is bothering them. They could potentially hurt themselves by breaking the skin and opening themselves up to infections.

Sometimes stress can result in a bearded dragon biting off its own tail and can also lead to other health complications. Your bearded dragon could get stressed from not having a proper diet and housing or being near other bearded dragons or other pets.

When bearded dragons are stressed, you may find that they’re irritable, not eating, have a black or puffed up beard, or constantly running around the tank. Sometimes, owners may also find their bearded dragons scratching and digging at night in their enclosure.

Keeping two bearded dragons together will lead to stress and a fight for dominance, and that will likely lead to biting. They are independent creatures that are also very territorial which often leads to bloody injuries.

Fractures from getting crushed

A bearded dragon could also lose their tail from getting it stuck or stepped on. It’s essential to be aware of where your dragon is and how it could potentially hurt itself.

Be aware of your dragon’s personality and how they react to being out of the enclosure. If you find that they are excited and mischievous, keep them in a smaller and monitored space.

Baby bearded dragons are very fragile and are even more likely to injure themselves and lose their tails. Therefore it’s best to leave them in the enclosures until they get much bigger. You’ll likely have to adjust to your dragon’s needs and personality traits. Fortunately, bearded dragons do tend to calm down with age.

How can I prevent my bearded dragon from losing its tail?

Do not house them with other dragons.

Even as babies, bearded dragons will fight for dominance, and the weaker dragon(s) will end up fighting for its life both subtly and violently.

One dragon may be more dominant than the other(s) and lay on top of a more submissive dragon to take all of the heat. In addition, the lack of heat affects their overall health and ability to digest their food properly.

Interesting READ  What Should I Feed My Baby Bearded Dragon?

This weaker dragon will not receive the proper temperatures. When bearded dragons lay on top of the other(s), it is preventing them from getting enough light.

Therefore, even if the other dragon doesn’t end up losing part of its tail from physical fighting, the lack of nutrients raises the risk of your dragon’s tail rotting. So remember not to house two bearded dragon together especially male ones.

When picking up your dragon, do not grab its tail. Not only is a bearded dragon’s tail sensitive, and your dragon may not want you to touch it, but you can also fracture its tail.

If you have a child and decide to let them interact with your lizard, keep close supervision to prevent them from holding them incorrectly or dropping them.

Their dietary needs are affected by their size and age. Your bearded dragon will require a higher ratio of bugs to vegetables when they are babies, but that ratio will change as they grow and age.

In addition, you can sprinkle calcium on the insects before feeding them to your lizard. Furthermore, feeding your dragon the proper diet will help prevent future health issues, including tail rot.

Having a proper diet is not only beneficial to its tail, but also directly helps improving the lifespan of a bearded dragon.

Always make sure that your bearded dragon has an enclosure that is at least double their size in every direction to ensure that they can move around and regulate their temperature.

Additionally, make sure to regularly thoroughly clean and sanitize your beardie’s enclosure to prevent bacteria and parasites (bearded dragons are also highly susceptible to parasites). Doing this will help prevent stress in your bearded dragon and from getting an infection, especially if your dragon is injured in any way.

If you notice their tail turning dark, purple, or blue and not shedding properly, take them to the vet right away.

It is important to administer tail rot treatment early, and not taking them to the vet could lead to your dragon losing more of its tail or eventually dying due to an infection that spread from its tail to the rest of its body.

Proper lighting is essential for your bearded dragon’s health and wellbeing and will help prevent health problems that could lead to tail rot. You don’t want the enclosure to be too hot or too cold.

What to do when a bearded dragon’s tail falls off

If you notice your bearded dragon’s tail is or already has fallen off, take them to the vet right away as they could quickly develop an infection(s) that could potentially spread through their bodies and kill them.

Bearded dragons do not drop their tails in defense as many other lizard species do. This is because bearded dragons need their tails for balance, communication, and more. Their tails are essential for a healthy life. Without them, they will struggle to climb, run, and keep their balance.

Unfortunately, it is common for bearded dragons to get tail rot. Monitoring your dragon, proper diet, and giving them baths when they are shedding will ensure that you’re giving your dragon the best care and prevent further complications if an accident were to ever happen.

Why Do Bearded Dragons Close One Eye And Keep The Other Open?

Why is my bearded dragon turning black and not eating?