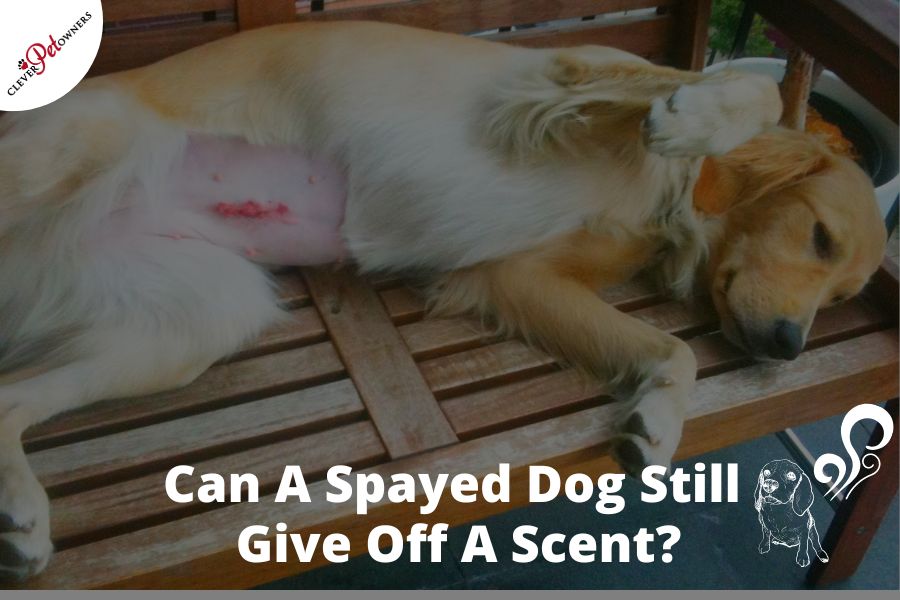 You’re a responsible pet owner who decided to spay your female dog, but you’ve noticed some insistent male suitors continue to sniff around her.

If you’re wondering if these dogs are still attracted by the scent of your pet, you do not need to worry.

Spayed dogs do not give off a reproductive scent because they can no longer produce the pheromone estrogen that makes them attractive to mates.

If they’re still attracting males, there may be environmental or medical reasons causing male dogs to sniff your pet.

Read on to learn how this important medical procedure can change how your dog smells to others.

Contents
I) How spaying affects the scent
II) Other scents that can still exist in a spayed dog
III) Why is my spayed dog still attracting males? (5 reasons)
IV) Final thoughts

How spaying affects the scent

Done effectively, spaying is the full removal of the reproductive organs.

It is a dramatic change to the body of a female dog, and it causes a change in the smell that other dogs notice (or rather, they stop noticing anything exciting).

A female dog’s ovaries, fallopian tubes, and uterus make up the reproductive system.

This system precipitates the heat cycle, switches on mating behaviors, and produces reproductive scents (more on this below).

The most common forms of spaying are ovariectomy and ovariohysterectomy.

The difference is that ovariectomy only removes the ovaries, while ovariohysterectomy removes both the uterus and ovaries.

The decision of which form of spaying varies by the veterinary clinic.

The ovaries produce estrogen, and an unspayed female dog in heat produces more of these hormones than at any other time in the reproductive cycle.

These are scented in vaginal discharge, urine, and remnants on the dog’s body.

A dog in heat will scent mark more and be more attracted to male dogs. She will also raise her tail more in order to spread her scent.

The actual smell can vary in strength, but many dog owners describe estrus smell as pungent and fishy.

You may notice this particular smell if you decide to spay your dog after she has experienced a heat cycle.

Whether the spaying procedure is an ovariohysterectomy or ovariectomy, it removes the ability to give off a reproductive scent when the ovaries are removed.

Other scents that can still exist in a spayed dog

Dogs use scent to relay all kinds of information, including age, sex, health, and even their emotions.

Even if your dog is not communicating her availability to reproduce anymore, she may be spreading her unique smell through other types of scents.

You’ve likely noticed your dog sniffing other dogs’ rear ends when they first meet. This area of dogs’ bodies is the origin of their unique, individualized smell.

Interesting READ  Why Does my Australian Shepherd Follow Me Everywhere?

Humans cannot distinguish the smell of pheromones from that of poop, but other dogs will be able to smell a wealth of information.

Most dogs, regardless of spaying or neutering status, will mark their territory to tell a neighborhood their sex, age, and other information.

Marking can happen when a dog is in a new territory, when exposed to new smells, or as a coping mechanism when anxious.

Although your spayed dog no longer produces sex pheromones that are passed into urine, the biochemical signals they leave on trees and fenceposts will still convey information.

Stinky breath can be an obvious sign of periodontal disease, but the breath that has little to no smell can still tell other dogs information about sex, age, and health.

Pheromones are also emitted in the lip or labial area. You may notice dogs at the park sniffing around this facial area if another is already sniffing the dog’s rear end.

Dogs also possess glands between their toes that are capable of releasing pheromones.

When a dog scratches at the ground after they poop or pee, they are taking an extra step to mark their territory when other dogs smell around.

The smell from their paws is believed to come from bacterial communities on the skin.

If you’ve ever sniffed your dog’s paws, you might have noticed a distinct “corn chip” smell that comes from localized bacteria.

Why is my spayed dog still attracting males? (5 reasons)

If you notice these dogs are still attracted to your own, there are other reasons why they continue to sniff around.

A recent spaying procedure may leave a lingering pheromone scent for up to three weeks before it fades.

This corresponds with the normal heat cycle of 3-4 weeks if your dog is being spayed at the beginning of this season.

Your dog may also be attracting mates because pheromones are still being produced by ovarian material left over in her body after spaying; this is also known as ovarian remnant syndrome.

It can also be caused by a small piece of tissue that has broken off the ovary and this small tissue can produce hormones with its own blood supply.

A spayed dog with this syndrome will exhibit signs of heat, including bloody discharge and swelling of the vaginal area.

She may also show mating behavior such as an attempt to escape your yard to find potential mates and increased attraction to male dogs.

This syndrome can be detected at a veterinary clinic by several different methods.

A swab taken from your dog’s vagina can be examined for cornified cells, or an ultrasound to visualize ovarian tissue can be conducted.

The vet may also administer a synthetic hormone and draw blood two hours later in order to detect estradiol, a primary form of estrogen.

The veterinarian will then draw blood 7-14 days later to detect progesterone, a sex hormone involved in the heat cycle.

This longer time period is needed for detection because progesterone levels can vary throughout the heat cycle.

Vaginitis and bladder or cervical infections can change a female dog’s scent, but it is unknown why these conditions do so.

It is likely that infections change the composition of vaginal discharge.

#4 Misled by another female’s scent

It is possible that reproductive pheromones from intact female dogs have rubbed off on your spayed pet.

If you have an intact female dog in your home or your dog spends time with one, their pheromones might have transferred through body secretions.

You may notice male dogs in the park following your spayed female in several ways.

They may be sniffing over a spot where your dog has peed and urinated over it themselves.

They may also be play-fighting and mounting other dogs regardless of spaying or neutering status.

These are all examples of dominant behaviors.

Dogs’ domineering behaviors are instilled from birth; the instinct comes from competing with newborn siblings for access to their mother’s milk.

Your dog may be grabbing others’ attention, not for reproductive reasons, but because she must be inducted into a canine hierarchy.

Dogs have a natural gift of communicating information about themselves – sex, age, health status, and more–through the exchange of scent.

A normal walk through the neighborhood is like a social media news feed of information for them. Out and about, you may notice that male dogs will still smell your spayed dog.

However, you can rest easy knowing that spaying has removed your dog’s scent of reproductive capability.

You’ve made a decision that improves the health and well-being of your dog. She is not at risk of breast or ovarian cancers, nor will she have to endure the bleeding and behaviors that are a part of the heat cycle.

Your dog will be freer to interact with all kinds of dogs, so she will be all the happier and healthier for it.

Are Border Terriers Easy To Train?

Should I Wake My Puppy Up To Eat?

Why Does My Dog Stare At Me When I Sleep?

Why does my dog keep barking at the corners of the room?