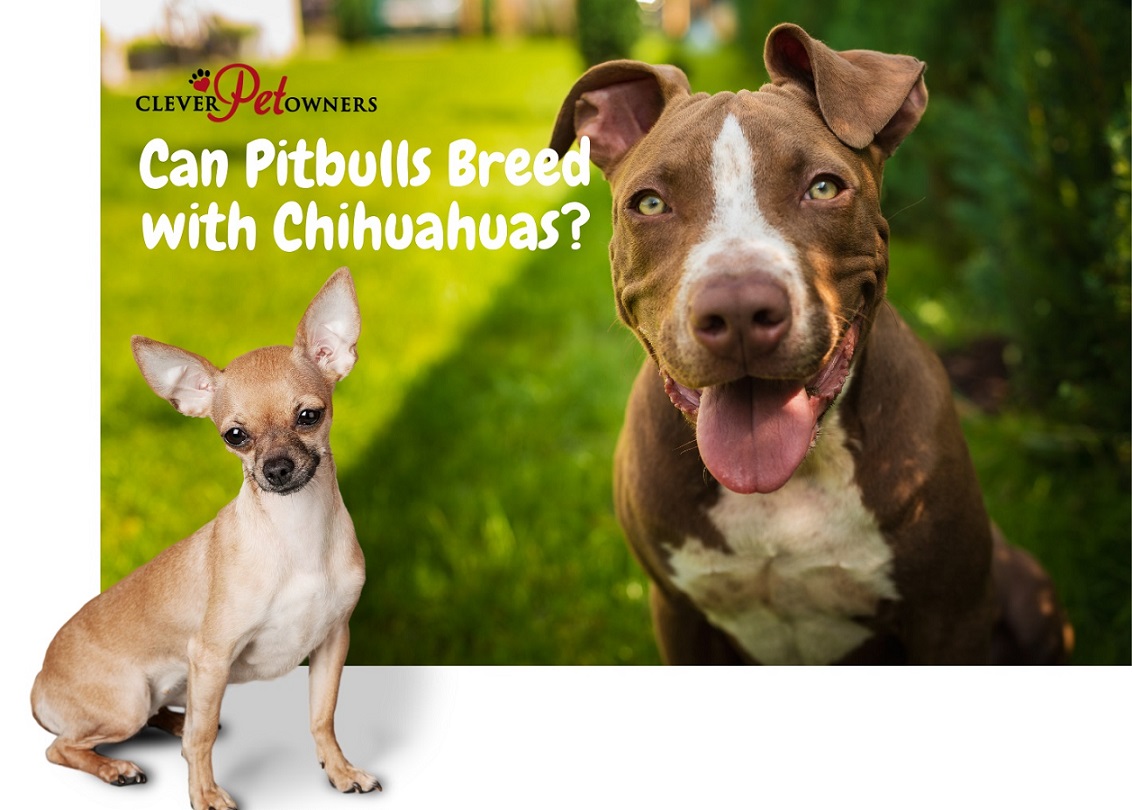 Are you an owner of Pitbulls and Chihuahuas and you wonder whether these two breeds can mate?

The short answer is Yes, a PitBull can breed with a Chihuahua and the resulting baby is called a Chipit or a Pithuahua.

Clever Pet Owners does not take the stance to encourage breeding the two dogs. However, we aim to provide the most accurate answers, along with the pros and cons so that you can make an informed decision for yourselves. Read on to find out more!

Reasons Why The Female Chihuahua Cannot Carry The Cross-Bred Baby

Due to the difference in size, the male pitbull could accidentally crush or even seriously maim the female Chihuahua in the process of mating.

This is due to the small anatomy and size of the Chihuahua dog breed. Chihuahuas have a highly sensitive spine and are prone to spinal injuries like intervertebral disk disease (IVDD).

While it doesn’t matter when it comes to same-sized dogs, it becomes an issue for a pair with a big difference in sizes. Mating a big pitbull with a tiny Chihuahua can lead to spinal column injuries resulting in pain and paralysis.

The mating process is rough as there is a lot of pawing and gentle biting. This usually does not cause injuries to either dog, but due to the difference in size, what is supposed to be gentle pawing might result in injuries to the smaller dog.

In the event the larger male successfully penetrates the small dog, you must keep the two dogs still. The female dog might end up crushed if she cannot control the bigger dog. Should the male dog decide to run around, he will end up dragging the distressed dog with him. This could be potentially dangerous for the female.

Dangers During Pregnancy And Birth

Even if the mating process is successful, pregnancy can also be hazardous. The pregnancy and birth of the crossbreed is a risky period for the female Chihuahua.

The crossbreed baby might be bigger than the uterus, and the birth canal of the pregnant Chihuahua to comfortably accommodate it. The puppies might be too big for the female Chihuahua to push out of her body.

At the end of the pregnancy period, the female Chihuahua might require C-section. If there is no timely intervention, the female and the puppies may die.

Steps To Breed A Pitbull With A Chihuahua

If done right, breeding your dog will provide a highly gratifying experience and a fantastic reward at the end of the process.

To get healthy puppies, you have to be on the lookout for parent dogs with a clean bill of health. You should also look out for dogs with temperamental issues, as you would not want those traits in your puppies.

Pros And Cons Of Breeding A Pitbull With A Chihuahua

There are several things to consider before deciding to crossbreed your dogs. Understanding the pros and cons of having a Pitbull Chihuahua mix will help you make a decision.

Pros (Yes, I am sure I will love the cross breed!)

They Can Be A Great Buddy:

The mix of a pit bull and a Chihuahua provides a loyal companion that you cannot find anywhere else.

They are very protective of their family and wary of strangers. Everything about this mix, from their looks to their strength, makes them the perfect guard dogs.

They are very intimidating and do not welcome pats and touches from strangers. They have quite the lungs on them, so they quickly alert the owners of any strangers on their property.

With their strength and bullishness, you might not expect it from them, but this mix can be very empathetic towards their master. They know when you feel happy and when your mood has taken a downturn.

On your sad days, your Chihuahua Pitbull mix will do its very best to make you smile. On your happy days, your dog will celebrate with you. The pit bull mix in the dog also comes alive as it loved being a lap dog.

Interesting READ  How Long Does It Take For A Dog To Forget its Owner?

They Have An Active Lifestyle:

The parent breeds that make up this unique mix are highly energetic animals. This trait is highly represented in the resulting mix.

The Chipit loves long runs. This is a great companion for individuals who love to run.

For those who can’t seem to stick to it, this bountiful ball of energy will keep them on the track, running the extra mile. For those who aren’t inclined to start running, stay away.

This dog mix will make you sweat. It is an excellent way for them to burn energy. They can quickly adapt to any new environment, but they require a bit of room to play in.

They have their most fun in an open field or a large backyard where they can run around and burn off their excess energy.

Crossing a pit bull with a Chihuahua creates a whole new dog breed. The possibilities of what could result are many, but you might not be able to handle what comes next.

Chihuahuas are one of the smallest dogs in the world, while pit bulls have medium to large builds.

Mixing the two dogs means you are in for a surprise as there is no telling how big or small the dog will be. The unknown growth spurt can be a problem if you don’t want a particularly big dog.

Families and pet owners have been known to send their pet dogs to the pound once they get too big.

Chihuahuas have a well-deserved reputation for being aggressive and bossy. Pit bulls, too, can be a handful if not properly trained.

The resulting mix of the two breeds will leave you wondering how exactly you want to handle your dog. The mix is also highly protective of their master.

Without masterful finessing, you might not be able to receive guests with your dog around. They have an overprotective nature which tends to get physical if they believe their owner to be in danger.

They Can Be Destructive When Bored:

This breed has vast energy, and they expend it by being playful. However, they tend to get bored quickly, and when they do, they burn off the excess energy by chewing on anything they get their paws on.

Shoes, shoelaces and sofas are often their prime target for burning off energy. The determined pitbull in them and the playful attitude synonymous with a Chihuahua ensure they are not deterred until they take down what they set their sights on.

A Chipit is a mix of all the best features of a Chihuahua and a Pitbull. What you get is an incredibly loyal and social pet with loads of energy and love to give. The loving and vocal dog has a lifespan of 11 to 14 tears and will fit into your family with ease.

Are Bandanas Good For Dogs? (7 benefits!)

How Long Does It Take For A Dog To Adjust To A New Dog?