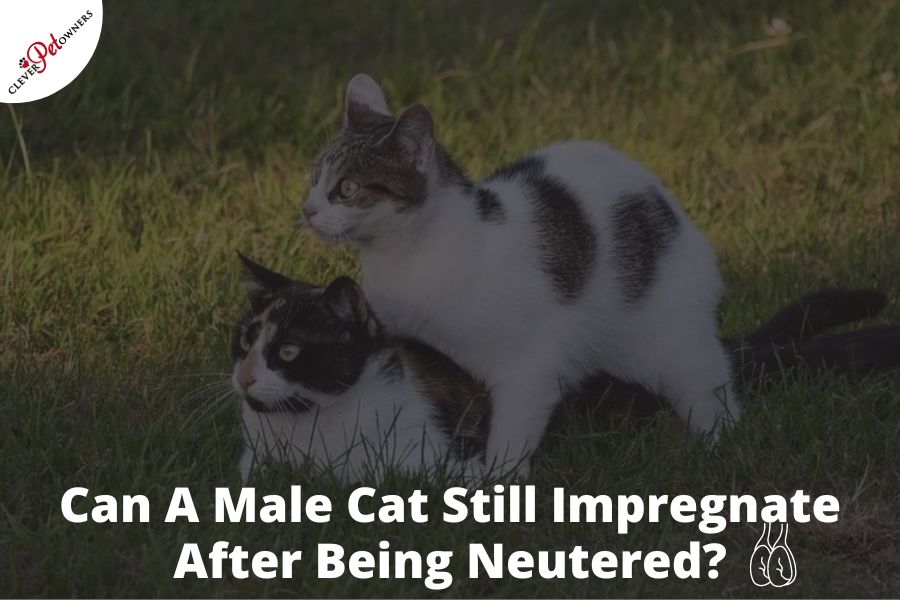 Has your female cat recently become pregnant even though your male one has been neutered? Are you wondering if he could be the father even after the procedure?

Even though the process of neutering sterilizes your male cat, he can still have lingering hormones and sperm for a few weeks after surgery that may impregnate a female cat.

Read on to find out how your female cat can get pregnant by a neutered male, and what to do to prevent that.

Contents
I) How could a neutered cat still impregnate a female cat?
II) How to prevent unwanted pregnancies by my neutered cat?
III) What to do if your cat really becomes pregnant?
IV) Can my fixed cats continue to have a sexual relationship in the future?
V) Conclusion

How could a neutered cat still impregnate a female cat?

After your cat is neutered, you may automatically assume he cannot impregnate females; however, sterilization doesn’t occur instantly.

Even though the sperm-producing testicles have been removed, there may be lingering sperm in the vas deferens (the tubes that transport sperm to the urethra).

This is especially true of cats that were sexually active at the time of castration. The sperm from the last ejaculation may linger in the genital tract for up to 6 weeks.

Although it’s rare, if your male cat gets around an unspayed female, he may be able to impregnate her while the remaining sperm resides in his genital tract.

Testosterone is the main hormone driving your male cat to reproduce. This sex hormone is significantly reduced once the testes are removed.

However, these hormones, much like sperm, can linger in a sexually mature cat’s system for weeks after surgery.

The lingering hormones coupled with sperm in the vas deferens can result in your cat still getting females pregnant in the weeks directly after the procedure.

You may be concerned by some of your cat’s remaining sexual habits. If your male cat is mounting your female, this behavior is sometimes unrelated to sex.

Some cats hump when they are excited or playing. Cats also use humping to assert dominance amongst their peers. This is not usually a cause for concern.

It is highly unlikely that a successfully neutered male could impregnate your female cat if there has been plenty of time between the surgery.

However, if the neutering was recently performed, the mounting can cause your cat to become pregnant.

How to prevent unwanted pregnancies by my neutered cat?

Isolate for up to 8 weeks

It takes a male cat about 2 weeks to fully recover from his neutering surgery. Your cat should definitely isolate for that amount of time to avoid post-surgery complications.

However, you may also want to consider isolating your cat, especially an outdoor one, for additional few weeks to keep him from impregnating any of the females in your neighborhood.

If you have an unspayed female at home, you definitely want to keep your cats separated for up to 8 weeks past the neutering to prevent any unwanted pregnancies.

Spay the female cat together

One great way to prevent your recently neutered male from impregnating your female is to get her spayed at the same time.

Interesting READ  Should I Get Two Kittens From The Same Litter?

You may be cautious about getting the procedure because spaying is a more invasive surgery than neutering. It may also seem redundant at first since you are already going to neuter the male cat.

However, Pregnancies in younger cats are often more difficult and dangerous for females.

A single female cat can go into heat every 4-6 weeks throughout the mating season, and she can start getting pregnant at as young as 4 months old.

Even if you plan to keep your female inside exclusively, the hormones produced during the heat cycle can drive her to escape. Cats can be extremely clever when it comes to getting out of the house.

Beyond pregnancy prevention, spaying also reduces the risk of mammary diseases. It also completely removes the risk of uterine and ovarian disease. Spaying is one way to ensure a good quality of life for your female and to prevent unwanted pregnancies.

Vets are divided about the best time to get a cat neutered, but some will perform the surgery as early as 6-8 weeks old.

This is very common in shelters where cats are often packed together with a much larger risk of pregnancy. Some vets argue that this is too young and that it stunts a cat’s growth. However, there isn’t a lot of evidence to support this claim.

Most cats are fixed at about 4-5 months old. This is usually a good age because it is right before the cat reaches sexual maturity (although some cats can be sexually mature as early as 4 months old).

Getting your cat neutered before it becomes sexually mature can help prevent lingering sperm and hormones.

It also helps avoid some of the sexual habits such as spraying, roaming, and fighting that can remain if you get your cat fixed after it has built routines around these behaviors. In this case, the earlier the better.

Sex hormones are also produced by the adrenal glands.

If your cat seems to be exhibiting sex hormones for longer than 4-6 weeks after their castration, or if you think that their behaviors seem off, you may want to get them checked by a vet.

If the adrenal glands get a tumor, although rare, this can produce an excess of sex hormones which may cause issues in fixed cats.

A vet would perform an X-ray to see if a tumor has formed on the adrenal glands and prescribe treatment accordingly.

What to do if your cat really becomes pregnant?

Make sure it was not other stray cats

Before assuming that your neutered male has impregnated your cat, make sure that other stray cats don’t have access to your female.

If she is an outside cat, she is likely to encounter other males, even if you never see them around.

Cats will travel long distances to mate, so there may be male cats coming from other neighborhoods to meet up with her.

It is much more plausible that your cat has been impregnated by one of these males than your neutered cat.

Interesting READ  Why Does My Cat Howl At Night?

If your cat is an indoor cat, make sure that she hasn’t found a way to escape. There may be an opening in a window screen, garage, or screened porch where she is gaining access to the outdoors. There is always a small possibility of her leaving and returning without your knowledge.

Since cats won’t show signs of being pregnant for several weeks, one of the first things you’ll want to do, if you suspect your cat is pregnant, is to take her to the vet to confirm the pregnancy.

Your vet may even be able to tell you how many kittens she is expecting.

You should be very careful with your cat. Avoid picking her up by her tummy and pressing on her growing belly. This can hurt the kittens.

After this visit, you will need to consider options for how you want to handle your cat’s pregnancy.

If you are in a place where you cannot take care of more cats, and you have found out that your cat is pregnant, there are a few options.

You can consider getting her spayed while she is pregnant. This is an abortion, which can cause people to have many strong feelings.

If you cannot afford to feed them or they will suffer neglect in any way, although unpleasant, this may be the best option for you.

Yet, if spaying while pregnant is not an option you feel comfortable with, you can let your cat deliver and take the kittens to a shelter.

However, be aware that some shelters do kill kittens that are surrendered to their facility.

Shelters are overcrowded and the cost of feeding and housing several kittens can be overwhelming. Try to locate a no-kill shelter that is not overrun with kittens already.

The final option is to allow your cat to give birth and find homes for the kittens yourself. This can be time-consuming, and you may not be able to get all of the kittens’ homes, especially if she has a large litter. Then, you will be left with the remaining kittens.

Can my fixed cats continue to have a sexual relationship in the future?

Your female and male cats may practice some of the sexual habits that they had before getting neutered and spayed. This is especially true if they engaged in sex before being fixed.

If you are concerned that your female cat has become pregnant by your neutered male, as unlikely as it may seem, it may be possible.

Be sure to consider other ways that she could have gotten pregnant before assuming your neutered male is the father. Then, make sure to get your pregnant female the veterinarian care she needs.

If you are trying to prevent unwanted cat pregnancies, the sooner you get your cats fixed, the more immediately successful the surgery will be.

Why Does My Pregnant Cat Keep Meowing? (3 reasons!)

Will My Cat Run Away If I Get Another Cat?

Should I Walk My Indoor Cat Outside? Pros & Cons