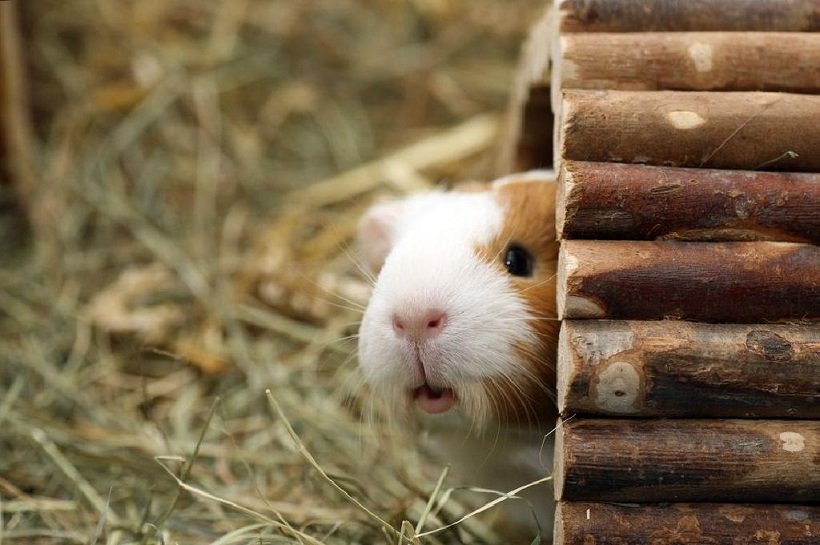 Have you noticed a recent change in your guinea pig’s behavior? It could be stress. Although stress is normal, it’s important to look for signs of illness.

A guinea pig won’t die from stress itself. That being said, stress is still dangerous because it can lead to serious health concerns. It is important to pay close attention to the various signs.

There are several signs to look out for and precautions to take when you suspect a stressed-out guinea pig.

Contents
I) Guinea Pigs and Stress
II) Guinea Pigs Stress Symptoms
III) Illnesses Resulting from Stress
IV) What to do if Your Cavy is Stressed Out?
V) Conclusion

Guinea pigs are prey animals, and because of this, they are susceptible to stress due to frequent threats. Several different things can stress out your cavy, mostly surrounding how safe your pet feels.

Also, the range of stress can be moderate to severe, depending on the stressor. For example, a slight change in diet will be less stressful than introducing a new person into the guinea pig’s life. Some stressors are relatively low and won’t cause significant health concerns, but others can cause severe health issues and infections.

The most common stressors are listed below:

Although this list is not exhaustive, just think about what might scare a prey animal. (Things like loud noises or a cat creeping up on the pig’s cage.) It is likely that whatever would scare them or make them feel threatened would also stress them out.

There are several ways you can tell if your guinea pig is stressed out. Thankfully, guinea pigs are very expressive creatures, so it’s easier to tell when something is wrong.

Interesting READ  When To Separate Male Guinea Pigs From Their Mother?

It is essential to recognize the signs of stress before they lead to illness. Stress is much more manageable than certain diseases. Stress itself won’t cause sudden death.

However, stress does cause various health concerns. When any animal is stressed, including people, they are more susceptible to diseases. Small mammals are especially at risk. These health concerns can, unfortunately, cause a cavy to pass away.

If you plan on moving, introducing a new family member (cavy or person), or anticipate any other potential stressors, be sure to prepare for them. Introduce new things, people, or environments as slowly as you can to reduce the stress level of your cavy. Another way to prevent stress is to provide plenty of hiding spots for your guinea pig.

Be aware of the following symptoms:

Use your best judgment in determining your pet’s stress. This list does have some opposites, and you know your pet better than a list. If your cavy usually is very cuddling and suddenly doesn’t want to hang out, they could be stressed out. Any sudden behavior change, especially after introducing something new, could point to a stressed-out piggy.

There are several different types of illnesses as a result of stress. Stress weakens the defense of a guinea pig’s immune system and makes them more susceptible to sickness.

As a disclaimer, this list is not exhaustive, nor am I a veterinarian. This list simply summarizes a scientific paper about guinea pig illnesses. Your vet will be able to give a complete answer as to what your guinea pig may have.

Other signs of illness could include:

If you feel like your guinea pig is showing signs of illness, please see a vet immediately. Guinea pigs are sensitive creatures and need to be treated right away.

What to do if Your Cavy is Stressed Out?

If you think that your guinea pig is stressed out, it’s essential to act quickly before they get sick. Remember, it is easier to handle a stressed pig than a sick one. There are several different options you have and various steps you can take:

Guinea pigs are sensitive to stress. They can’t die from stress directly, but it can lead to sudden death due to other illnesses. It is essential to know the signs of stress, and it is easier to handle a stressed cavy than a sick one.

Look for any behavior changes and changes in eating habits. If your pig starts to show signs of illness, such as different bathroom habits or a lack of eating, see your vet immediately.

To handle a stressed guinea pig, simply remove the stressor and give them a channel to decompress from the stress. Taking the proper steps to care for your piggy results in less stress not only for them but also for you.

Why Do Guinea Pigs Poop in Their Food Bowl?

How Many Times Can A Guinea Pig Get Pregnant?

Are Guinea Pigs Omnivores or Herbivores? You May Be Surprised!