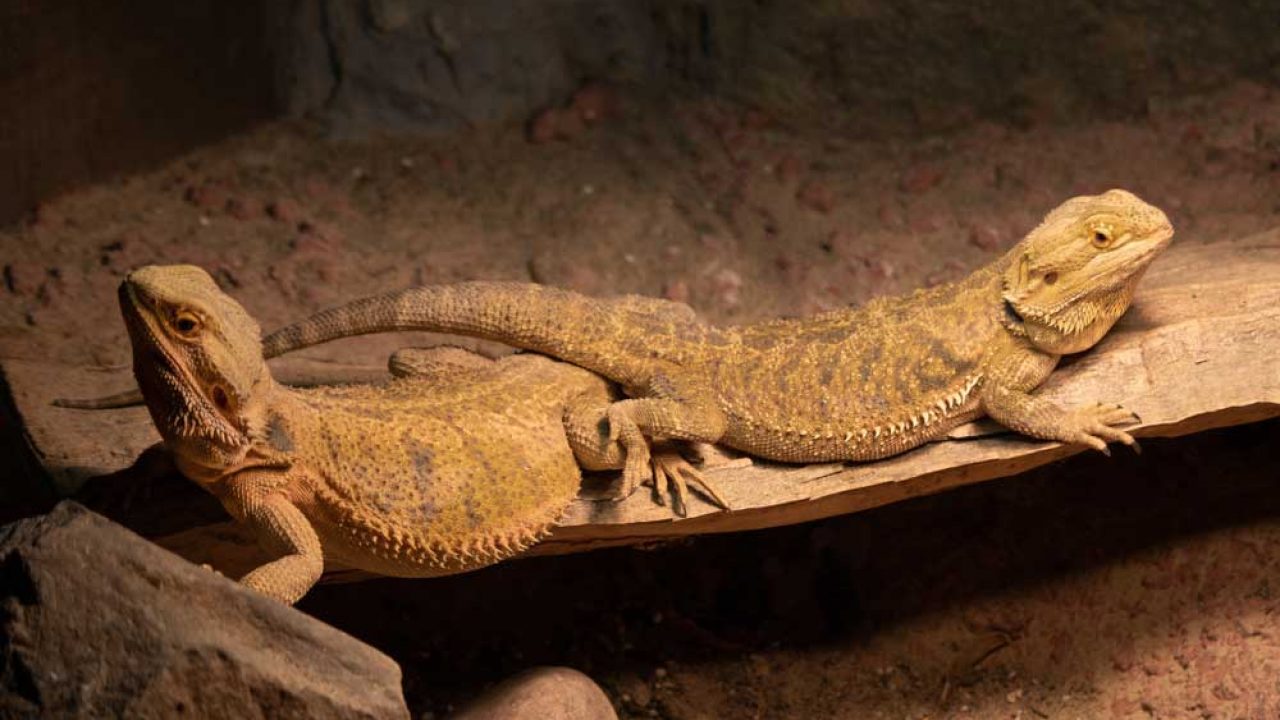 You may wonder if your bearded dragon gets lonely, and worry you’re denying him the companionship he needs to be happy.

Or, possibly… you’re considering purchasing two baby bearded dragons and need to know if they can be housed together as they grow older.

Or, maybe, you already have two male bearded dragons living in the same tank and you’re beginning to question if this is safe for them.

In this article, I will be answering all of these questions, going over the risks of housing bearded dragons together, and offering my advice to those of you who already own multiple dragons and don’t know what to do next.

So, can 2 male bearded dragons live together? Short answer… No.

Male bearded dragons battle over dominance, territory, and food. It is rare for them to get along in a healthy way. Along with a host of long-term issues, they are likely to harm each other by biting off limbs, tails, toes, or killing each other.

Why Can’t Male Bearded Dragons Be Housed Together?

Bearded dragons are solitary in nature, having no desire for companionship with their own kind. Instead of the kinship you may expect, bringing two male bearded dragons together will only result in violence and aggression. 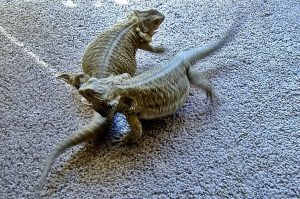 Weaker males will be driven away with intimidation tactics, but if the invader stands his ground, a brutal battle over dominance and territory ignites between the two rivals.

That is why, in captivity, male bearded dragons should never be housed in the same enclosure. In doing this, you are trapping the rival males together and taking away a weaker dragon’s chance to escape his rival’s aggression.

Meanwhile, the stronger or more dominant dragon is subjected to the constant stress of competition within his territory, a condition unfair and unnatural to him. Unless, that is, he chooses to end matters for good.

What You’re Risking If You Put Two Male Bearded Dragons In The Same Tank:

Housing any bearded dragons together can result in stress and battles for dominance, territory, and resources. Dominant dragons can threaten and intimidate their cage-mates, driving them away from their shared basking spots, food sources, or hides.

A dominant dragon might attack his cage mate, causing lacerations, broken bones, loss of limbs, and even death.

Stress caused by housing dragons together can lead to appetite loss and long-term damage or stunting to a dragon who is still growing. The dominant dragon may prevent the smaller dragon from accessing food at all.

One dragon may be more skilled in catching live food, leaving little to eat in their wake.

Bearded Dragons can be protective of basking areas and may ward off or lay on top of their cage-mates to absorb more heat and UVB-rays. The submissive beardie will not be able to digest their food without adequate time to bask, leading to rot inside their stomachs.

Interesting READ  What Essential Oils Are Toxic To Bearded Dragons?

And, without UVB, they cannot properly metabolize nutrients, which causes a host of issues, including Metabolic Bone Disease (a serious and painful condition caused by a deficit of calcium in their bones.)

Risks Of Housing 2 Beardies Together:

How To Catch And Prevent Aggression Between Male Bearded Dragons:

There are clues within your bearded dragon’s behaviors that may indicate the tank-mates are not getting along. Understanding the signals of bearded dragon body language is important for anyone who cares to know how their pet is feeling.

But, if you’ve decided to house multiple dragons together, these tell-tale warning signs can be the difference between the life and death of your pet.

Indications of a Stressed/Intimidated/Submissive Bearded Dragon:

Arm Waving- Used by submissive males or females to signify that they are no threat to a dominant dragon, or to acknowledge another dragon’s presence. If used excessively, it may indicate that your pet is feeling fearful or threatened by their cage-mate, who may be acting aggressively.

Slow Head Bobbing- Used by males to show submission and by females to show receptiveness to a male’s advances when breeding.

Appetite Loss and Stress Marks- Stress marks, appearing as black lines on their underbellies, indicate your dragon is under stress. A bearded dragon who is severely stressed by their cage-mate may stop eating entirely. These dragons will recline in health if not given their own living space.

Indications Of a Territorial/Aggressive/Dominant Bearded Dragon: 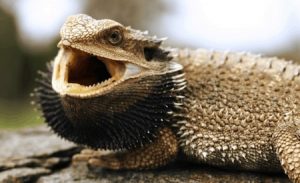 Fast Head Bobbing- Used to signify dominance or territorial aggression. The faster the head-bobbing, the more aggressive your dragon is feeling.

Laying on Top of Eachother- Bearded dragons lay on top of each other as an act of domination, by absorbing more UVB-rays than the submissive dragon, which they need to survive and grow. They also do this if there is a lack of levels within their cage, as dominant dragons try to sit above subordinates.

Bearded dragons are safer, healthier, and happier when you give them the right living conditions. Two male bearded dragons should be housed within separate tanks of 40 gallons or larger.

It’s best to keep these tanks out of viewing distance from each other, as even the sight of another dragon within a male’s perceived territory will cause agitation and stress. To achieve this, you can keep the tanks on a rack system, stacking one above the other.

Alternatively, you can put a visual barrier between their cages, or simply keep them in different rooms.

Can A Female And Male Bearded Dragon Live Together?

If done right, male and females can live together successfully. But, unless you’re planning to breed, it’s not recommended.

From a single mating, females can lay 3-4 clutches of up to 20 eggs each. If you’re not prepared to raise 80 scaly children, don’t attempt this housing combination.

Interesting READ  How Do Bearded Dragons Survive In The Wild?

Also note that breeding a female younger than 2 years old causes serious health issues. And, even between mated dragons, there’s risk of fighting and potential harm, so watch for the indications of aggression I mentioned above.

Groups of two females and one male can work too, but housing 2 males with a female can worsen aggressive tendencies between the males as they compete to breed the female.

Can 2 Female Bearded Dragons Live Together?

All beardies can be aggressive, territorial, and dominant, but females are generally less competitive than males. Two or more females have been caged together successfully many times by many people, but that doesn’t mean it never goes wrong.

Female beardies are no more sociable than their male counter-parts and are still better off living alone. Whether they tolerate company depends on whether you provide adequate space, basking areas, and hides in order for the dragons to coexist.

And, of course, you must be watchful and prepared to separate them if things don’t work out.

Can 2 Baby Bearded Dragons Live Together?

Newly hatched bearded dragons can live together if enough food and space is provided. Sometimes, these dragons cohabitate peacefully long into adulthood.

More often, however, their territorial and competitive nature sets in as they grow, at which point, they must be separated. Males demonstrate dominance very early on and can outgrow their cage-mates by hogging food, UVB-rays, and basking spots.

Eventually, the dominant dragon grows large enough to overpower and severely injure their brother/sister. Make sure the babies are the same age and remain the same size.

Otherwise, you must separate the dragons into their own enclosures.

Can 2 Bearded Dragons Live In A 40-gallon Tank? 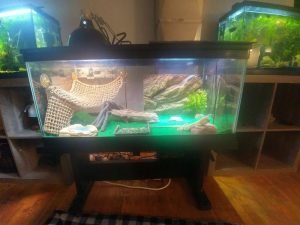 Bearded dragons need a minimum of 40 gallons each. This means two adult bearded dragons should be kept in a tank size of 80-150 gallons of space or an area of at least 6ft long and 2ft wide.

Offer an environment where your dragons can avoid each other, hides with an entrance and exit, separate feeding areas, multiple basking spots, and different levels for perching to prevent dominance, aggression, and competition over resources. Consider using a divider in the tank to separate the animals if needed.

Under no circumstances should 2 male bearded dragons live together, as it is natural for them to claim large territories for themselves, only meeting other males to fight over dominance. To force male bearded dragons to live within small quarters of each other is dangerous and harmful in both the short-term and the long-term.

Rest assured, he is not lonely without the companionship of his own kind. While some combinations of bearded dragons can live together peacefully, the reality is that bearded dragons are solitary creatures and will be better off living alone.

I only recommend attempting communal housing if you have the required knowledge, resources, space, and time. And no matter what, you must be prepared to separate your dragons into their own tanks if they do not cohabitate well.

Or, if you cannot give them that, are prepared to rehome one of your beloved pets so they can live a full and happy life.

Why Do Bearded Dragons Get Stress Marks When Shedding?

Can You Use A Fish Tank For A Bearded Dragon