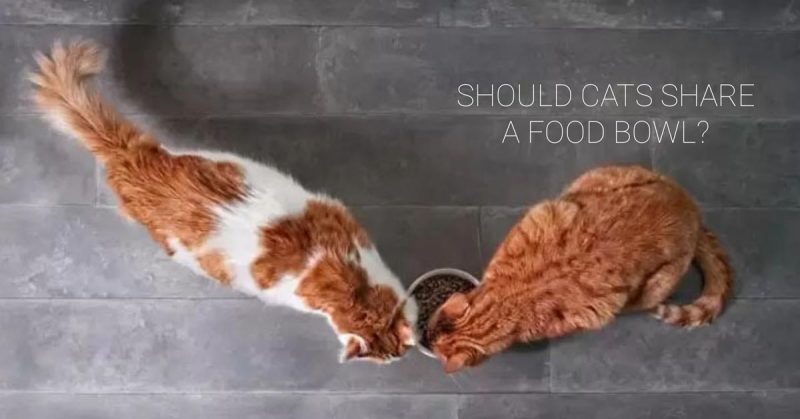 Do you have cats that appear to be picky eaters, cats that are losing weight, or cats fighting over their food, and you can’t seem to figure out why or how to help? Cats can have some particular feeding habits that we need to be more aware of.

Are you feeding cats from the same bowl? If you are, you may be causing your cats unnecessary feeding problems.

Is it possible for cats to eat from the same bowl or even eat near each other? Do I need to change the way I feed my cats?

It turns out there are scientifically proven reasons as to why we shouldn’t encourage our cats to eat from the same bowl so that they can be healthier and happier.

To learn more about sharing food bowl, check out our article on Bonding Cats.

GIF
Contents
I) Should We Change The Way We Feed Our Cats?
II) Why You Should Change Your Cat’s Feeding Habits
III) Three Signs Of Feeding Problems With Cats
IV) Why Don’t All Cat Owners Run Into Problems With Feeding 2 Cats From The Same Bowl?
V) How To Start Feeding Your Cats Naturally
VI) Final Thoughts

Should We Change The Way We Feed Our Cats?

Many experts are recommending that we need to change the entire way we feed cats. We should change the way we feed our cats if it’s causing problems for them, and even if it isn’t, it’s worth considering trying.

Why You Should Change Your Cat’s Feeding Habits

If you’re experiencing these problems with your cat, you should change your cats feeding habits to benefit their health and happiness. These tips can help you mimic how they are naturally inclined to eat in the wild and how their instincts are oriented to feeding.

We’ll get to the tips in a moment, but first, here’s a few good reasons why you should feed your cats separately and mimicking their instinctual feeding habits.

Mimic How Cats Eat In The Wild.

Feeding cats smaller meals separately mimics how they eat in the wild. Naturally, feral cats (you know, the ones wandering around your neighborhood) often eat many small meals spread throughout the day.

They have to adjust their eating habits to what they can get, so sometimes they may have a mouse here or there or a bird, which is just a few calories at a time. They’re also used to waiting a long time for another meal if prey gets hard to find. 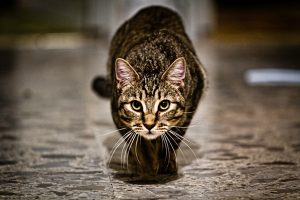 Feeding cats separately mimics how cats hunt: When cats hunt for their food in the wild as feral cats, they sneak up on their prey, which explains why they like to do this alone.

You don’t really see a group of cats sneaking up on an unlucky mouse or bird. And, all cats will do this at some point because their primal hunting instinct is hardwired into them.

Interesting READ  Why Is My Cat So Affectionate In The Morning

Feeding cats from different bowls mimics how cats relate to each other socially to eat.

This means when one cat in a home must be fed separately from the others, she is probably happier.” So, it turns out cats like to eat alone in addition to hunting alone, too, according to Hills.

You need to change the feeding situation for your cats if you notice some of these behaviors from your cat:

Your Cats Are Fighting Over Food. 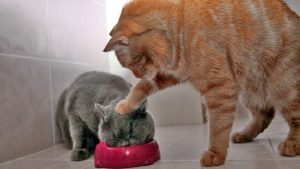 Your Cats Throw Up After Eating.

This could mean they’re gobbling it so that the other cats don’t take their food. When cats do this, it’s called “scarf and barf.”

This can also lead to cats losing weight because they aren’t keeping their food down. Think of how you feel when you eat too fast!

Why Don’t All Cat Owners Run Into Problems With Feeding 2 Cats From The Same Bowl?

It turns out our house cats can exist together and view each other as part of the same group, keeping them from fighting with each other for food. These groups of cats are called colonies.

If you have multiple cats living in the same house and get along, they likely feel like they’re from the same group. If your cats have been eating from the same bowl and you haven’t noticed any problems, there are two reasons for this.

Your Cats Think They’re Part Of The Same Group.

If your cats think they are from the same colony, they won’t fight with one another or compete for resources. They’ll even defend each other if a strange cat tries to attack or infiltrate their group.

Your Cats Think There’s Enough Food For Everyone.

If your cats don’t have any problems eating from the same bowl, it’s probably because they think there’s enough food to go around. Once the food in the food bowl gets too low, you’ll start to notice some behavioral problems between your cats.

How To Start Feeding Your Cats Naturally

If feeding two cats with one bowl is working for you, is it worth changing the routine they’re used to? After all, we all know that cats like their routine and don’t like change, so as the old saying goes: if it isn’t broken, don’t try to fix it!

Interesting READ  Why Do Cats Eat Their Hair? (6 reasons!)

However, it is worth trying feeding strategies that experts recommend are best for our cats because of the potential problems we mentioned before that can occur. Despite being in the same colony, cats still are wired to hunt and eat alone.

Let’s start with the food bowl. It turns out that food bowls aren’t even the best option for cats because of their whiskers.

If the cat’s whiskers brush against the side of the food bowl, it can be a bit uncomfortable. Instead, it’s recommended to feed your cat from a flat dish and raise your cat’s dish that they feed from. An alternative is to use a shallow bowl.

That way, it’s easier for them to get to the food, and their whiskers don’t get in the way in the process.

Feed Your Cats In Separate Places.

Another good thing to do for your cats is to feed them in separate places from other cats living in the home. Cats often feel vulnerable when they’re feeding, so they may eat less if they’re eating beside each other so they can hurry up and get it done before they could get attacked by predators or other cats trying to steal their food. 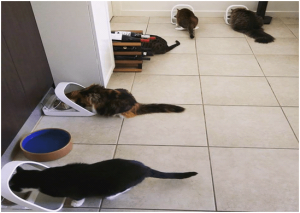 Give Your Cats Small Meals, Not Big Ones.

Other ways you can be more in tune with your cat’s natural eating habits are placing their food dish away from their water bowl and hiding their food in places they can find them as if it were a hunting game.

So, it turns out two cats can eat from the same bowl if they think they’re from the same colony and there’s enough food to go around. But, just because they can, it doesn’t mean it’s the best way to feed them.

Why Does My Cat Rub Against My Legs?

Cat Peeing In The House After Getting A New Dog. Help!

How To Tell If Your Cat Wants Another Cat (6 signs!)