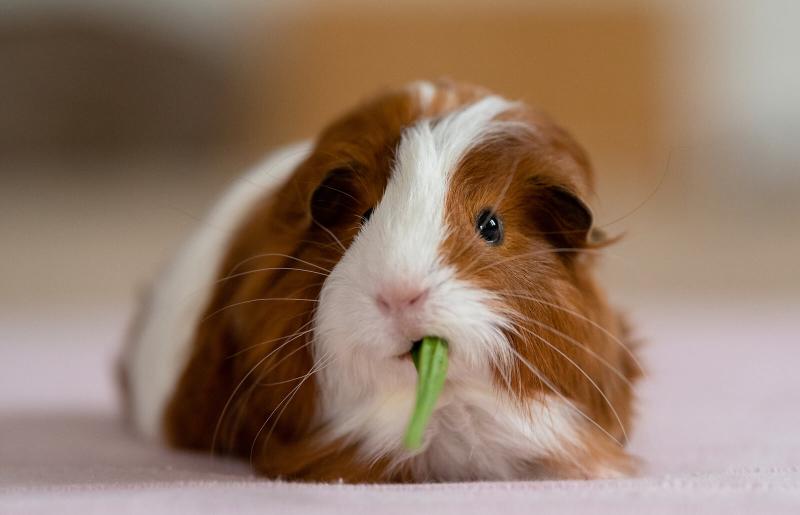 Chances are you have likely seen a guinea pig with a coat featuring shades of red, black, and white. You may even have thought to yourself, “Is this a calico guinea pig?”

While the calico gene is specific to cats, guinea pigs also have beautiful black, red, and white coats. These piggies are better known as the tortoiseshell and white cavy variation, or TSW for short. This type of coloring is very popular among guinea pig owners.

Read on to learn more about “calico” guinea pigs and why they are such popular pets!

What is a Calico Guinea Pig?

This intermingling has been dubbed brindling. It is especially important that show variety cavies do not have any bridling.

There is a variety of guinea pig, known as a brindle, that has colors that run together. While your calico cavy may not be ready to win best in show, a guinea pig with brindling makes a great companion all the same.

Tortoiseshell and white guinea pigs should only have two colors covering their face. Any variation of colors could occur -red and white, black and red, or even black and white. Brindling may also occur on the face, resulting in patches of the guinea pig’s third color.

The tortoiseshell and white variety of guinea pigs are most likely to have a smooth coat like that of the American guinea pig. However, these guinea pigs have been known to come in other long-haired breeds, such as Abyssinian.

Short-haired varieties of the calico guinea pig are considered to be the most well-suited for competing in shows, and this is because their coloring is often neater than their longer-haired counterparts.

Interesting READ  How Many Times Can A Guinea Pig Get Pregnant?

In short, the answer is no; tortoiseshell and white guinea pigs may be either male or female, and this may be confusing for new guinea pig owners. If calico cats are only female, why can calico guinea pigs be either sex?

The answer lies in genetics. The calico gene is specific to the feline species, and female cats carry the gene that determines fur color. Sometimes, a process occurs in which the genes for black and orange fur are inactivated by each other, resulting in the patchy appearance we recognize as calico.

Cats are also prone to a condition called pie balding. This is another genetic condition that causes a lack of pigmentation in various patches. This is what causes the female calico cat to have a tri-colored coat.

Origin of The Tortoiseshell and White Guinea Pigs

Guinea pig genetics work similarly to those of humans. Cavies inherit half of their genes from their father and half from their mother.

The colors that you see on your guinea pig, technically known as the phenotype of genes, are a mixture of the parent pigs’ genes. Genes that are commonly seen in guinea pigs are likely to be dominant genes. This means that these genes overpower the weaker or recessive genes.

Generally, darker colors are more dominant. This may explain why you see both black and red in your tortoiseshell and white guinea pig! However, how can we explain the white patches?

Interesting READ  Can you use shredded paper for guinea pig bedding?

Think back to the lesson on calico cats. Sometimes, genes may not completely overpower each other.

Instead, they may “share” dominance, allowing both genes, or a mixture of genes, to show. This often happens with guinea pigs.

Since the species has been domesticated for so long, a variety of guinea pig colors have been bred. If guinea pigs are allowed to breed without being paired for a selection of colors, a myriad of colors may occur. Thus, the calico guinea pig is born!

Another thing to note is that breeding two guinea pigs may not result in the expected colors. Guinea pigs are known for having complex genes, meaning they may carry recessive color genes that cannot be seen on their coat. Because of these complex genetics, it is much more common to see guinea pigs with two to three color variations.

We know all of this because guinea pigs have been used in numerous medical experiments throughout history. Given that guinea pigs are biologically similar to humans in many ways, they have often been called upon to be lab specimens.

Tortoiseshell and white guinea pigs are not rare, and in fact, they are one of the most common color variations of the species. Guinea pigs have evolved to have many coat variations, and it is only natural that these color variations would eventually be seen together.

There are lots to know about calico guinea pigs. While they are one of the most common guinea pig color variations, they are no less loving and playful. Whether you would like a male or female guinea pig, you could be lucky enough to find a cavy with a beautiful calico coat.

The complex genetics of guinea pigs make it possible for us to enjoy piggies with a wide array of colors. Whatever color guinea pig you desire, you can be sure to find it. Your gorgeous and unique companion is waiting to meet you.

Is My Guinea Pig Pregnant Or Just Fat?