Intact female chihuahuas may become pregnant once they have reached puberty. In most dogs this occurs at 6 months of age, but a chihuahua may enter puberty a little bit earlier.

Most chihuahuas and other toy breeds reach sexual maturity anytime between 4 and 7 months. As a general rule of thumb, most owners are encouraged not to breed their dogs until the second estrous (also known as heat) cycle, but this is not necessarily true for chihuahuas.

Chihuahuas may become pregnant during their first heat cycle. Unlike humans, dogs are only fertile during the heat cycle, so it’s important to monitor for signs of heat if you are attempting to breed your chihuahua.

How To Know When Your Chihuahua Is Ready To Breed

The heat cycle in chihuahuas typically occurs every six months, but it is common for small breed dogs to have three cycles per year. If you notice swelling and discoloration of the vulva or external genitalia, that could mean that your dog is going into heat.

Chihuahuas in heat may also seem more interested in male dogs and an increase in licking of the genitalia may also be noted. As the heat cycle progresses, there will often be noticeable discharge from the dog’s vagina.

This will generally appear as a thick, bloody discharge that progresses into thinner more yellow colored discharge as the cycle continues. This thinner, yellow discharge is more indicative of the window of fertility in a chihuahua.

There is only a small window of time during the heat cycle that conception may actually occur. A chihuahua is most fertile between 10-15 days after the beginning of vaginal discharge in the heat cycle.

This is the time when the eggs will drop and the chihuahua is most likely to become pregnant.

Signs Of Pregnancy In The Chihuahua

Once breeding has occurred, it is important to monitor for signs of pregnancy in your chihuahua, as they will require additional care during this time. Pregnancy in a chihuahua will normally last 63 days, but can occur as early as 54 days or as late as 72 days.

One of the first indications of pregnancy in a chihuahua may be weight gain. This is generally noted after the first couple of weeks. 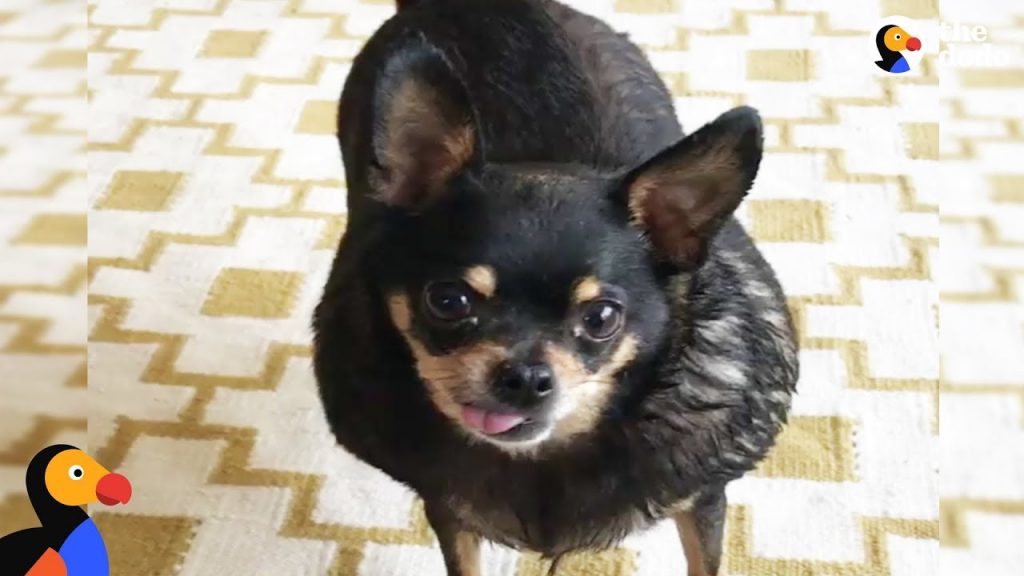 At about 3 or 4 weeks gestation, some dogs may develop ‘morning sickness’ and will be more tired than usual and less interested in food. Occasionally, vomiting may be seen during this time.

Around 20-30 days of the pregnancy, a noticeable enlargement in the size of the abdomen may be noted. During this time, the chihuahua’s nipples may become enlarged and occasionally lactation may occur.

At around 4 weeks of the pregnancy, your veterinarian will be able to view the fetuses via ultrasound. Pregnant chihuahuas should have consistent follow up with a veterinarian to confirm the health of the mother as well as the unborn puppies.

Interesting READ  Should I Wake My Puppy Up To Eat?

Around 25-35 days of pregnancy, the puppies will be approximately the size of walnuts and your veterinarian will be able to perform a manual exam. Between 4 and 5 weeks, there may be a clear, mucoid vaginal discharge which can last until the end of the pregnancy.

Anywhere between 45 and 60 days, pregnancy may be confirmed via radiograph at your veterinarian’s office. During the last two weeks of pregnancy, you may be able to visualize movement of the unborn puppies.

Your veterinarian may take a final radiograph to show the size of the puppies to ensure the mother is able to give birth naturally. After this final checkup, it’s time to start preparing for the arrival of the puppies.

Some complications associated with pregnancy include low blood glucose (sugar) levels and low calcium blood levels. Low blood glucose levels occur often in pregnant chihuahuas because a shift in hormones during this time may cause a decrease in appetite.

Many dogs will require puppy food during pregnancy, because it is fortified with the nutrients needed to sustain pregnancy. You should seek prompt veterinary care if you believe your chihuahua is suffering from either of these conditions.

Once you have determined the time frame for when your chihuahua is ready to begin having puppies, there are a number of steps to take to ensure a safe, comfortable delivery. The first step is to provide a small space for the dog to feel comfortable and secure during the birthing process.

Many breeders use a whelping box which consists of a small wooden or cardboard box with low sides. The sides should be low enough that the chihuahua can look out over them and you may reach over if help is needed.

The next step is to line the box with comfortable, absorbable material. Generally, newspaper is used for the bottom layer with layers of towels or blankets on top.

There should be plenty of layers available so they may be removed as they become soiled. The delivery area or whelping box should be set up at least two weeks prior to the delivery date.

Your chihuahua should be encouraged to explore and spend time in this area to become comfortable with it. Once this area has been prepared, it is time to start monitoring for signs of labor.

Signs Of Labor In A Pregnant Chihuahua

Interesting READ  My Dog's Stool Is Firm In The Morning But Loose In The Evening - What's Wrong?

A drop in the dog’s temperature to 98.6 degrees Fahrenheit is generally an indication that labor will begin in the next 12-24 hours. In the 12-24 hours prior to active labor, you may notice your chihuahua organizing the blankets in her new space and nesting there in preparation for labor. 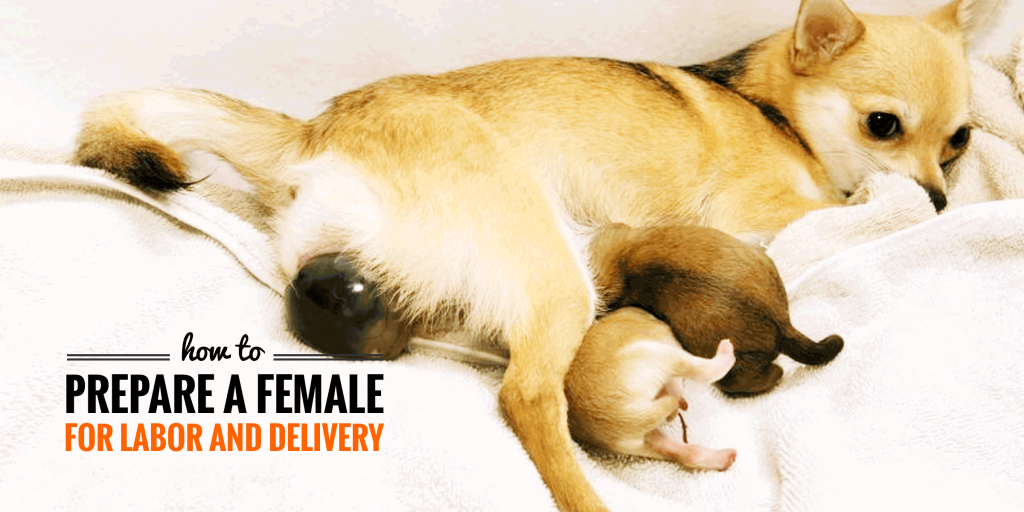 The Stages Of Labor And Delivery In A Pregnant Chihuahua

There are three main stages of labor in chihuahuas. During the first stage, the chihuahua may appear restless and may pant and shiver.

You may notice swelling of the vulva in preparation for delivery. During this phase, there are generally very small contractions which may or may not be visible.

Stage two begins the passing of puppies. This generally takes between 3-12 hours, but can take up to 24 hours.

A clear liquid discharge from the vulva will be evident and the passing of a puppy should follow in about 20-30 minutes. There is normally about a 20-minute window in between delivery of each puppy, but it may take as long as 2 hours.

A greenish/brown discharge is normal and may suggest a placenta has separated. In this case, a puppy should be born in the next 2-4 hours.

The mother should bite through each puppy’s embryonic sac and umbilical cord to begin cleaning each puppy immediately after delivery. If this does not occur, the owner may need to assist with tying off the umbilical cord.

The final stage of delivery is the passing of each placenta. There should be one placenta for each puppy.

If there are not, it may mean there is a puppy still inside, which may require veterinary attention. If at any time the delivery is taking a long time, either between puppies or throughout the entire delivery, it is important to seek the advice of a veterinary medical professional.

Complications Of Delivery In The Chihuahua

One of the most common complications of birth with a chihuahua is that the mother is unable to pass the puppies through the birth canal. Due to their small nature, chihuahuas may often require a C-section if the puppies are too large to pass during a natural birth.

This is more likely if the chihuahua was bred with a dog larger than herself. Your veterinarian may be able to visualize the size of the puppies on radiographs prior to delivery and may schedule a C-section in advance to avoid a complicated delivery.

How Many Puppies Will My Chihuahua Have? 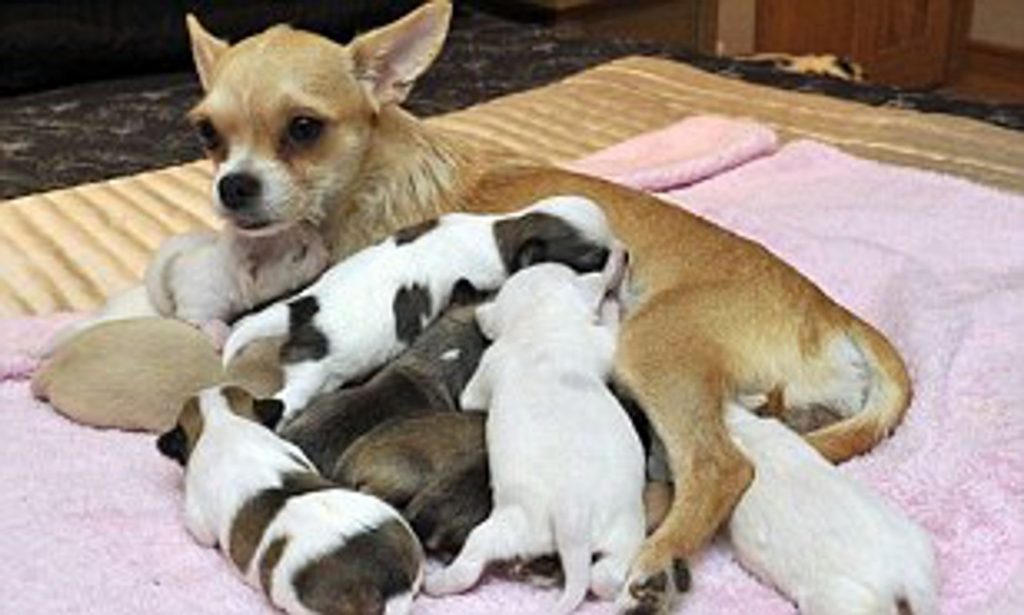 The average size for a litter of puppies from a chihuahua is generally 1-3 puppies per litter. However, it is not uncommon for the dog’s first litter to be the largest.

The first litter may have up to 5-6 puppies in it. This may also be dependent on the chihuahua’s age at the time of breeding.

Younger chihuahuas typically have smaller litters whereas a more mature chihuahua may have a larger litter.