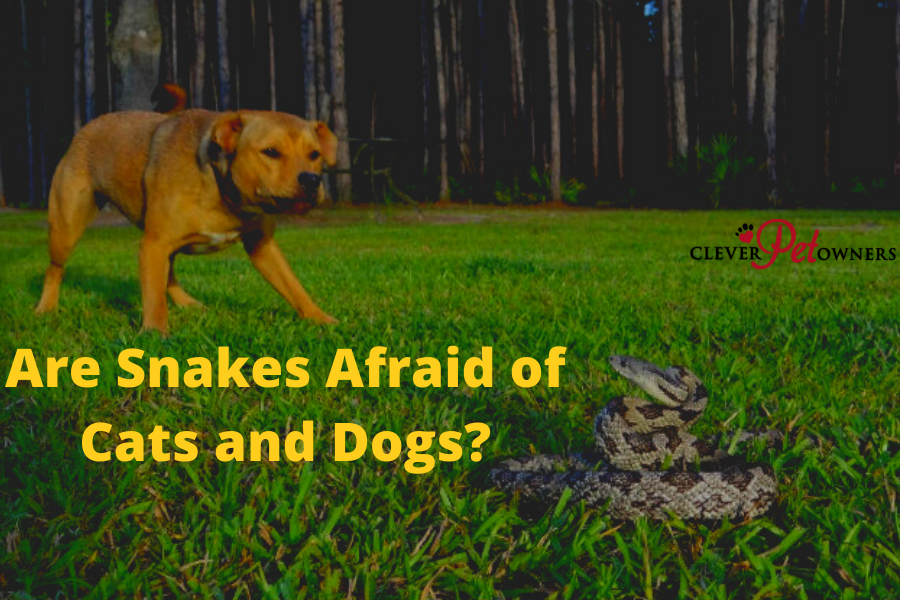 Snakes are secretive creatures that spend much of their time trying to avoid confrontations with bigger animals, but some may be wondering if their dog or cat is large enough to frighten a snake.

The answer is yes. All snakes are usually distrusting and fearful of larger animals, especially those likely to take an interest in attacking.

Due to how dogs and cats look and behave, these house pets can be incredibly terrifying to snakes.

To learn more about why dogs and cats pose such a threat to snakes and what you should do to keep encounters between our furry friends and our snakes at the bare minimum, continue reading.

Contents hide
1 Dogs Are Large, Scary Animals to Snakes
2 Cats Are Predators of Snakes
3 How to Keep Your Pet Snake Safe from Cats and Dogs
4 Helping a Snake That Has Been Wounded by a Dog or Cat
5 Conclusion

Due to the innate predator instincts within all canines, dogs sometimes behave in ways that appear aggressive towards other creatures, even if they have no intention to attack.

A defensive snake may attempt to bite the dog instead of seeking refuge. But in some encounters, the snake may end up getting killed by the canine.

Here are some of the reasons why dogs interact with snakes and how a snake will usually respond to these encounters.

It is in a dog’s nature to be curious. They will often sniff out new locations and objects to get an understanding of their environment.

If a dog catches the scent or sight of an unfamiliar animal such as a snake, it will usually want to investigate.

Being noticed by a potential predator is a snake’s worst nightmare, so as soon as a dog comes into its view, it will usually try to bolt in the other direction or attempt to ward away the investigative canine.

Dogs are playful animals that occasionally view the local wildlife as potential playmates no matter what species they may be.

The sight of the dog and the significant vibrations that the canine makes will especially be frightening for any snake.

In a long, drawn-out encounter, the snake may hiss, assume a striking position, or rattle its tail depending on its species, but the dog will probably not pick up on this as a warning to leave the animal alone.

A persistent dog that does not understand these cues to leave the snake alone will only stress the snake out further.

While dogs do not necessarily need to kill snakes as much as a cat might, they occasionally do hunt snakes.

If the loud, boisterous animal making distressing vibrations has not scared away the snake yet, an attacking dog’s jaws and large, heavy paws will.

These physical aspects of dogs can be fatal for snakes just due to the size and power of the canine alone, as a dog’s teeth or feet could easily crush a snake.

Cats Are Predators of Snakes

Cats are one of the few domesticated animals that have fully retained their ancient hunting instincts, and they practice these skills every day, either while in a house or outside in nature.

This makes felines quite deadly to smaller animals and means that confrontations involving cats are likely to end badly for the snake.

Cats and Snakes Tend to Have Unfriendly Interactions

If a cat comes across a wild or captive snake, one of two things could happen:

The cat might immediately become defensive, or it might decide to kill the snake for food or sport.

On the other hand, the snake will try to keep itself safe by fleeing or launching a counterattack against the cat.

Many of the smaller snake species will usually lose in a fight with a feline that is well-acquainted with the art of stalking and hunting prey.

A Snake May Seem Like Prey to a Cat

Because cats are carnivores, much of their day involves stalking and hunting anything that moves like prey.

This does not mean that they will always eat what they catch, but they will usually try to kill or subdue anything they can get.

A small, slithering reptile in the backyard may seem like the perfect prey for a cat to pursue.

A snake will eventually pick up on this hunting behavior, but if it cannot get away in time, an encounter with an approaching cat can quickly turn from stressful to lethal for the snake.

On top of having refined killing instincts, cats are swift and agile animals that will give a snake a run for its money.

Felines also have sharp, retractable claws and pointy canine teeth that would make short work of a snake.

As we have discussed earlier with dogs, a snake that is being attacked may forgo fleeing and attempt to fight back.

However, due to the cat’s skilled nature as a hunter, she can evade this and land a killing blow to the snake with its teeth or paws.

How to Keep Your Pet Snake Safe from Cats and Dogs

Since snakes will likely be targeted by other house pets like dogs and cats, it is essential to ensure they are kept away from any animal that might stress it out or harm it.

Here are some of the ways you can help protect your snakes from your free-roaming house pets:

Keep Your Snake in An Enclosed Space

It is best to house snakes in a tank or terrarium where they are protected from predatory animals like dogs and cats.

Likewise, this will also help to make sure that your snakes are unable to escape and potentially come face to face with a larger animal in the house.

If the tank or enclosure has a screen top or lid, make sure that there are no tears or breaks in the mesh that might allow a curious dog or cat to break into the enclosure.

Try to keep the snake’s habitat on a raised platform such as a TV stand or dresser to dissuade your other pets from getting on top of it or breaking into it.

No matter how much you may trust your cat or dog around your snake, it is best to keep the snake out of harm’s way by not allowing it to roam around the house with other animals.

We know that dogs and cats are predatory animals that instinctually prey on smaller creatures.

Therefore, it only takes a split second of you letting your guard down for something terrible to happen to your pet snake if they are in a space with a dog or cat.

If you need to take the snake out of the tank, make sure that it is constantly being supervised. Try to keep dogs, cats, or other large animals in a separate room while the snake is out of its enclosure.

Even after following precautions to help protect your pet snake, accidents can happen.

If your snake has been hurt by a dog or cat, it will need to be taken to a trained reptile veterinarian right away to assess its condition.

Dogs and cats carry loads of nasty bacteria in their mouths and saliva that can harm your snake if it is transferred into the wound.

If your snake gets bitten by either animal, a vet will be able to help clean the wound and prescribe oral or injectable antibiotics to make sure that the bite does not become infected.

Depending on the snake’s size, a bite might cause internal damage.

In this case, a vet will also be to perform an x-ray to see if any of its bones were broken due to the injury or if the snake may need surgery.

Cat Scratches Will Also Need to Be Treated

Cats pose the risk of biting and scratching your snake as well.

While you might think that a cat scratch would not cause a major wound in a snake, these lacerations can be a lot deeper than they appear, especially on smaller snakes.

Cat claws can also harbor dangerous bacteria that can hurt your snake if the wound is left untreated.

This kind of injury will need a topical antibiotic ointment such as Neosporin or a diluted Betadine soak at the very least.

An exotic vet can also provide an oral medication to reduce the likelihood of infection or prevent swelling.

Snakes have every reason to be fearful of dogs and cats, especially considering the predatory instincts that these mammals often show towards smaller creatures.

In these confrontations, snakes will primarily want to get away from a dog or cat that has entered its space.

A cornered snake will defend itself in the best way it knows how: by striking and biting. However, cats and dogs have an even higher potential to do extreme damage to a snake.

In fact, interactions between these animals can turn deadly for the snake.

To avoid these encounters, ensure that your snakes are kept in enclosed tanks or terrariums with no holes or exit points.

Even if your dog or cat appears to act in a friendly manner towards your pet snake, it is best to keep these animals separated.