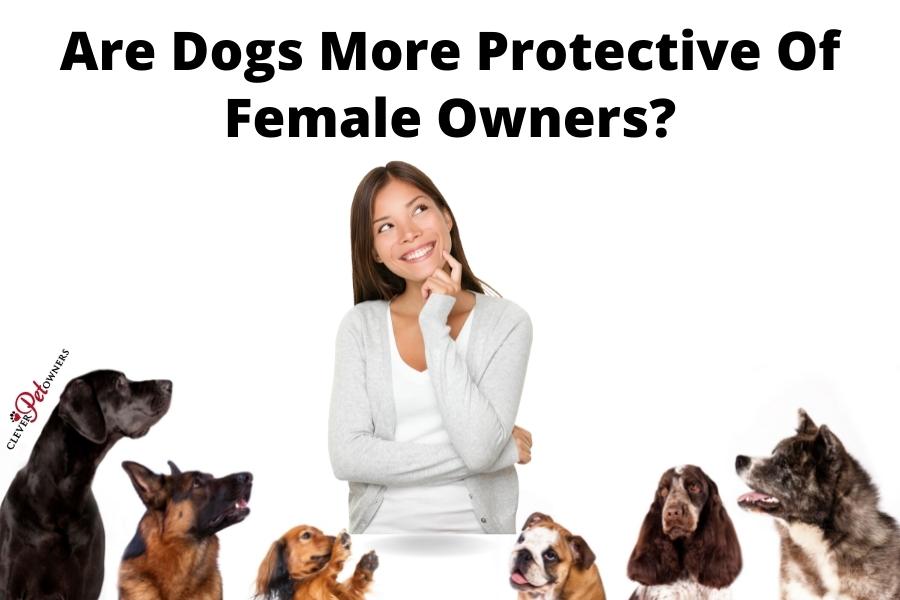 Dogs have long been considered man’s best friend, but when it comes down to protective behavior, is Fido more likely to be on high alert with a female owner?

Dogs are insightful mammals, and they are just as sensitive to human behavior as they are to their own kind.

While there are additional elements in female owners that bring out protectiveness than in male owners, dogs generally are not more protective of women over men.

Read on to learn more about what prompts a dog to exhibit protective behavior towards its owner and how gender plays a part.

Contents
I) What Makes a Dog Protective?
II) Are Dogs More Protective of Male or Female Owners?
III) Does the Gender or Breed of the Dog Matter?

What Makes a Dog Protective?

When trying to understand whether a dog is more protective of a female owner versus a male owner, it is valuable to first note the signs and behaviors exhibited in a protective dog.

Dogs are natural-born leaders, and guarding is one of the most common signs of protective behavior in our canine companions.

When a dog demonstrates “guarding,” it will likely sit or lay down at your feet.

Dogs tend to portray guarding behavior towards their owners when around larger groups, such as out at a restaurant or a party.

This is not to be confused when your dog lays down to sleep. When a dog is in “guard-mode”, sleep is the last thing on its mind.

Look for indications of guarding on your next outing or the next time you have guests over:

Next, look out for eye contact. It might sound strange, but if your dog stares deep into your eyes, it might be an indicator of protective behavior.

Dogs often communicate through varying facial expressions, and eye contact is at the top of their list when it comes to displaying trust.

Displays of affection are also signs of a protective dog. Just like humans, our furry friends can also offer their owners affection.

Since they cannot speak, dogs often communicate their love through physical touch.

Whether they rub a nose against your hand, lick your cheek, or just lean against your leg, your dog is letting you know they trust you, and you should return the sentiment.

However, protective behavior in a dog does not just occur out of the blue. There are contributing factors to consider.

An outside threat is the most common trigger of protectiveness. These threats don’t necessarily have to be “dangerous” situations for a dog to react in a protective way.

A likely outside threat is a stranger, someone the dog has never met before.

Dogs associate memory with smell, so if they have not yet learned the smell of someone, they are more apt to display signs of protective behavior.

A dog may let out a few barks, but if its tail is wagging, the protective behavior has not progressed towards aggression.

Interesting READ  Can Yorkies Eat Peanut Butter? If yes, which ones?

It is recommended to let your dog sniff around anyone new before they go in to give pets.

Another trigger might be an injury. Through their keen sense of smell, dogs have been known to detect many injuries in humans, from external wounds through traces of blood to internal illnesses, such as cancerous tumors.

When it senses an injury, a dog’s natural instincts kick in, making it want to protect its owner.

The canine nose can also detect more than just injuries or diseases. It can also identify different hormones in humans that can elicit protective tendencies.

Not all dogs react to these hormones the same way.

The general reaction is protectiveness, especially during pregnancy, because the owner’s body undergoes noticeable changes that a dog will pick up on.

Are Dogs More Protective of Male or Female Owners?

In examining a dog’s protective characteristics regarding gender, it is also important to break down the differences (if any) in male and female canine owners.

Males are commonly larger than their opposite sex, making them broader and taller. A man’s tone is often deep and strong, which naturally gives off a sense of authority in a dog’s eyes.

Females are generally smaller than males in both height and weight. Women are likely to have lower, if not gentler tones, and these softer qualities tend to make a dog feel safe and attended to.

The owner’s characteristics can bring about protectiveness in a dog

Now, looking at both male and female characteristics, it is easy to see how one gender (male) might come across as more domineering than the other (female).

Dogs thrive off both direction and pampering, but they are also pack animals. And in a pack, there is the leader, the one who protects the pack, and then there are the ones that follow.

This is the case in many dog and human relationships as well—one who leads, one who follows.

Although pack behavior is not exclusively reliant on gender, there are some characteristics within each sex that elicit protective responses from a dog.

Given that females are usually the caretakers of feeding, grooming, and, yes, spoiling, dogs are more susceptible to take on the “leader” persona, which does generate protective behavior.

Dogs who possess more dominant qualities often portray protective behavior through guarding, which shows any outward threat that they are the pack leader.

On the other hand, a male owner’s “dominant” characteristics may also produce protective behavior in a dog.

If the male owner is the “leader,” then the dog is likely to follow its owner’s lead. This creates a protectiveness in the dog, as it is part of the owner’s pack.

Dogs who possess fewer dominant qualities often portray protective behavior through eye contact, which is not as blatant as guarding, but it still shows any threat to watch out.

Does the Gender or Breed of the Dog Matter?

Just like it is highly unlikely that dogs are more protective of female owners versus male owners, it is unlikely that the gender of the dog will make a significant difference as well.

Interesting READ  Why are Pitbulls so Aggressive? (4 reasons!)

However, if you are looking for a dog more prone to protective behavior, it might be a good idea to compare the differences between intact and “fixed” dogs and the various breeds so you end up with the right fit for you.

Has the dog been neutered or spayed?

When dogs reach maturity, specific hormones increase to prepare them for mating. So, whether a dog is “fixed” or not can make a difference in their overall disposition.

Dogs who have been neutered or spayed tend to be calmer and less high-strung than those who have not.

This is likely because the instinct to mate has been removed.

Discuss the pros and cons of sterilizing your canine companion with your local veterinarian.

The breed of a dog plays a large factor in its protective tendencies.

Dogs like German Shepherds, Dobermann Pinschers, and Rottweilers are frequently used for protection, be that police force, security, or even just a family guard dog.

Their temperaments are more inclined to safeguard rather than accept anyone who walks by.

Then there are more family-oriented dogs that are commonly used as companions rather than protectors. These dogs often include Golden Retrievers, Labradors, Boston Terriers, Pugs, or Beagles. Their dispositions tend to be more even-tempered, making them more apt to get along with other animals and new adults or kids.

It is important to remember every dog is different in its behavior, and the characteristics discussed above are general to each breed and not specific to dogs as individuals.

When looking at a dog’s protective tendencies towards gender, it is best to understand its background, particularly for adopted dogs as opposed to pups who have only been with one owner or family.

Factors that might influence a dog’s behavior towards a specific gender could be related to an abusive past.

A dog is likely to be wary of the same gender as its abuser, thus making it more inclined to be protective of the opposite gender.

If you have an adopted dog that comes from a good background, consider the gender of its previous owner.

Often, dogs will be more comfortable around things, or in this case, the gender it is most familiar with.

While it is recognized that most dogs are more comfortable with the characteristics of a female owner, it does not lead them to be more protective of females over males.

No one dog is the same, and neither are its owners when it comes down to it.

Factors regarding a dog’s protectiveness largely have to do with training and specific triggers. Still, it is highly unlikely that the gender of the owner will make a difference in generating protective behavior.

Can A Spayed Dog Still Give Off A Scent?

How To Introduce A Reactive Dog To A New Person?

What To Do If You Regret Getting A Puppy?