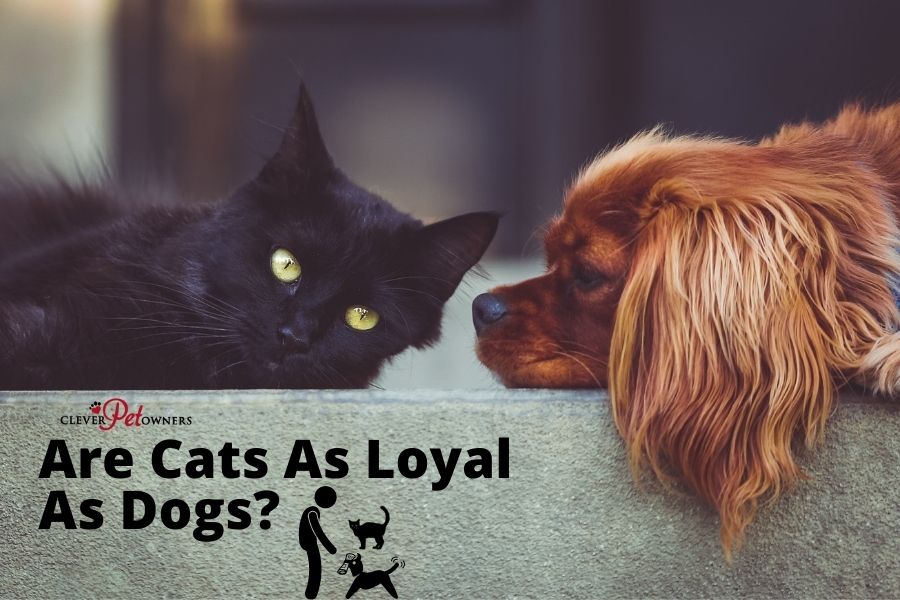 Cats and dogs, discussing how they differ and how they are alike, have been going on for ages.

Which one is better? Should you get a cat over a dog and vice versa? But one of the biggest questions is: are cats as loyal as dogs?

Looking at the overall picture of cats and dogs, it can be easily determined that dogs are more loyal than cats are.

A cat’s personality often remains independent and only offers affection on its terms. But this is not always the case.

Not every pet is the same. Your dog or cat may not be there when you most need it, or it may be loyal at the right times. Here is everything you need to know about loyalty in your cats.

Contents
I) Are Cats as Loyal as Dogs?
II) How Cats and Dogs Differ in Loyalty?
III) How Can You Strengthen Your Cat’s Sense of Loyalty?
IV) So, Who is Really More Loyal?

Are Cats as Loyal as Dogs?

Loyalty depends on the cat itself. Generally speaking, cats are often less loyal than dogs because they tend to be more independent than dogs.

Dogs often are right by your side, obeying whatever you command them to as long as you’ve trained them of that command. Although they can be trained, cats may not be as simply obedient.

But what is loyalty? It is a term with many different meanings depending on the person you ask.

A person may say obedience is loyalty, while another may say protection, at which loyalty will be different between each pet owner.

What is Considered Loyalty?

You will find that the term loyalty varies between each owner. It really depends on what you want from loyalty.

Some owners will want a pet that listens to them without objection, and a dog is perfect for this situation.

But some want a pet that will protect them in their time of need which both a dog and a cat may provide.

If you consider loyalty as a pet being by your side and doing what you ask, then a dog would be more loyal. Cats are not always obedient like this.

But you may end up with a cat that is more loyal than any of your dogs. Cats can be bold and protective, even if they are indifferent to you most of the time.

How Cats and Dogs Differ in Loyalty?

Cats are autonomous. This means they are very independent and don’t need to be constantly attended to as dogs do.

Dogs are often considered more loyal because they are more obedient. They are more likely to listen to you in hopes that you will give them some love as a reward.

They also tend to come to you to seek attention, so you don’t have to chase after them. Cats will ignore you or let you pet them whenever they feel like it.

So, in this sense, a dog feels more loyal.

Dogs can be Trained Easily.

Dogs can be trained much easier than cats. They are driven by not only your love but also food. So, you can use these two things to train them in the way you want.

When dogs are trained, they will be even more loyal to you because they understand that love, attention, and snacks come with your command.

But this doesn’t mean that cats cannot be trained.

Cats do have the capabilities to be trained in just as many tricks and commands as dogs. It may take a little longer, depending on your cat’s mood.

Cats will tell you when you are bothering them. They ensure that you know their boundaries, and this can be pretty intimidating.

When they set boundaries, you may think that they are disloyal, but in reality, they are just telling you what they are comfortable with.

Cats will put themselves first, most of the time. You see this with their boundary setting and ensure that they feel safe, secure, and comfortable.

You may see this as disloyal to you, but it shows that they are the highest of their priorities, and you may come to a close second. However, food or sleep may be before you.

But don’t automatically assume your cat will not put you first. There have been cases where a cat will go out of its way to comfort or even protect the ones it loves when it comes down to it.

There are videos out there where a cat has taken on a bigger animal as dangerous as a crocodile to protect its human.

How Can You Strengthen Your Cat’s Sense of Loyalty?

The best way to gain loyalty from your cat is to strengthen your bond with them. The more they like you and see you as a benefit to their life, the more likely they will stay by your side.

Strengthening that bond may vary depending on your cat’s demeanor. Remember, no two cats are the same and may need love shown in other ways.

Here are some ways you can strengthen your bond with your cat:

Show them love, especially when they seek it out from you.

Your cat may seem bothersome at times, but if they don’t normally show you affection, return the affection. They will see this as acceptance and love.

You don’t always have to treat them to special foods or treats, but give them a little extra snack every now and then.

Interesting READ  Why is My Cat Scared of Other Cats? (6 reasons!)

They will come to you more often in hopes of that treat. It could even be something as simple as catnip.

They will come to you when they want affection. You may not give them the affection you are used to, but it will show them that you love and respect them.

Protect them in ways that they see as protection. So, if a guest comes over and tries to hold your cat when it doesn’t like to be held, tell your guest to leave it alone.

You can also intervene if dogs or other animals are showing interest.

If they feel safe with you, their love and bond will grow more unbreakable, and your cat’s loyalty to you will be higher on their priorities.

Ensure that they feel comfortable at home. The home should be the place your cat feels the safest. If they don’t feel safe, you are at an increased risk of your cat running away.

Sometimes it can be hard to make your entire home feel safe. Your home is a shared space when you have children or other pets. But you can make your home safer for your cat.

Have areas of your home that your cat only accesses. These areas can be its safe spots so it can escape any chaos or uncomfortable interactions. Your cat will appreciate this.

Be Consistent with your Treatment of Them

Try to be consistent in the way you interact with your cat. They may feel unsafe approaching you if you suddenly blow up at them for something.

You don’t have to remain on a strict routine. Your cat will be fine with the change, but try to remain consistent in their interactions so they aren’t surprised by what you do.

So, Who is Really More Loyal?

So, who is more loyal: the cat or the dog? For the most part, dogs are more loyal.

A cat will run away if it doesn’t like you, and sometimes they don’t need to have a reason not to like you.

Cats are great at deciding what is best for them, and if you don’t fit that need, they will find somewhere else where that need is met.

Just remember that not all cats are the same, and not all dogs are the same. Dogs may run off because they are afraid, while a cat stays to fight off a big crocodile.

A dog may listen to every command and word you tell them, while a cat just walks off like you didn’t just tell them to do something.

It depends on the pet and its personality.

Is Coffee Bad For Cats

How Long Does It Take For a Cat To Get Used To a Dog?

How Long Does It Take A Cat Bite To Heal?

Why is My Cat Scared of Other Cats? (6 reasons!)

How To Switch My Cat From Dry To Wet Food?