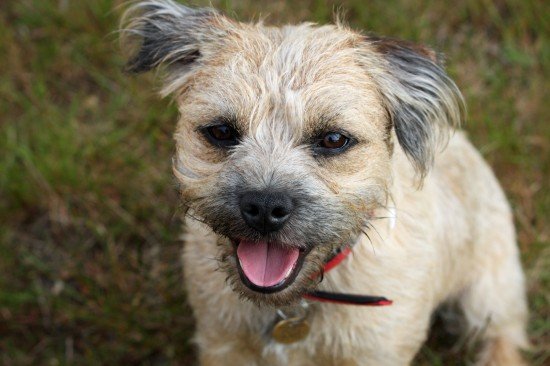 As a new or considering owner of a Border terrier, you might be wondering if these dogs are going to be loud like some of their other counterparts or if they’re going to be an especially loud addition to your household. You may be especially wondering if you live in close quarters with neighbors such as apartments, condos, or small subdivisions, as barking can quickly become a nuisance.

So, let me put your mind at ease with this article. There are a few different things to consider when adopting a Border terrier, so keeping in mind that they are by nature predators and also territorial, it is important to understand why your border terrier might be barking.

However, overall Border terriers are not excessively yappy and will most likely only bark to alert, protect, or when encouraged to be playful.

Contents
Why Your Border Terrier May Bark
6 Reasons Why You Need Not Worry
What About Puppies?
No, Border Terriers Are Not Yappy Dogs

Why Your Border Terrier May Bark

There are a few different reasons that you can expect your border terrier to bark. They are not exceptionally yappy dogs compared to some of their counterparts such as the Yorkshire terrier or Jack Russell terrier.

In this section we’re going to take a closer look at some reasons your dog might be barking.

Terriers have been bred from the very start to be hunting dogs. This is where their natural instinct to chase smaller animals such as squirrels or birds comes from.

Hunters have been specifically breeding terriers for the sport of hunting since the 18th centuries. So, on occasion, when your border terrier is barking, it may just be in his natural instinct to do so.

Another reason your border terrier is going to bark is going to be to alert you of something. This could be a knock at the door, a stranger outside, a noise they heard, other dogs barking, or seeing a squirrel or other small prey animal they see either from indoors through the window or outside on a walk.

Still, this is not going to be excessive barking and is simply a nice warning on occasion for instance if someone is at the door or there is something going on outside.

Terriers tend to be territorial dogs, so they may bark at other dogs when they are encroaching on their personal space. This can happen at the dog park if your border terrier feels threatened or simply does not want to share their space with a dog they don’t know.

This can also happen within the home with other dogs visiting or even other humans depending on how comfortable your dog feels and how well they handle people they don’t know.

Border terriers can sometimes bark out of boredom. Not so much as some other related dog breeds, but it can still happen.

As long as you provide your border terrier with enough attention, exercise, and toys–especially something to chew on–this should not be a top worry.

Border terriers, like any other dog, may also bark when they are being playful. This can occur often when playing with other dogs and is not always a bad thing.

It is typically very easy to distinguish between a playful bark and a territorial bark. This can also happen when interacting with humans, especially if the playful bark is encouraged.

Of course, this is not everyone’s ideal trick, but border terriers can become quite playfully vocal if egged on.

As opposed to barking at something or someone, this is a different type of noise from a bark and only happens on occasion. Mostly a howl is going to happen when your border terrier is spurred on by something.

This could include other dogs, sounds coming from a television program or Internet video, or another sound that they might hear in their surroundings.

From personal experience, I’ve had my Border terrier howl on a few different occasions. Rarely, he will wake us up in the middle of the night with a howl or bark from some noise we didn’t hear.

Once he started howling at an ambulance going by. I assume it was because of the sound of the siren that got him going. On occasion we like to get him going in a playful manner as he gets really excited that he’s encouraged to make noise and seems to have a lot of fun with the activity.

6 Reasons Why You Need Not Worry

Now that we’ve talked about the reason your Border terrier might bark; here are some reasons why you don’t have to worry about them being overly yappy dogs. Here’s a few reasons to put your mind at ease and your ears as well!

Border terriers are highly trainable dogs and it’s often easy to teach them that barking is not okay. Reinforcing good behavior encourages less barking and will let your dog know when it’s an okay time to bark and when it is not.

Border terriers are smart and quick to pick up on new commands and cues with proper training. They are also highly affectionate and will want to please you, so training them not to bark is not a strenuous feat.

Border terriers are usually very responsive to how you react to a noise or a knock at the door. They might let out one or two barks to alert you of the situation, but once they see you are not fazed by the noise, they will also quickly lose interest, many times replacing the barking with excitement to see who is at the door.

Making sure your Border terrier is properly socialized both with humans as well as other dogs will definitely help with barking. Your dog will be less likely to bark to assert their territory if they are trained to be used to other dogs and people being in their space.

Giving your dog plenty of indoor stimulation can keep them from watching out the window and barking at animals, people, or cars going by. This is not to say you shouldn’t let your dog watch out the window, as this is a way of providing stimulation in itself, but giving them enough to do such as interactive toys, a bone to chew, or something left on the television for noise distraction can greatly and easily diminish yapping behavior.

Border terriers have a very good temperament to begin with and, so naturally have less barking and territorial tendencies than other dogs in similar breeds. They need exercise and stimulus occupation but also spend a lot of their time cuddling, sleeping, or relaxing.

They can sometimes be lazy when lounging indoors. And, when it comes to socializing, they are naturally lovable dogs and will make friends quickly and easily, so barking is not usually a big deal in this instance.

This might be the only instance where you find you can’t get your Border terrier’s natural barking instinct under control. However; on the flip side, most of the time when your pup is on the hunt, they are going to be very quiet to try and sneak up on the prey.

Either way, this is usually not a concern for Border terrier owners.

Puppies might be more excitable and will have a higher chance of barking, especially since most training occurs in the puppy years. Start young with them so they know when to bark and when not to.

This is something that can easily be caught early to ensure your Border terrier is not overly yappy as they grow.

Some Things To Encourage Positive Behavior

No, Border Terriers Are Not Yappy Dogs

Overall, Border terriers are not yappy dogs. They bark sometimes and are more prone to it in some situations versus others.

There are many great reasons why your dog might be barking and they are very trainable so it is easy to discourage yappy behavior when they shouldn’t be barking. With proper training, Border terriers are great and obedient dogs that will not cause a ruckus in your neighborhood.

Why Schnauzers Are The Worst (And Best) Dogs

Traveling with an 8-week old puppy