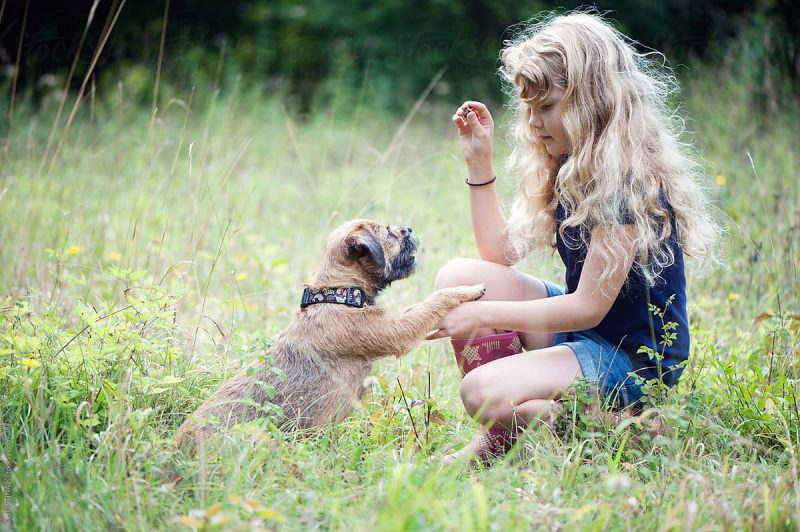 Like with any new pet, especially a dog, it’s important to understand the responsibilities that come with having a dog. One of those is going to be how trainable your new addition is.

This is important in many ways and especially in the sort of lifestyle you’re going to teach your dog. Are they going to be allowed on furniture?

Are they going to pull your arm off when walking them? Will they come when you call?

Or maybe you’re going to the extreme and want your dog to perform highly in shows or showings. Whatever the case, these are the questions that are most likely on your mind.

And, like most questions, there are a lot of different things that go into answering these. Some of them can be very circumstantial–especially when it comes to the stage in life you’re adopting your new dog.

Puppies are going to require different approaches than an older dog and each is going to come with their own struggles. However, the short answer to the question of if border terriers are easy to train is yes.

There are a few key reasons we can look at in this section to explain what makes border terriers dogs easy to train. This is not looking at any specific situation yet but only at the base nature of border terriers.

Border terriers are by nature a highly intelligent dog breed. This gives you an advantage right out of the gate.

Any breed of terrier is going to be quick to respond to cues, and, with repetition, will learn just about any words, commands, or actions you want to spend the time teaching them. They are also smart dogs that will find their own way of communicating with you that you’ll start to notice and look for while training.

Adding to the easiness of training your border terrier is the fact that, compared to some other breeds, the border has a milder temperament. They are often not quite as quick to bark or show aggression.

This makes them easy to take to public spaces to train around other dogs and humans. A border terrier, with proper socialization, is going to be happy with attention while also able to follow the rules you set down for them during training.

Border terriers are very affectionate dogs and will quickly warm up to their owners. This is a great advantage in training, as your border terrier will want to please you and do well.

Treats and returned affection are also a great incentive for your pooch to want to learn new and good-natured patterns of behavior!

Reason #4: Mind Of Their Own

This one is good when training, because border terriers, being highly intelligent, are going to know it’s in their best interest to quickly learn new commands and cues, since they will quickly learn the advantages these new behaviors come with such as treats or other incentives.

Border terriers are happy dogs and get excited about everything. This means when they quickly learn words like “walk, outside, park, buh-bye,” or any other happy words they will know exactly what is going on.

With such a positive nature, your border terrier is going to be thrilled to learn new commands and will easily pick up on anything that will result in a reward such as a treat or extra affection.

Although border terriers prove to be incredibly easy to train, there are a few things that might set you back in training the new dog in your life. These motives will not always cause problems, but are things to keep a lookout for when training a border terrier.

Terriers can be known for being territorial, and this trait can be seen in the border terrier breed. However, this is not typically something to worry about.

With proper socialization and reinforced good behavior, border terriers are incredibly loving and affectionate to both adults and children. Teaching your dog not to be territorial and negatively reinforcing bad behavior can easily solve this.

Border terriers are smart, but that does not mean they are smart enough to read mixed signals. When training a dog, it is important for you to properly train them by sending clear signals of what is good behavior and what is bad behavior.

Reinforcing good behavior with treats and affection is going to teach border terriers exactly what actions gain that reward. Be wary when disciplining. Like a child, you never want to forcefully hit or scream at your dog.

A firm voice or some kennel time will teach your dog when they are behaving badly.

Because border terriers have natural instincts to chase animals that are smaller than them, this puts a damper on being able to walk them unleashed or let them outside unfenced. Your border terrier will eventually come back but you don’t want to risk them taking off and getting lost, or, worse, taking off into traffic or something like that!

This does not mean border terriers are un-trainable, just that this is a difficult natural instinct to overcome, and one that you, realistically, might have to live with depending on how serious you are about training.

Training At Different Stages In A Dog’s Life

With any dog that you are adopting it definitely matters at what stage in your dog’s life you are adding them to your family. Puppies and younger border terriers that are still in the highly trainable age are going to be easier than a dog that has been around the block a few times.

Let’s take a closer look at what I mean.

Adopting your border terrier at the puppy stage is going to be both the easiest and hardest stage to train them in. It is the easiest as puppies are a blank slate and have no learned behaviors.

This means everything you train them to do will be new and easy to form into habits.

Saying that this is going to be the hardest age alludes to the fact that puppies are, in general, a heck of a lot of work. They require much more careful and watchful eyes, more attention, and more energy than a dog that is going to be older.

Interesting READ  Why Is My Dog’s Scrotum Peeling After Neutering?

So, training a puppy is going to be easy, as they will pick up the habits quickly and the cues will be more ingrained as they grow older; however, you will have to exert more energy as puppies have more vigor in general and will require more care and babysitting than older dogs do.

Two Years And Under

Dogs that are two years or younger are generally still accepted as being in the puppy stage and generally are easier to break bad habits. So, if you are taking in a border terrier that is still a young pup they are going to be very easy to train and break bad habits.

They will quickly adapt to your lifestyle and be listening and responding to your cues in no time. They will also warm up to you quicker making it easier to form an attachment for training.

Now, just because your pooch is a little on the older side does not mean that they are going to be impossible to train! As someone who adopted a border terrier that was already nearly five years old, I can guarantee it is still going to be pretty easy to train your new best friend, as we’ve had ours for just over eight months and he has responded great to our lifestyle!

He knows and responds to words like walk” and “outside,” as well as commands such as “go potty” and “sit.” He’s very aware of everything we ask from him and fantastic at picking up cues and commands.

Adopting a border terrier on the older side is not going to make training impossible; it’s just going to mean you have to have a little more patience! Like with any adopted dog, they are going to be accustomed to their previous owners, and it will simply take a bit longer for them to learn the new cues and behaviors you expect of them.

Also keep in mind adopted dogs can often have trauma in their past, so it may take them a little longer to attach and gain that loyalty and deep affection for you that border terriers are known for. Be patient and keep giving positive reinforcement!

Because border terriers are so easily trainable, they often make really good show dogs. This, of course, will pose it’s own challenges, but fear not!

Adopting a border terrier to be your next show dog could pay off big time. With their smart brains and agile bodies, these dogs can be trained to leap, jump, and run to the finish line–maybe even winning a prize along the way!

There are many reasons why border terriers are easily trainable dogs, and you definitely should not have this as a concern when adopting one of these scruffy, adorable little pups. Whether you choose to adopt right away from a puppy age or find one later on in their life, border terriers are great dogs that are easy to train and will offer all around affection when you bring them into your home.

Why Does My Dog Stare Into My Eyes?

Why Are Pitbulls So Sweet?

Why Do Small Dogs Lick So Much?

Why does my dog keep barking at the corners of the room?

Puppy Sleep Regression From 3 To 10 Months