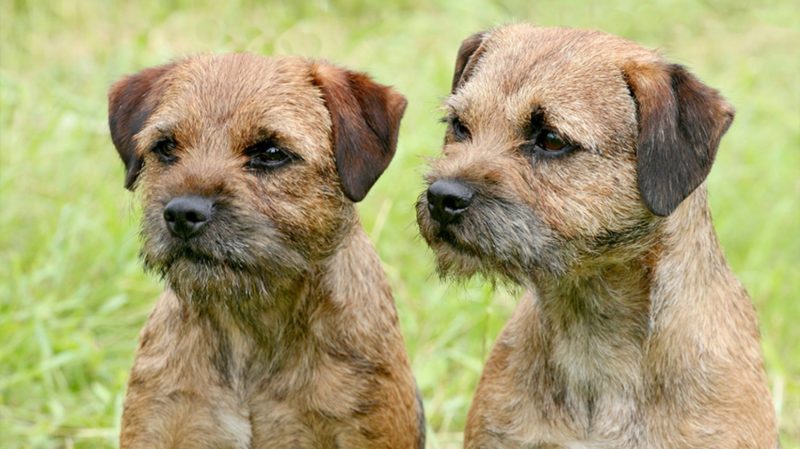 There’s always a lot to consider when adopting a new dog and them being affectionate toward their new owners is definitely high on anyone’s priority list. This can be especially important if you are choosing a dog that you want to have a close, cuddly relationship with and/or if you are bringing the dog into a family with children.

Some people might want more of a guard dog and, yes, Border terriers would make good guard dogs too, but they are definitely more interested in spending time with you than barking at all the neighbors.

Let’s take a look at a few of the reasons why you can expect your Border terrier to be affectionate as well as some training that will encourage the behavior even more.

Eight Reasons Why Border Terriers are an Affectionate Dog Breed

There are a few different reasons why your Border terrier is going to be affectionate towards their new owner(s). AKA you! Border terriers have a lot of great qualities, and it’s not hard to bring them out to the forefront so both you and them can benefit from the bond.

Here are just a few great reasons why your Border terrier is going to be affectionate.

Border terriers are incredibly loyal dogs and will form a strong bond with their owners when encouraged. Border terriers love fitting in with the family and will want to be around you, like most dogs, all the time once that original bond is formed, so it will come as no surprise when your Border terrier starts following you around the house and coming when called outside or at the park.

Border terriers definitely love being the center of attention. They get a little pep in their step when you’re praising them, petting them, or pampering them and that clearly shows in their behavior.

Once they grow accustomed to your behaviors and the household, they will also become exceptionally spunky, wanting to cuddle right up to you or even on your lap and beg for attention. They can never get enough pets and will always be looking for ways to receive attention or treats.

Border terriers love getting positive feedback from their owners, so pleasing you is something they are eager to do. This also plays into the fact that they love treats and attention.

This sort of behavioral instinct combined with the fact that Border terriers are a fairly smart dog breeds makes them very easy to train as well, which can definitely add to the overall great nature of them being affectionate. You pooch will be so excited that they did something well like come when you call or learn a new command that they will shower you with affection when they see how happy they’ve made you.

Interesting READ  Why Does my Australian Shepherd Follow Me Everywhere?

Border terriers are just eager little dogs in general and also get excited very easily. They are outdoor dogs, so they absolutely love going for walks, chasing squirrels, and even swimming.

And, good news, it’s really easy to bring this same excitable energy to your bond with them. Getting them excited is a great way to bring out more of their affection.

Border terriers will be easily excitable so to get them going is pretty easy. This type of excited interaction will be entertaining for you to watch and is also great fun for your pooch.

Side Effect of Being Excitable: Jumping

Border terriers are really athletic dogs and have crazy strong legs. Sometimes I feel like mine has springs in his legs because he can jump so high.

Because Border terriers are excitable and affectionate, they tend to want to jump a lot when they hear a word they like or when you come home from work. Training your dog not to jump is going to be something you will definitely have to do with Border terriers.

Border terriers, as stated above, love being the center of attention and will nearly always want to be involved in what you’re doing. Whether it’s going buh-bye, on a walk, or to the other room, they want to come too.

They also love being a part of fake wrestling matches, tickle fights, or even hugs. Whether it is you solo or you and friends, significant others, or family members, your Border terrier wants to be a part of it too.

They love being a part of the family, especially if there is any play time going on.

Border terriers are smart dogs and paired with being eager to please is a great platform that gives you a clean slate to teach your dog exactly what sort of affection you want from them. And, once they learn, you’ll be sure to have no doubts about how your dog feels about you.

For instance, I always give my dog smooches on his snout, and he has in turn learned to give me kisses on my nose as well. It’s quite adorable and always brings me joy knowing that he someone learned a command for the “kisses.”

Dogs are very perceptive creatures and have a high-functioning mind…well, at least of a toddler. Even so, talking to your dog is a great way to gain affection and strengthen bonds.

Talking to your dog is also a great way to teach them new commands as well as show new or different ways of affection. Talking to your dog like they are a child activates their excitable energy and makes them want to be around and bond with you even more.

Border terriers are a territorial breed so, once they bond with their owners, they are going to want to protect their humans from harm or danger. This is a great way to see their affection for you, even if you might see some other problematic habits such as barking or growling at both strangers as well as people you may know.

However, these are easily trainable behaviors that we’ll cover in the next couple sections.

There are a few things that serve as a hindrance when it comes to Border terriers and their affection. Here are just a few and some recommendations on how to handle it and some suggestions on how to encourage positive behavior.

Border terriers have a natural instinct to chase animals that are smaller than them. This can be a problem when it comes to other small animals that might be in the household, including cats.

Training your Border terrier to be affection towards these other critters can be difficult, but it also can be done. Good training can solve many and most problems like these for Border terriers.

Border terriers do tend to get jealous and can become so when you are showing affection to anyone else other than them. This can be cute in most instances, but you don’t want it to turn into something ugly, so it’s best to scold jealousy as a bad behavior and train them to share their territory with all other humans and animals they are around.

Many people can worry about their Border terrier around children. This is because Border terriers tend to be territorial and jealous, this is especially concerning around small children and infants.

A great thing is if you are planning to adopt a Border terrier as a puppy it will be very easy to teach them proper behavior and discourage some of their natural instincts.

Border terriers are a small dog breed and tend to like barking at both animals and strangers outside. Discouragement of this behavior as well as training to hinder barking habits is an easy, if not quick way to get rid of this habit.

Consistency with discouragement will teach your dog not to bark and, in the future, it may only be a rare occurrence problem, especially since Border terriers are eager to please, so they will want to make you happy whatever it takes.

Socialization is a great way to fix many issues that might arise with your Border terrier such as jealousy and territorial behavior. Socializing your dog with other dogs as well as humans of all sizes will encourage good behavior and proper affection.

Encouraging your dog to be affectionate with everyone and not just you is very important in teaching proper interactions and skills to your dog to be sure there is no worry about growling or chasing when it comes to taking your dog in public.

Border terriers are a smart, great dog breed to have around. They might require a little more work to get them up to par with their affection and form that strong bond, but it is incredibly worth it in the end when you have a dog that loves cuddling, wants to be around you, and might even know how to give you kisses.

Should I Wake My Puppy Up To Eat?

Will a Rottweiler Attack Its Owner?

Why Is My Dog’s Scrotum Peeling After Neutering?

Why are Pitbulls so Aggressive? (4 reasons!)

Can a Pitbull Breed with a Chihuahua?