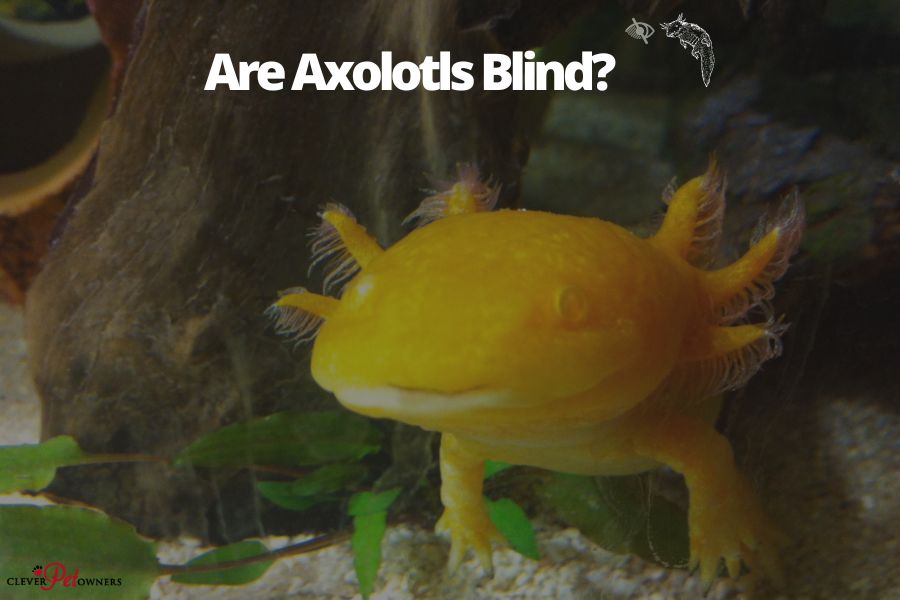 Some people think axolotls are blind, especially if you bring a new albino axolotl home. This is because their eyes somewhat blend in with the rest of their heads, giving them a unique look due to their albino trait.

To many people’s surprise, axolotls are not blind, but they have pretty bad eyesight.

This somewhat hinders them, which explains why they seemingly tend to bump into everything around their tank.

Continue reading to learn more about your pet axolotl’s poor vision, how they survive, and more!

Contents
I) How bad is their eyesight?
II) How do they find their food?
III) Are albino axolotls blind?
IV) Eyeless axolotl mutation
V) Can Axolotls become blind?

How bad is their eyesight?

It is virtually impossible to know exactly how terrible your pet axolotl’s vision might be, as the answer tends to vary amongst every axolotl.

After all, some axolotls can see way better than others, and various axolotls are even known to see much farther than other axolotls.

Yet despite their eyes having lenses that can focus light and retinas that can receive the light, they all generally have lousy eyesight that may change based on different variables.

Particularly for axolotls who reside in completely distinct environments, their quality of vision substantially varies amongst one another.

Their eyes, which can discern particular colors, will adjust to the various surroundings where they reside, resulting in vastly divergent perspectives on reality.

However, even though an axolotl’s vision is impaired, they are still adept at detecting and perceiving any form of movement within their tank.

They will often rely more on these strategies when they hunt for food.

They also employ other senses to ensure a greater understanding of their surroundings and to help them travel in the right direction.

Try to be wary of using any lights within your axolotl’s tank, and avoid using strong lights.

As axolotls lack any type of eyelids to block out the light, they are naturally quite sensitive to it.

Long periods of strong lights can even agitate your axolotl and make it very stressed in its tank, leading to other health problems and diseases as time passes.

Since they are nocturnal and most active at night, you may want to set up a day and night cycle for your lighting arrangement.

This helps maintain them in the most natural setting possible while giving them a nice break from the light.

If you must use lights in your tank, try to make sure that you use dimmed lighting.

How do they find their food?

Axolotls may not have the best ability to see, but they have learned to distinguish many types of food just based on their colors and appearance.

Unlike other animals, they barely rely on their eyesight when looking for food.

They will often use the help of other senses instead, so they can still find their food without issues.

Many axolotl owners find it much easier to feed their pets using a pair of blunt tweezers since they aren’t very good at sensing where their food is.

Interesting READ  How To Help a Stressed Axolotl

This method makes it much easier for them to find and eat their food, especially if it doesn’t move much.

They primarily search for food using their numerous sensory systems, such as their sense of smell and by sensing vibrations in the water.

Axolotls have a unique sense of smell (olfactory system), and it’s essential in helping them find food.

It’s most important when the food may be slow-moving or may not move at all.

For this reason, some axolotls won’t have any issues eating pellets or different types of freeze-dried foods that don’t move.

This is due to them giving off a distinct enough smell for them to be able to track them down effectively in their tank.

Yet, because of their terrible eyesight, this sense makes a big difference when tracking down food, and it plays a crucial part in their survival.

Axolotls also have a lateral line system that allows them to sense various movements or vibrations inside their tank.

Many other aquatic vertebrates, such as amphibians or fish, also have this sensory system to help them survive.

They can even sense movement inside the same room, so they’re likely to be able to tell when you leave and return.

Sometimes they cannot sense something in the tank if it isn’t moving, making it harder to feed them.

This further shows how it is a crucial part of helping them find food and being able to survive.

To some people’s surprise, their albino axolotl is not blind despite their possibly deceiving looks.

Axolotls’ pinkish white eyes naturally blend in with the rest of their skin, giving them almost an eyeless or unnatural-looking appearance.

Their eyesight is relatively the same as other axolotl’s, though they all have poor eyesight that varies in quality from axolotl to axolotl.

There is research that might suggest that albino axolotl’s eyes are more sensitive to light in comparison to regularly pigmented ones.

This is due to the melanin decreasing the light sensitivity in the iris of axolotls with normal pigmentation.

Because of this, you should exercise great caution when utilizing any sort of light in the environment of your albino axolotl.

Over time, even dimmed lights could easily stress an albino axolotl, which may result in additional health issues and diseases you’ll want to avoid.

Yet those who are interested in axolotls may know about those that have green fluorescent protein that allows them to glow in the dark.

While eyeless axolotls may not be as cute as other variations of the creature, they are just as interesting in their own way.

In one study, they even discovered this mutation not only makes them unable to form eyes naturally but also makes them sterile.

While axolotls are born without eyes due to abnormal eye development, the rare mutation of gene e completely prevents optic vesicles from forming.

This means that any axolotl that might be born with the e/e gene would never naturally develop eyes on its own.

The first ever one of these eyeless mutant embryos was initially observed by Dr. R. R. Humphrey from Winstar stock axolotls.

Even though it might not make much sense to say they can’t develop eyes on their own to many people, you’d be surprised.

This is because researchers tried grafting eyes into eyeless axolotls to be able to see if they could regain vision.

They found that those that received grafted eyes during an embryonic stage were able to establish a retinotectal connection.

Due to their well-known regenerative abilities, the axolotls were able to restore almost normal vision.

While this is cool, this surgery is not necessary for them to be able to live.

They might be entirely blind, but they have many other senses that they use to be able to find what they need.

This allows them to live a regular life with the possibility of some added assistance, especially during feeding times.

Axolotls can become blind, but usually only over time due to old age.

This is because they have great regenerative qualities that often help prevent them from getting to that point.

They’ve even been known to regenerate parts of their eyes while still being able to maintain about the same quality of vision.

This makes it unlikely for them to go blind for any other reason.

There are a few other causes other than old age that may cause your axolotl’s vision to worsen and possibly go blind at a younger age.

It is important to be wary of these causes regularly, as they can all lead to other serious health issues as time passes.

These other causes could be things such as:

It can be challenging to determine if your axolotl is blind or not.

One way to tell is if they appear to have cloudy eyes and tend to need more help than most axolotls do during their feeding times.

If this is the case, there is always a possibility they could be going blind.

Blindness from something other than old age is generally unlikely, though.

This means you should reconsider the tank conditions or set up to see if it could’ve possibly been harming them over time if they aren’t old yet.

How to prevent blindness

Make sure to avoid strong lights in tank setups and think about a timer for a day and night cycle to make the amount of light exposure shorter.

By doing this, you are preventing blindness from developing in any of your axolotls.

Make sure you do this if you’re concerned that damage has already been done or want to prevent it from worsening with time.

It is also always good to be mindful of anything that looks pointy or sharp that they could bump into; after all, their vision isn’t great, to begin with.

After all, they are bound to bump into anything you might put into the tank.

Do Axolotls Have Emotions?