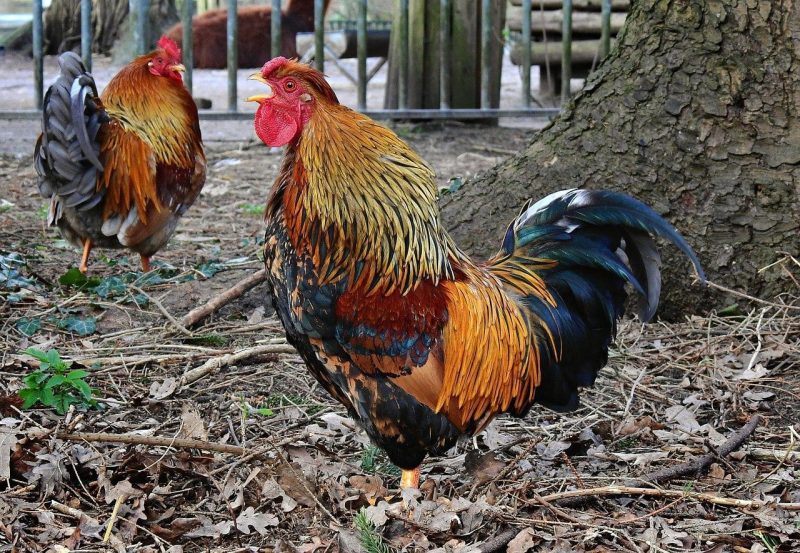 We have all heard the old adage, “waking up with the chickens.”  Even those who didn’t grow up around those fine feathered fellows know that roosters crow every morning, and that is the indication that it is time to get the day underway.

But those of us who have been around those rowdy roosters know they don’t JUST crow at dawn’s early light.  Many of them will crow throughout the entirety of the day.  Though this can be annoying to you and your neighbors, for your chickens, that rooster sounding off all day is probably doing it for their benefit.  Well, for the MOST part, he is.

As a “rooster mom or dad,” it will be to your benefit to precisely understand what makes your rooster crow during the day.  While there are times he is simply being the cock of the walk and crowning because he can, there are times that he is alerting you and the rest of the flock to some bad happenings around the chicken coup, so it is beneficial to you and your other chickens to listen for and understand why your rooster is crowning throughout the day.

Contents
I) Why Does My Rooster Crow All Day
II) I Can’t Take it Anymore, or I Could Get Fined Because He is Too Loud. What Now?
III) Final Thoughts on Your Rooster’s Vocalization

Why Does My Rooster Crow All Day

While it is not possible or realistic to think that you should run every time your rooster crows during the day, it is good to try to take note of his different crows and their intensity just in case there is a chicken emergency going down.  Knowing the possible causes of his constant crowing is crucial.

It’s THAT Time of Day

As we have already discussed, it is far from uncommon for your rooster to begin crowing before the sun rises.  As a matter of fact, it is expected.  The reason roosters crow early in the morning had to do with their circadian rhythms.

Just like with humans, the circadian rhythms of roosters let them know that it’s time to wake up and get their day started.  Roosters crow to let the others in their flock see that it’s time to get up and get started with their day.  You didn’t think that saying “the early bird gets the worm” just took on for no reason, did you?

Sometimes, if you have more than one rooster or if another rooster lives within crowing distance, this might be a bit problematic if that other rooster’s circadian rhythms tend to wake them a bit earlier than your rooster.  To keep up, your rooster will usually answer that call regardless of whether he is ready to get up and get the day started or not.  He can’t let the neighbor’s rooster outdo him, can he?

There’s a Rumbly in His Tumbly

Just like you, a rooster will get grumpy if he is hungry or thirsty.  If he or his fellow fouls are foodless, you can expect him to fuss about it.

If you notice noisy behavior out of your rooster, see if he’s low on provisions and resupply him, and if he tones the crowing down, you have just figured out one way to stop a crowing fit before it gets going.

If your rooster is crowing at odd hours of the day or night, and you have checked to make sure he has plenty to eat and drink, he could be alerting the others of potential danger.  His crows are also an attempt to scare the predator away, thus protecting his fellow chickens.

Interesting READ  Why is my chicken shivering and shaking its body?

If you notice that his usual crow is replaced by a more intense sound, that is a good indication that he senses danger.  That type of crow seems to be reserved as his warning to the stranger that there will be trouble if they continue their approach.  And if you have ever seen a rooster fight, that predator would be wise to heed his call and get away from his house.

He Is Looking to Get Lucky

Because he is the cock of the walk, rooters use their crows as a mating call to attract the ladies.  Unfortunately for the humans who have to endure his incessant sounds, a rooster tends to be most potent sexually either very early in the morning or late in the evening.

Also, interestingly, roosters are not gentlemen, and they love to kiss and tell.  They tend to crow loudly when their lady love lays an egg to let the others know of his strong male prowess, and his mating was successful—what a braggart.

Your Boy is Bored

If your rooster is confined to a small space, he could possibly be crowing just to hear himself “talk.”  He has nothing to do other than tend to his flock, and he may just require some “me time.”

If possible, if you notice that this is the issue with your rooster, try to allow him to “spread his wings” so that he has something new to occupy his time.  This should cut down on his crowing if his doldrums are dealt with.

Another possibility for your rooster’s rowdiness is that he feels another rooster is trying to move in on his territory.  This is where pecking order comes into play.

He has to show the challenger that he is not backing down.  Though cockfighting is a common thing, for the most part, roosters try to avoid physical confrontation when possible.

If a rooster is injured in a dispute, then the other routers will catch wind of his wounds, and they are likely to “peck him to death.”  Chickens are mean critters, and they sniff out weakness.  If another rooster sees the opportunity to take over the roost, he will take it, and your injured rooster is probably about to sing his swan song.

To avoid this from occurring, if you can get the opposing rooster out of the area, the alfa-rooster will not only be out of danger, he will probably stop yapping because the threat from his competition has been removed from the picture.

He’s Too Much of a Lady’s Man

Another possible reason your rooster crows constantly is that he does not have enough hens in the house.  Along the same line with him being bored, he wants to have more responsibility and more hens to tend to.

It is also vital that you do not separate the rooster from his flock during the day.  If you, his crows will be his way of punishing you for getting him away from his girls.

He’s Not a “People Person.”

In general, chickens do not like to be disturbed (Oh, the irony!).  If your chicken coop is too close to stimuli, then your rooster may be crowing to announce his displeasure.  Ensure that you house your chickens away from road noise and glaring headlights if you live near a populated or high-traffic area.

Interesting READ  How Long Should I Let My Chickens Free-Range?

Also, it is a good idea to keep your chicken coop away from other animals that might disturb them.  Who knew that a bird could be passive-aggressive?

Your rooster may be crowing for no good reason at all.  He could just be crowing because he can.

Try to think of it like you’re doing your thing, and you suddenly break out into song or start talking to yourself.  There is no reason you are making noise, but that doesn’t stop you, does it?  The same goes for our fine feathered friend.

I Can’t Take it Anymore, or I Could Get Fined Because He is Too Loud. What Now?

If you are so disturbed by your rooster’s crowing or you are afraid that he is breaking a city noise ordinance, you do have recourse, but none of it is going to make you or your rooster happy. Things you could opt to do are:

Final Thoughts on Your Rooster’s Vocalization

If you have taken on the responsibility of raising chickens, you need to understand that your rooster will crow when he feels like it, or he needs to, whether you like it or not.  If you cannot deal with the racket, maybe becoming a “rooster mom or dad” is not a venture you should attempt.

There are drastic measures that can be taken to avoid your rooster from rousing the neighborhood, but be cautious about which of those options you choose. Often the things that are making your rooster crow out of turn can be prevented if you pay enough attention to the wants and needs of your main man in the chicken coop. Put yourself in his shoes, so to speak.

Hopefully, you will either become accustomed to your rooster crowing when nature tells him it’s time, or you can also learn why he is vocal and try to help him out if he can’t help himself.  If you can, then your rooster can be your boy for a long time to come.

How Do Chickens Show Affection To Humans?

Why Do Chickens Peck Each Others Bottoms